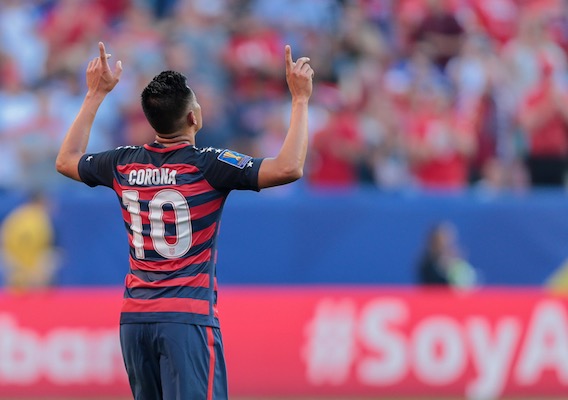 Corona on the move, Sargent speaks, and presidential race update

Thursday begins with news that Joe Corona is one the move, Jonathan Gonzalez earns a nice award, and the candidates for U.S. Soccer's presidency are becoming more clear.
BY Brian Sciaretta Posted
December 14, 2017
6:00 AM
THE STEADY STREAM OF NEWS continued into Thursday starting with the deadline having passed for U.S. Soccer presidential candidates having passed and much more news from Americans abroad.

Most of the MLS news reported earlier in the week finally became official as Giovanni Savarese left the Cosmos with an announcement in Portland expected soon. Nagbe is now a member of Atlanta United.


Darlington Nagbe officially joined Atlanta United in $1.05 million in allocation with that number to increase should Nagbe hit specific benchmarks in 2018.

With that trade, Atlanta should be even more fun to watch next season with a midfield that includes Miguel Almiron, Hector Villalba, and Julian Gressel. The expectations are that Atlanta should win the possession battle in just about every game. Then when you add in forward Josef Martinez along with the potential addition of Argentina U-20 attacker Ezequiel Barco, the team should be able to score at a very high rate.


Joe Corona has had a remarkable career with Club Tijuana where he scored the decisive goal in 2011 that sent the club to the Mexican top flight for the first time. That year, he also scored the club’s first ever goal in Liga MX. In the 2012 Apertura, he started and won Tijuana’s first and only Liga MX title.

But now Corona, 27, is on his way to Club America on a year-long loan in what will be the third loan of his career. Club American, however, is a step up as it is Mexico’s most high profile team and plays its games at Estadio Azteca. It has won Mexico’s top flight 12 times and won the Copa MX five times. Last season it finished in third place and advanced to the semifinals of the playoffs.

If Corona can break into America’s starter lineup it would be a major boost in his profile.

US Soccer Candidates down to 8


US Soccer’s presidential campaign is highly secretive and much is kept private. At first there were nine candidates but now we know that one was trimmed at the deadline – presumably due to a lack of supporting letters.

The missing candidate appears to be Paul Lapointe based on this tweet.

I would like to thank you all for the amazing support you gave me during this historic election process. I entered this election to help effect change and usher in new ideas to support you.

But then on Thursday came word via Jeff Carlisle that U.S Soccer was looking to redfine the role of the president in the middle of this election while also creating a general manager position. If that were the case, this election would be for a weaker position than the one held by Sunil Gulati. While a GM position is sorely needed to focus on national team issues, a weaker president and a "consensus" building framework seems to be creating an organization capable of decisive leadership, which could very well be needed to make true change. We will see in the months ahead.

Jonathan Gonazalez had a great year in a standout debut season with Monterrey and now the California teenager continues to receive accolades. Monterrey had the best record in the Liga MX Apertura regular season but fell to Tigres in the final. Gonzalez made 22 appearances in the Apertura with 20 starts.

But that only tells part of the picture. He developed in recent months into a very smart and steady central midfielder who could win balls, force turnovers, and play a simple but effective game.

The result is that Gonzalez was named to the Liga MX Best XI by Diario Record.


In case you missed it, ASN had huge feature on young American forward Josh Sargent. In the extensive interview Sargent goes over his reasons for signing for Werder Bremen, his concern for MLS, and his international ambitions.

Definitely check it out.

In the Eredivisie, Matt Miazga went a full 90 for Vitesse in a 2-2 draw with Willem II. Miazga was busy as he led Vitesse with six clearances.

In the Premier League, DeAndre Yedlin went a full 90 in a 1-0 loss to Everton. Newcastle is struggling but Yedlin was decent on the game with a very high number of touches for a fullback (80) and a solid pass completion percentage of 84%. Still, his crossing and final balls need to be dangerous but defensively he was strong.

In the Bundesliga, Weston McKennie went a full 90 in a 3-2 win over Augsburg. While he was not part of any goals, McKennie played further up the field and has shown that he is growing nicely into his attacking responsibilities.

Timothy Chandler was very good on Tuesday notching two assists in a 2-1 win over Hamburg. It marked a strong return after missing two months due to surgery. On Thursday he was named to Kicker Magazine’s Bundesliga Team of the 16th Round of the Season