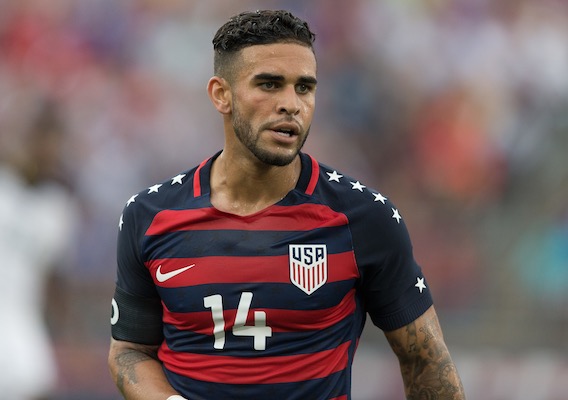 Beyond the freaking headlocks and broken printers, the MLS coaching scene has been on fire of late. Also, a Dom Dwyer-Cyle Larin partnership in Orlando might give opposing defenders nightmares.
BY Franco Panizo Posted
July 28, 2017
11:00 AM

A MIDSEASON TRADE has Dom Dwyer back at Orlando City. Just in time for a big showdown, too.

Orlando City will visit Atlanta United in a rematch of last week’s tight encounter in Central Florida, and the match-up at Bobby Dodd Stadium could and probably will mark Dwyer’s MLS debut with the Lions. Yes, in case you missed it amid all the CONCACAF Gold Cup final hoopla, Sporting Kansas City dealt its top striker to Orlando this week in exchange for a record bit of funny money.

Dwyer previously spent part of the 2013 season on loan with the then-lower division Lions, honing his craft while helping the team claim the USL crown before returning to Sporting KC and winning the MLS Cup later that year. It is no secret then why he is a beloved figure in Orlando.

What this means for Orlando in terms of how it moves forward on the field remains to be seen, but we might catch our first glimpse of how a Dwyer-Cyle Larin partnership works (or doesn’t) this Saturday when the Lions try to exact revenge against Atlanta after falling to the expansion club last week.

There were already some good subplots going into this one, including Brad Guzan playing in his first Atlanta home game, and fervent support in the stands should once again be on display in this Saturday afternoon rematch (which will be aired on FOX). That makes this game as juicy as any this week.

Another reunion is taking place this weekend in Los Angeles. No, we are not talking about Bob Bradley returning to Southern California, though that did happen this week with his appointment as LAFC’s first head coach.

Rather, we are talking about Sigi Schmid becoming the LA Galaxy manager—again.

Schmid was given the reigns while Curt Onalfo was (unsurprisingly) given the axe this week, and the move marks Schmid’s return to the Galaxy some 13 years after he left with some hardware in tow. Much has changed about the club in that time, but its ultimate goal of lifting trophies has not. Schmid is being tasked with moving LA back to the top of the MLS food chain, and his first challenge in trying to do is a doozy.

The Galaxy will host the Seattle Sounders in Saturday’s late game, and the showdown between Schmid and the side that dismissed him last summer will add sizzle to what is already a star-studded affair. Los Angeles badly needs a win here, too, as it currently sits in ninth place in the Western Conference standings and is five points behind the final playoff spot.

Schmid is unlikely to make sweeping changes after just being given the job on Thursday, but his approach to the game—he will not have new Designated Player Jonathan dos Santos available for selection—should at the very least give us an idea of the identity he is looking to implement for the Galaxy.

Two other coaches will have plenty of eyeballs on them this weekend after some headline-grabbing postgame rants about officials in the past week. The kicker? They are going up against each other.

Mike Petke and his Real Salt Lake troops will welcome Gregg Berhalter and Columbus Crew SC on Saturday, and both managers will want to get back to putting the focus on their players rather than themselves. Columbus will have the tougher challenge here, as it is playing away from home and also on short rest following a midweek loss to the Philadelphia Union.

We might not see another press conference tirade after this bout. Or we might. You never know, especially when it comes to Petke and his unreliable printer.

U.S. national team players may still be on a high from winning the Gold Cup on Wednesday, but several of them might have to reshift the focus to their club teams.

With a full MLS schedule on tap this weekend, it's likely that most, if not all, of the U.S. players returning from international duty will see the field. How they perform during this second half of the season is something to keep an eye on, including Toronto FC ace Michael Bradley after his Golden Ball-winning performances at the Gold Cup.

Another player to keep close tabs on is Seattle forward Jordan Morris, who has not had a great campaign to this point but may have gotten the lift that he needed with Wednesday’s decisive strike in the championship bout vs. Jamaica. Others worth following are FC Dallas midfielder Kellyn Acosta, given his flat showing in the regional tournament, and oft-criticized Sporting Kansas City right back Graham Zusi.