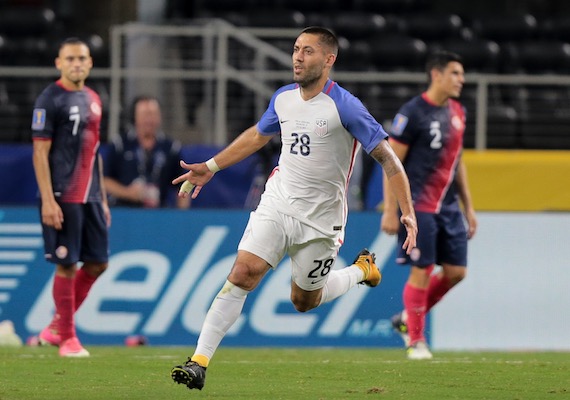 Clint Dempsey Comes to the Rescue, Lifts U.S. to 2-0 Win

Bruce Arena's Starting XI couldn't get the offense going but everything started clicking for the Yanks when Dempsey came on as a substitute after the one-hour mark. The win sends the U.S. to the Gold Cup final.
BY John Godfrey Posted
July 22, 2017
4:00 PM

EIGHTEEN SECONDS into Saturday's Gold Cup semifinal against Costa Rica, U.S. national team forward Jordan Morris got on the end of a Jozy Altidore pass and blasted a shot past goalkeeper Patrick Pemberton. Unfortunately for the Seattle Sounders striker, the shot caromed off the near post and away from danger.

Despite this promising early outburst, the Yanks struggled to solve a stingy Ticos team that was content sit back and play a counterattacking style. In fact, the Yanks could not manage a single shot on goal until the 65-minute mark.

But then Clint Dempsey changed the course of the game. He came off the bench to spark the offense, earning an assist on Altidore's strike in the 72nd minute and then scoring off a spot kick 10 minutes later to seal the victory.

The U.S. will now play in the Gold Cup final Wednesday night, squaring off against the winner of tomorrow's Jamaica-Mexico contest.

The Yanks looked good early on—confident, organized, and aggressive—but a lack of inventiveness made it easy for Costa Rica to sit back and stymie the U.S. attack. The Americans' wide play was lacking, forcing Darlington Nagbe to generate most of the offense through the center of the pitch.

The U.S. nearly opened the scoring at the 15-minute mark when Costa Rica turned the ball over in its own half and Paul Arriola crossed to Morris at the top of the penalty area. Morris put Altidore in behind his defender but the Toronto FC man opted not to shoot and instead attempted a low-percentage pass to Kellyn Acosta, who lifted the ball over the net.

There were multiple sequences like that: good possession but a lack of inventiveness and/or quality close to goal.

Costa Rica, meanwhile, did not see much of the ball in the first half.

But the visitors did register the first shot on goal at the 37-minute mark when Bryan Ruiz danced past defenders and cut through the center of the pitch. He found Marcos Urena in the U.S. penalty area and the striker targeted the far post with a right-footed shot.

U.S. goalkeeper Tim Howard, who had little to do until that point, stuck his leg out to block the shot and kept the game scoreless. It was a huge save from a big-time player.

At halftime, the U.S. had the better of the play but lacked that final bit of quality necessary to take the lead.

Seven minutes into the second half the Yanks nearly took advantage of a major goalkeeping gaffe. After Omar Gonzalez pushed down the right wing and found Morris in the box, Pemberton charged out of the goalmouth and tried to break up the play. Morris dribbled wide, however, and left the Costa Rican keeper in no man's land. As Pemberton scrambled back to goal, Graham Zusi placed a cross into the box that soared just over Altidore's head and proceeded to bounce through Darlington Nagbe's legs.

The Americans came close, again, but were not good enough. In fact, they managed their first official shot on goal in the 65th minute when Altidore let loose with a long-range (and very optimistic) blast that Pemberton saved easily.

Clearly, this U.S. Starting XI was not going to solve Costa Rica's defense.

So Bruce Arena made a change, taking Paul Arriola off and replacing him with 34-year-old Clint Dempsey. The game opened up for both teams.

In the 68th minute Dempsey pushed forward and made a clever pass at the top of the Costa Rican penalty area that gave Acosta a half-chance on goal. The FC Dallas midfielder unleashed an impressive blast but Pemberton parried it away.

Urena nearly put the Ticos ahead three minutes later when he fought off Omar Gonzalez and tried to sneak a shot past Howard at the far post only to have the Colorado Rapids backstop make a crucial leg save.

Before anybody could catch their breath, Dempsey's creativity produced another chance. The veteran worked his way through the center of the Costa Rican defense and then feathered a lovely pass that sent Altidore in alone on the left flank. Pemberton rushed out to quash the chance but Altidore cooly lifted the ball past the sliding goalkeeper to give the U.S. a 1-0 lead.

The visitors stepped up their efforts to even the contest but Dempsey put the game away in the 82nd minute when he curled a 25-yard free kick around the Costa Rica wall and inside the near post. It was Dempsey's 57th strike for the national team, tying him for the all-time record with Landon Donovan.

For the first time since the friendly against Ghana the U.S. put on a complete performance, controlling the tempo of the game and playing with cohesiveness despite a lack of quality close to goal.

Next up: Either Jamaica or Mexico at Levi's Stadium in Santa Clara, Calif.

What did you think of the match? Feel like this U.S. side is primed to lift the Gold Cup? Share your take below.