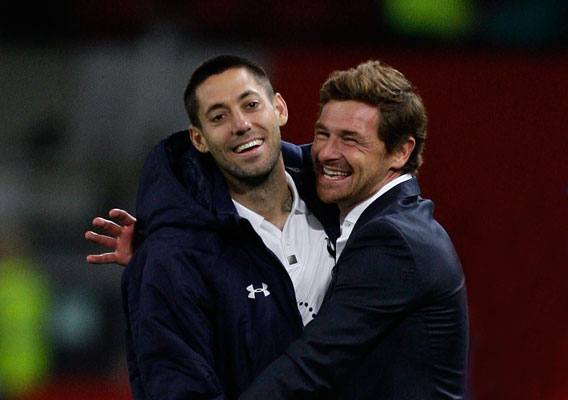 Clint Dempsey and AVB: Could This Really Work?

Quick passes, fluid movement, and Dempsey's knack for putting the ball in the back of net all bode well for his high-profile move across London. This Spurs thing is looking better and better.
BY Graham Ruthven Posted
October 06, 2012
4:36 AM
Before we dive headlong into the analysis of Clint Dempsey's move to Tottenham Hotspur, let's remind ourselves of some key statistics.

Dempsey completed 23/28 passes against Manchester United, giving him a completion rate of 82%, a marked improvement over his only other start for Spurs, against QPR, where he completed just 21/31 passes, with a rate of 68%.

Dempsey has improved his goal tally year-on-year since he arrived in England in 2007. In his first season he scored just once. Last season he found the net 23 times.

Dempsey was the top scoring midfielder in the English Premier League last season.

In terms of city, culture, and even language, Dempsey, ranked No. 1 in the ASN 100, will no doubt feel at home at his new club. And the upside for the player, moving from mid-table mediocrity at Fulham to top-four contention with Spurs, is clear. But in making the move across London, a new challenge presents itself to the Texan. He has joined not just a team but a project. The study of Tottenham manager Andre Villas-Boas is a compelling one. Supporters and media have attempted to decipher his methods and practices since his arrival in English soccer. His failure and ignominious departure with Chelsea has only further captivated those who observe him. And after a slow start at White Hart Lane to start this season (just a single win in his first four league games) he soon found his abilities under scrutiny there too. His team selections were questioned, along with his transfer policy. Why had he overloaded on attacking midfielders in the transfer window? How would Dempsey fit into the side? However, Saturday’s 3-2 win over Manchester United at Old Trafford offered something of an insight into how Villas-Boas envisioned his system, with Dempsey a pivotal figure. It looks as though the coach and player could be a perfect fit. By the yardstick of statistical analysis, Dempsey’s new role appears to focus on short exchanges and combinations between what is essentially a central midfield four including him, Moussa Dembele, Sandro, and Gylfi Sigurdsson. Against Manchester United, Dempsey attempted 28 passes in total, 23 of which were made to one of his midfield teammates. Perhaps even more telling of the American’s new responsibilities, he only attempted one long pass in the entire match, completing just a single pass in the attacking third. Of that midfield four, Dempsey’s role is the most fluid. With Dembele also joining Spurs from Fulham in the summer and Sigurdsson recruited from Swansea, Villas-Boas has three naturally attacking central midfielders who would be comfortable between the lines of midfield and attack. That fluidity in Dempsey’s game can be traced through his pass stats, with Dembele and Dempsey forming Spurs’ most common pass combination against United, with Defoe exchanging more passes with Dempsey than any other player. At times Dempsey became something of a second striker alongside Jermain Defoe. As an attacking midfielder, this is to be expected. But with Defoe’s tendency to drift wide to exploit the channels, Dempsey is often left as the most advanced apex of attack. The same was evident in the previous week’s win over Queens Park Rangers, with Dembele and Defoe using Dempsey as a pivot in a stacked system. The American displayed his importance to the Spurs attack by having six attempts on goal, more than any other player. Many would describe Dempsey’s new role at Spurs as a free one, but the American is pivotal. His role in Villas-Boas’ team might have been clouded initially, but he has a clear purpose now that the system is settling. But how does his new role at Spurs differ to the one he fulfilled to great success at Fulham? There are some similarities. From a chalkboard perspective, Dempsey still occupies the same space on the field as he did under Jol. One difference was in the relationship he formed with Pavel Pogrebnyak, an altogether more traditional frontman than he finds in Defoe at Tottenham. One aspect of Dempsey’s game at Fulham that hasn’t yet transferred across to North London is his aptitude as a wide midfielder. Of course, with players like Gareth Bale and Aaron Lennon at his disposal, Villas-Boas is hardly short of options on the wings. And with Dempsey’s positioning and technical foundation facilitating Bale and Lennon to stretch the playing area—much like how Dani Alves does at Barcelona—there’s little incentive to move Dempsey outside. Despite a generally positive start at his new club, Dempsey has yet to fully integrate himself into Villas-Boas’ style of play. (In all fairness, his teammates have not either.) Saturday’s win at Old Trafford gave a glimpse of what such a system can achieve if performed properly, but there were times when the new Spurs number two looked disconnected from play. That might have been due to Manchester United’s dominance with possession: the Red Devils had the ball 75 percent of the game. But it’s hard to argue with Dempsey’s definitive contribution, seeing as he netted the game-winning goal. If Dempsey and his Spurs side can repeat the same flawed performance with the same outcome against Aston Villa this weekend (10am ET, FoxSoccer2Go; ape-delayed at noon on Fox Soccer Plus), success will rightfully be hailed. In any system, even Villas-Boas’, goals and wins remain the purest statistic. Scotland-based freelance writer Graham Ruthven is a regular contributor to the New York Times. This is his first piece for AmericanSoccerNow.com.