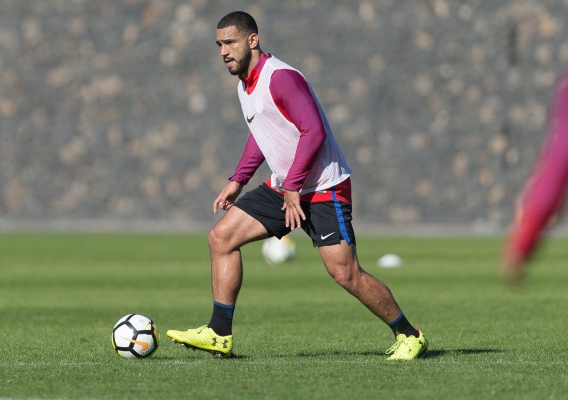 Carter-Vickers seeking to earn a bigger role on the USMNT

The United States national team camp is underway in North Carolina and ASN's Blake Thomsen caught up with Cameron Carter-Vickers who is looking to seize the opportunity and emerge as a key player along the backline
BY Blake Thomsen Posted
March 19, 2018
6:20 PM

CARY, N.C. - To many fans and observers, this current United States national team camp is of little importance. There are no meaningful games on the horizon and the team has no permanent head coach. But the 23 player roster contains many young players and several newcomers who are eager to make the most of the opportunity. Among them, few have more to prove than Cameron Carter-Vickers.

The 20-year-old Tottenham Hotspur center back has just a single cap to his name, but, given the dearth of experienced center backs in the squad, he has the inside track to a starting position alongside Matt Miazga in the friendly match against Paraguay on March 27.

“[Center back] is a huge position up the middle of the field, and watching both Matt and Cameron, each have been logging significant minutes and playing important roles for their clubs,” interim coach Dave Sarachan said. “Each made a good impression on me when we had them in our roster against Portugal last November, and I think this is just a continuation of giving these guys more minutes in a game in an important position for us. It’s a great opportunity for them.”

It has been a big year for Carter-Vickers, who has impressed in 32 league appearances on loan in the English Championship split between Sheffield United and Ipswich Town.

Though Carter-Vickers made a few cup appearances for Tottenham in the 2016-17 season, his appearances for Sheffield and Ipswich are his first professional minutes in league competition. With the national team, the English-American put in a strong second-half performance in his USMNT debut in the 1-1 draw between the U.S. and Portugal last November.

Speaking to ASN about the opportunity to continue establishing himself with the national team, Carter-Vickers sounded confident and grounded on the opening day of the nine-day camp.

“It's always tough to get a starting place and get minutes on the pitch," the English-born Carter-Vickers said. "But I feel like the Portugal camp went well for me and I think it went well for the whole team as well.”

Carter-Vickers sees himself as part of the emerging young core of USMNT players in Europe, and he has been impressed by the number of young Americans getting first-team minutes in top professional leagues around the continent.

“I feel like a lot of us now are playing good minutes at our clubs across all different countries and in different levels,” he said. “That definitely helps with everyone playing more games and building more experience that will hopefully translate over to the national team level. We’re all aiming towards trying to be the best players we can be and get as many call-ups as we can. We want to help the team and help the progression of U.S. Soccer.”

In his first taste of regular first-team experience, Carter-Vickers has been pleased with his development over the past seven months.

“It has been a good season,” he said. “I’ve played a lot of games, and it’s definitely helping me develop as a player. The Championship is a very tough league. It's very physical. You often play two times a week. Mentally you just have to be prepared to keep going.”

While U.S. fans would have loved to see Carter-Vickers break through at Tottenham this season, it was always going to be hard to unseat established stars Toby Alderweireld, Jan Vertonghen, and Davinson Sanchez. More than anything, Carter-Vickers needed regular first-team action, and he has gotten that in abundance in the English Championship, a terrific league for center back development.

In light of the heavily youth-focused nature of the current camp, it is difficult to pinpoint exactly where Carter-Vickers is on the USMNT center back depth chart. But a strong performance next Tuesday alongside Miazga, his longtime youth national team center back partner, could go some way toward establishing Carter-Vickers as a major piece of the U.S. defense moving forward.

Looking at the mix, there are a lot of questions. Gonzalez is 29. Ream, Besler, and Cameron are all in their 30's. If, as expected, the next manager of the USMNT favors younger players as the U.S. moves toward Qatar, Carter-Vickers could be streamlined into the top three of the depth chart along with Miazga and Brooks.

All told, Carter-Vickers is confident and in-form ahead of a game that represents a major early opportunity in his national team career. Don’t be surprised to see him seize the opportunity with both hands and continue establishing himself as a bona fide first-team option moving forward.