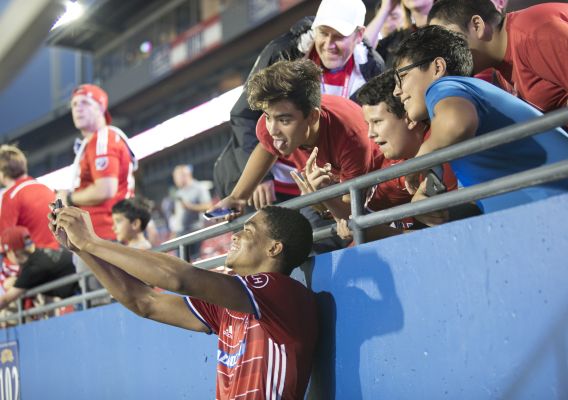 FC Dallas is aiming to return to the playoffs in 2018 and American teenager Reggie Cannon looks poised to be Oscar Pareja's starting right back. ASN's Isaac Heath spoke to the former UCLA product about his goals this season and beyond.
BY Isaac Heath Posted
February 07, 2018
1:00 AM

Over the past few years FC Dallas has solidified itself as the top academy program in MLS having developed the likes of Weston Mckennie and Kellyn Acosta . With a record 21 homegrown players signed, the club has shown an unprecedented commitment to developing and signing players from their academy.

At the age of 14 Reggie Cannon joined FC Dallas where he would grow into one of several standouts that has now passed through the academy and made the professional level.
For Cannon, the opportunity to play against the first team as a young player is the main key to the developmental success FC Dallas Academy players have had.

“You hear of other clubs that maybe sometimes train with the first team, but when I was in their Academy U-16 year I was pairing up 1 v 1 regularly against Fabian Castillo which is the chance of a lifetime at the Academy,” said Cannon.

That experience at the academy level paid off for Cannon, and in December of 2016 he became the 18th homegrown player signed, as the talented right back chose to leave UCLA after a stellar freshman season that saw him start in all 20 matches.

During his first year as a professional Cannon progressed nicely, and now with the departure of defenders Walker Zimmerman, Hernan Grana, and Atiba Harris, the 19 year old is likely to feature for the club in the upcoming campaign.

Over the course of the offseason MLS received criticism for the lack of opportunities the league provided to young American players. In 2017, Tyler Adams, Djordge Mihailovic, Brooks Lennon, and Danny Acosta were the only American teenagers to receive regular minutes. Judging by how things stand at the start of preseason, Cannon will be earning regular minutes to boost those numbers.

Despite the praise he has received, the young defender is remaining grounded knowing nothing is a given.

“Everyone has been telling me you’re the right black, but I just try to ignore it because at the end of the day I have to go out there and prove that I can play against the best teams and players in the league. I have to earn the spot now and that’s my mindset going into the preseason,” said Cannon.

While excited about this season, Cannon seems to possess a healthy amount of patience and wisdom for is age. Prior to his Freshman year at UCLA he had the opportunity to sign on with FC Dallas U18s but instead decided to take a year to develop at the college level.

Cannon flourished at UCLA and grew immensely as a player and clearly came to camp last year a better player.

“I knew that it is hard to make the jump to the pros, and coming from the Academy it is like an ocean. A crazy jump that only a few players are capable of. I think I had to take a stepping stone and I was more prepared for the professional level than I would have been straight from the academy,” explained Cannon.

Although he felt he came in more prepared, the first part of the season last year the right back found himself playing with the Academy more than the first team. While it wasn’t where Cannon wanted to be, he was able to be a part of the U19 group that Won the Dallas Cup Super Group.

In that tournament, the FC Dallas U 19’S beat the likes of Maccabi Haifa F.C, Everton, and Monterrery in route to securing the title and it proved to be a big boost for the young player.

“I’m not going to lie. Coming back from UCLA down to the Academy felt like a step down, but it was a great experience to win Dallas Cup Super Group and I think it really gave me confidence.”

It was a confidence that Coach Oscar Pareja noticed and led to his debut with the first team in June last year against Tulsa in the US Open Cup. A solid performance there led to a second opportunity in the Open Cup where the pacey defender was able to notch an assist in a 3-1 victory against Colorado.

After those two Open Cup performances Cannon remained in the game day 18 the rest of the MLS season, and while he would only see one minute of action, it was clear he had solidified himself as a reliable option with a bright future at the Club.

“Oscar told me after the (Colorado) game it was a really good game and told the press that Reggie’s made a serious consideration for being on the roster. Even though I didn’t play it was a huge confidence booster for me and the team. They knew I could do the job and if needed I would be there for them,” said Cannon.

Though he enjoyed a breakthrough at his club, Cannon did miss out on making the U-20 World Cup roster for the US National team. The U-20 tea made it through their group and the round of 16 before crashing out against a tough Venezuela team in extra time in the quarterfinals. Because of the relative success of the team, and the fact that International tournament chances are rare, it was a missed opportunity for the young player.

“I feel like I would have developed a huge amount if I would have played in the U20 World Cup. The coaches pushed for my spot, but unfortunately the U20 coach hadn’t seen me and I don’t think I was maybe ready for it,” Cannon lamented.

However, even though he would have loved to make the roster, Cannon doesn’t appear to have been discouraged and remains upbeat and hungry.

“I was frustrated not being on the roster for the U-20 World Cup, but I understand why as well. It was their choice and it made me a better player because of it.”

When asked if missing out on the team served as motivation, the right back quickly exclaimed, “Yes, it has helped motivate me big time.”

Between a starting role to claim at the club level, and a chance to grab a roster spot on the 2020 Olympic team, there is plenty of success that motivation can lead Cannon to in the next year and beyond.