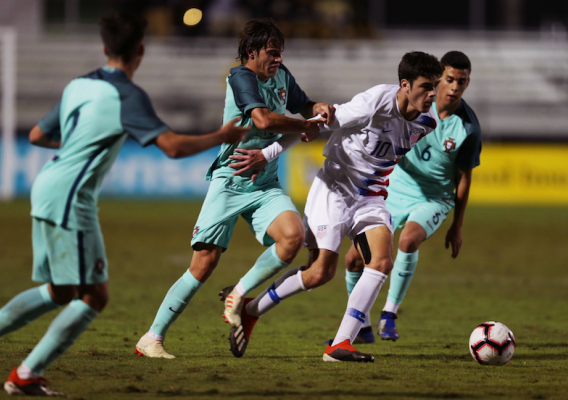 Wicky was only recently hired in March and has had just one camp in charge of the team ahead of this tournament. But overall, the roster should be strong enough to have the U.S. team favored to qualify as one of the four berths from CONCACAF.


Under the current format, there are four groups of four with the top three teams from each group advancing to the Round of 16.

In a previous tournament, Puerto Rico, Guadeloupe, Nicaragua, and the Dominican Republic already advanced the Round of 16.

Starting in the Round of 16, the teams that advance to the semifinals will qualify for the U-17 World Cup.


The US team was drawn into Group F and will open the tournament against Canada on Thursday, May 2 at 6 p.m. ET. The U.S. then faces Barbados on Saturday, May 4 at 4 p.m. ET before finishing group play against Guatemala on Monday, May 6 at 6 p.m. ET.

Should the U.S. team win its group, it will face Guadeloupe on May 9 in the Round of 16.


There are some notable absences on the U.S. team. For one, Wicky’s team will be without one of its most highly touted players in left back George Bello who has been dealing with an injury for the past month. Also, the team is without central defender Mason Judge although it is not clear if he was released by Eintracht Frankfurt or not selected by Wicky. The same can be said of West Ham’s Peter Stroud.

But there is some high-profile attacking talent on this squad which is led by Gio Renya who is listed as unattached but will be heading to Borussia Dortmund. The son of former Untied States national team captain Claudio Reyna, Gio Reyna has been one of the leaders of this team for nearly the entire cycle.

Also, forward Ricardo Pepi also enters this tournament with a lot of momentum as the FC Dallas product has been the team’s best goal scorer this cycle and has carried that form into USL where he plays for the Dallas affiliate North Texas SC. With North Texas, Pepi has scored four goals in two games.

Gianluca Busio is probably the most in-form player at the tournament where he has been seeing significant time with Sporting Kansas City’s first team. While he did not score over the weekend in a loss to San Jose, Busio entered that game having scored in three games in a row.


Here is the winning goal for Seattle over Valencia. US U-17 forward Alfonso Ocampo-Chavez with the assist to Ray Serrano who heads it home. Ocampo-Chavez finished the tournament with 6 goals and an assist. pic.twitter.com/yIaEHddd1c

One of the most talked about stories in American youth soccer this year was how the Seattle Sounders academy won the GA Cup over the weekend with wins over Flamengo, River Plate, West Ham United, and Valencia in the final. All those games were shutouts.

From that GA Cup-winning team two players on this U-17 roster: forward Alfonso Ocampo-Chavez who won the GA Cup Golden Boot with six goals and an assist and Daniel Leyva who won the GA Cup MVP and has already signed a first team contract with Seattle.

But the U-17 also boasts one of the best U.S. youth national team goalkeepers since Zack Steffen in Chicago's Damian Las who will be an important back-stop at this level and could be the difference in the critical knockout stages.