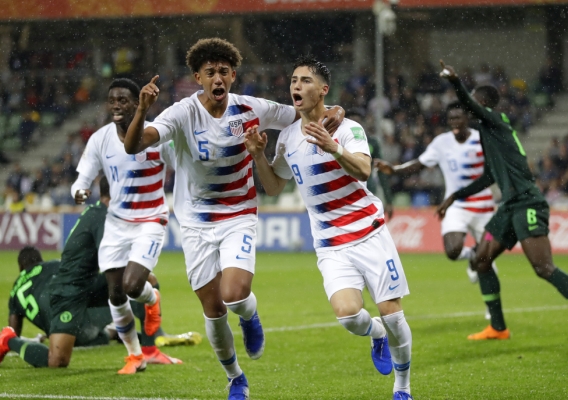 Ramos made just one change from the starting lineup against Ukraine as Sebastian Soto replaced Brandon Servania. That moved pushed Weah from the No. 9 to the wing. Paxton Pomykal then moved centrally from the wing and Soto moved into the No. 9 center forward position.

The U.S. team controlled this game from start to finish and had a significant majority of possession and scoring opportunities against Nigeria.

The United States found the breakthrough in the 18th minute when an Alex Mendez corner kick found a wide-open Sebastian Soto who did not miss with his header. From there, the U.S. team was always on the front foot looking to extend its lead. Alex Mendez also hit the cross bar off a deflected shot.

Sebastian Soto scores his first goal of the tournament and puts ???????? on ???? pic.twitter.com/m2V6ok1MaC

Tim Weah nearly doubled the U.S. advantage but he had a pair of close-range shots that were saved. But 30 second into the second half, the U.S. finally found the second goal when a lovely run from Chris Gloster from inside his own half ended near the penalty box when he was able to send Soto into the box for a close-range shot. He faked Nigerian goalkeeper Olawale Oremade with his first touch and easily finished with his second.


Huge goal for the US U-20!! Soto with his second. Gloster, Pomykal, & Soto having great respective tournaments pic.twitter.com/RvAZA3khkZ

There were a few moments of concern for the U.S. team in the second half. The first was how Chris Richards had to be subbed out of the game for an injury. He was replaced by Mark Mckenzie who has not played much soccer in 2019 due to injuries and looked rusty. McKenzie was initially called for a penalty off a foul but VAR determined that the play was offside.

Here are some thoughts on this game

Stocks rising for Pomykal and Gloster

Gloster has been very solid on both sides of the ball and is just so consistently error free. It must be very comforting for Tab Ramos to not have a concern a the left back position – a position which has plagued U.S. teams for generations.

The run that set up the team’s second goal was just a big-time play and it showed an attacking side for Gloster that matches his defense.

For Pomykal, he looks extremely comfortable with the ball under pressure and is able to routinely hit passes that play his teammates into dangerous attacking positions. He came in with a lot of expectations and has so far lived up to them.

Soto was a big inclusion


Moving Sebastian Soto into the central forward role obviously paid off. Tim Weah has been in a weird club form this year as his position at Celtic was undefined (floating between winger and center forward) and his minutes declined throughout his loan stint. In Soto, Ramos had a more polished central forward who is in form after playing consistently with Hannover’s U-19 team throughout the season.

Soto did well in this game, not just with his finishing, but rather his movement. He moved well into space to get open for the header on the first goal. On the second goal, his timing to make his run off Gloster into the box was first-rate.


Some players still to get going


The good news for the U.S. team is that as well as they played against Nigeria, the team is still capable of a lot more.

Tim Weah missed some key chances and he clearly lacks chemistry with this team. As the tournament progresses, that should only improve. Also with Weah, he is also rusty from limited time with Celtic since February. As he gets into a rhythm, he will only perform better.

The same can also be said for Konrad de la Fuente who has had some interesting moments with the ball, but his final all has been lacking. As one of the youngest players on the team, he should only get sharper and looks as if he has the potential to surface in big moments.

Chris Durkin has been one of the team’s best players through 2019 and his first game against Ukraine was not good. Outside of a few moments, Durkin was significantly improved against Nigeria although he could still be even better.

Mark McKenzie looked very shaky after coming on to replace Chris Richards but that is only due to his lack of minutes in 2019 because of injuries. If he can find a rhythm heading into the knockouts, the U.S. team should be strong shape in the back.

The biggest concern right now, however, is Sergino Dest who has struggled so far in this tournament. Defensively, he needs to be better. But that might also be affecting his offensive game has he hasn’t been as threatening as he could be with his runs forward. If Dest doesn’t show improvement before the knockouts (should the U.S. team qualify), Ramos might feel compelled to go with the young Julian Araujo who is more known for his defensive attributes – while also still being a threat in the attack.

Looking ahead to Qatar


On Thursday, the U.S. team will attempt to book its spot in the knockout stages with a result against Qatar. The U.S. team could still conceivably win the group with a big win over Qatar and a Nigeria win over Ukraine (while also scoring enough to win the goal differential tiebreaker). Of course, if the U.S. team finishes in second, it likely faces tournament-favorites France in the Round of 16.

Ramos might elect to go with some squad rotation, although there should be enough break before the start of the knockouts to make it not as critical.

One concern for Ramos is yellow cards. Chris Durkin, Alex Mendez, Chris Gloster, and Konrad de la Fuente are all carrying a yellow and will be suspended for their next game upon their next yellow card. Those are all key players that perhaps Ramos might consider resting.

With that said, it might make sense to give Edwin Cerrillo his first minutes in Poland in place of Chris Durkin. The same might be the case for Richard Ledezma for Mendez, Uly Llanez for de la Fuente, and Matt Real for Chris Gloster. Also, with the injury status of Chris Richards unclear, Mark McKenzie might be forced into action.

Qatar has lost its first two games at the World Cup but is still somewhat of a tricky opponent where the U.S. team will need to be careful. Ramos will need to make some changes but just how many remains to be seen.

The U.S. team was very good against Nigeria and Ramos won’t want to disrupt that progress.