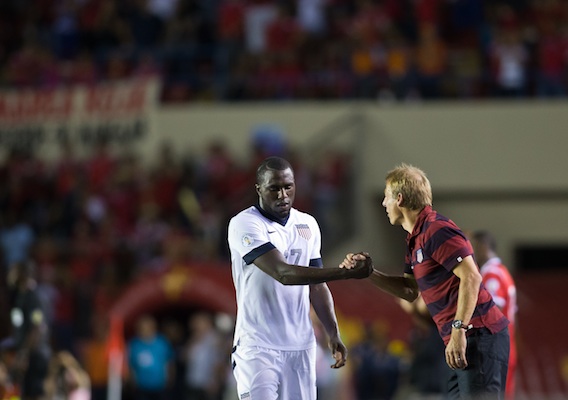 This game could feature the return of Michael Bradley, who has been selected for the match day roster after spending over a month on the sidelines with an ankle injury. Roma is currently tearing up Serie A, and if Bradley is able to work his way back into the lineup, he could be part of a big story for the consistently under-performing team.

Swansea City v. Sunderland
10:00 a.m.
NBC Sports Live Extra
Sunderland is running out of opportunities to jump start its season, and Saturday's test against Swansea could pay dividends. The Swans have a weak defense, and Jozy Altidore could be a menace to finally open his league scoring account. Why watch this game instead of Everton v. Hull City? The action factor: Tim Howard will be lucky to see a few seconds of screen time against the mediocre Tigers, even with the return of Robbie Brady. Altidore, on the other hand, should be the focal point of Sunderland's attack again, and this may just be the game that sees him break through. FC Dallas v. Seattle Sounders
2:00 p.m.
NBC
Time is running out for uncapped U.S. international hopeful George John to make an impression with Jurgen Klinsmann. With Dallas all but out of the playoffs and winless in its last five, John and fellow defender Zach Loyd only have two games left to convince Klinsmann that they should get a call for the January training camp. Also: Will Eddie Johnson and Clint Dempsey be able to return from injuries in time to play?

Aston Villa v. Tottenham
11:00 a.m.
NBCSN
Tottenham is enjoying a hot start to the season, and with Villa's leaky back line, Guzan will need to be big to save points. Tijuana v. Toluca
1:00 p.m.
Univision
The American contingent is back in action against Toluca, with Herculez Gomez needing to get on a hot streak to stay in contention with Aron Johannsson on the U.S. national team. Joe Corona also finds himself in an increasingly dire situation with the Yanks, as Mix Diskerud is taking advantage of his opportunities and impressing Klinsmann. Both players need to put together a string of strong performances—sooner rather than later. What will you be watching this weekend? Tell us in the Comments below.