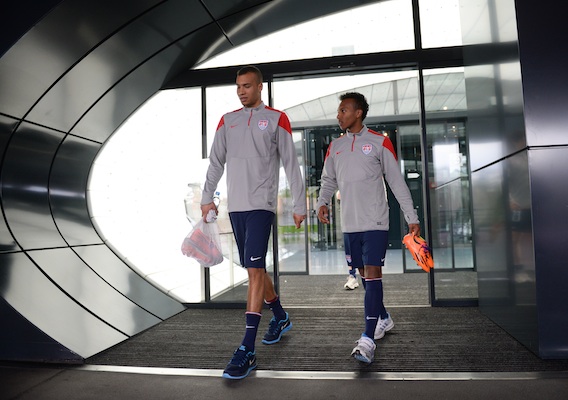 Young, talented, and on the fringes of the U.S. national team, Terrence Boyd and John Brooks delivered the kind of performances that are certain to catch Jurgen Klinsmann's eye.
BY Brian Sciaretta Posted
April 28, 2014
10:00 AM
IT WAS AN EVENTFUL weekend in Europe as a bunch of players who are on the bubble for the World Cup roster made impressive moves to build their cases. John Anthony Brooks, Terrence Boyd, and Tim Ream all excelled in positions of need for the U.S. national team. Elsewhere, Joe Gyau and Andrew Wooten made cases to enhance their respective resumes for the 2018 cycle. It was not all positive for the U.S. national team, however, especially at the fullback position. Timmy Chandler returned from injury but looked uneven in his first game back and was subbed out at the half. Also, DaMarcus Beasley, still nursing a hamstring strain, did not play over the weekend.

Joe Gyau’s young career has been all about perseverance at Hoffenheim. He has fought through playing for the club’s second team and on a difficult loan to St. Pauli. Now 21, Gyau’s hard work has paid off and on Saturday he finally made his Bundesliga debut, coming on as a 69th minute substitute in Hoffenheim’s scoreless draw against Eintracht Frankfurt. The United States needs more young wing players and Gyau’s emergence could be a welcome addition to the 2018 World Cup cycle.

Tim Ream has emerged as one of the most versatile defenders in the English Championship, playing well every position in the backline as well as in defensive midfield. He has done everything asked of him and it is likely that he will attract interest from other clubs this summer. On Saturday, Ream played left back again for Bolton in a 3-1 win over Sheffield Wednesday. He had the most touches (69) of any Bolton player, completed 78% of his passes, and was effective in getting forward into the attack. His strong showing this season serves as a reminder that 1) we should never write off a player after one bad year and 2) it often takes players a bit of time to settle into European play.

The forward position has become deeper and more competitive for the U.S national team in the first months of 2014. Chris Wondowlowski has made the most of his opportunities and Juan Agudelo has shown glimpses of his quality while on loan in Utrecht. Terrence Boyd is also coming on very strong. He has scored four goals in his last two matches, raising his total to 18 in all competitions for Rapid Vienna this season. Will it be enough to earn a trip to Brazil? It's tough to say, but an invitation to May camp is now looking likely. And if he can take advantage of that opportunity and show well in training, perhaps Boyd can become the surprise pick for the U.S. World Cup squad. There always seem to be a few of those, so why not Boyd?

Andrew Wooten, on loan from Kaiserslautern most of the past two seasons, has always been a bit of a mystery. Sometimes he struggles for playing time but when he does play, he seems to do well. Take Saturday's match: FSV Frankfurt desperately needed a win to avoid relegation out of the 2.Bundesliga, and Wooten responded by scoring two goals en route to an important 3-1 win over last place Cottbus. Early in the first half, his a dazzling run up the middle of the field nearly resulted in a penalty (at 0:19 of the video below). He scored the game’s opening goal in the 32nd minute on a nice move into the box (at 0:52 of the video) and then again from the penalty spot in the 34th (at 1:52) before being subbed out in the 71st minute. Maybe next season he can finally find a place to start every single weekend.

While Wooten and Boyd each had impressive two-goal games, Brooks was an easy choice for American player of the week. Brooks scored Hertha Berlin’s opening goal and helped preserve a shutout in a 2-0 win over Eintracht Braunschweig—but that's not the entire story.
Hertha 1-0 Braunschweig (Goal Brooks) 26-04-2014 by raghey This season has been an interesting ride for Brooks. He has been subbed out of games in the first half multiple times because of uneven play. And earlier this month he missed a game because he got a full-back tattoo between matches and it did not heal in time. The 21-year-old Brooks needed to bounce back from some poor showings and poor decisions, and he did just that. His game against Braunschweig was one of his best of the season and Bundesliga Fanatic named him to its Bundesliga Team of the Week. Brooks still faces an uphill climb to make the World Cup team, but it is within reach. His strong end to the season likely means he will make Jurgen Klinsmann's provisional 30-man roster and he should arrive at camp with the momentum at his back. Brian Sciaretta is an American Soccer Now columnist and an ASN 100 panelist. Follow him on Twitter.