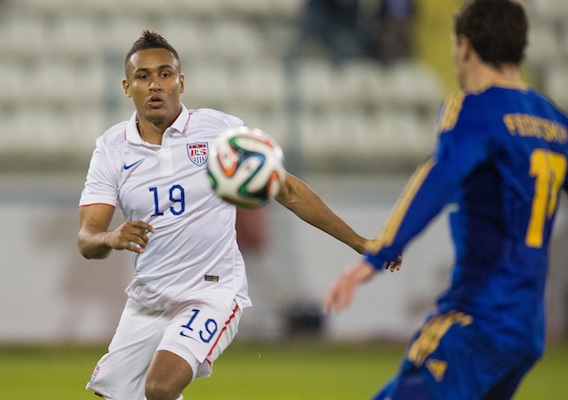 In a matter of days U.S. head coach Jurgen Klinsmann will release his provisional 30-man roster for the 2014 World Cup, and two American strikers delivered attention-worthy performances over the weekend.
BY Brian Sciaretta Posted
May 05, 2014
9:45 AM
ONE THING IS FOR CERTAIN heading into World Cup camp: Jurgen Klinsmann has options at the forward position. Jozy Altidore and Eddie Johnson may not be in top form, but there are others who are riding a wave of momentum as the U.S. coach makes his roster decisions. Juan Agudelo played his best game of the year on Saturday and Terrence Boyd maintained the best streak of his career. But that wasn’t all. Birmingham City was part of one of the most dramatic games in England this season and Geoff Cameron is ending his strong season on a high-note. Here are the best performances of the weekend from Americans abroad.

Last month, a Czech Republic publication named Bosnian-born American winger Nermin Crnkic the fastest player in the Czech Liga. He has been a valuable player for Znojomo this season and has been a consistent starter since leaving the USL’s Michigan Bucks to pursue a career in Europe. On Saturday, he scored an important goal in Znojmo’s 4-1 win over Liberec. His 58th-minute strike off a poor Liberec clearance equalized the game and gave Znojmo the momentum en route to its rout. The win gave Znojmo an important three points to keep the club clear of the relegation zone.

Geoff Cameron has been the best American defender all season long so it was only fitting to see him put in another quality outing in Stoke City's second-to-last game of the 2013-14 campaign. In a solid 4-1 win that sent Fulham down to the English second tier, Cameron played a very steady game at right back. He completed 87% of his passes with a total of 76 touches and, as usual, he was dominant in the air, winning 67% of his areal challenges. With Ghana, Portugal, and Germany awaiting, it's reassuring to see at least a few American defenders playing well heading into the start of World Cup camp.

In one of the most dramatic games in England this season, Birmingham City survived relegation thanks to a stoppage-time equalizer from Paul Caddis in the last game of the season. Needing a result to avoid dropping to League One, the Blues were trailing 2-0 in the 78th minute and clawed back to stay in the Championship. Spector played 90 minutes at right back and starred for the Blues, delivering a solid 74% pass accuracy and totaling 70 touches from the back line. This past season proved to be challenging for both player and club, but Birmingham City avoided disaster and Spector ended on a high note after a series of injuries and setbacks.

Jurgen Klinsmann has continuously emphasized that club form is crucial heading into the World Cup. In fact, he has stated that the "door remains open until the very last day” for players to make their cases to make the roster. Terrence Boyd has always been a bubble player for the U.S. national team and a month ago it may have seemed like he was not going to make the preliminary World Cup roster. Times have changed quickly. Boyd is currently playing the best soccer of his professional career and his goal Sunday in Rapid Vienna’s 2-0 win over Innsbruck was his fifth goal in the last three games and his 19th on the season in all competitions. Boyd might still be waiting to score his first for the U.S. national team but his recent form makes him impossible to ignore.

In a game where he absolutely had to stand tall in order to keep both his World Cup and British work permit hopes alive, Juan Agudelo delivered with his best performance since joining Utrecht. He was solid in his hold-up play, his passing was precise and effective, and his positioning put him dangerous positions. In the 40th minute the 21-year-old striker assisted on Steve De Ridder’s goal to give Utrecht a 1-0 lead over Vitesse.
And then Agudelo scored the game winner in the 78th minute.
The upcoming weeks will no doubt be nerve-wracking for Agudelo as he waits to see if he will be granted a British work permit to finally join Stoke City and also to see if he will make Jurgen Klinsmann’s 30-man preliminary World Cup roster. Brian Sciaretta is an American Soccer Now columnist and an ASN 100 panelist. Follow him on Twitter.