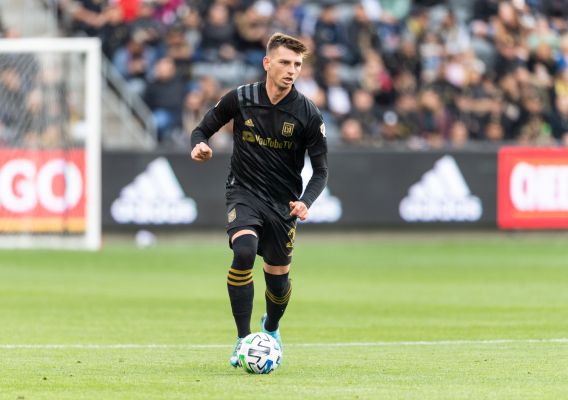 Blackmon growing in importance in 2020 on a powerful LAFC team

Tristan Blackmon is a name not many American fans are talking about but he is taking a bigger role these days on the backline of a powerful LAFC team that aims to be one of the regions best clubs in the years ahead. ASN's Brian Sciaretta spoke with the LAFC's only starting American player at the moment about his role and goals for the future.
BY Brian Sciaretta Posted
April 08, 2020
12:00 AM

COMING INTO the 2020 MLS season, there were a lot of American players poised to have pivotal years and many were well known. Could Paxton Pomykal continue to boost the FC Dallas midfield? Could Mark McKenzie move from a prospect into a an anchor of Philadelphia’s backline? Would Jordan Morris move from an all-star to an elite player?

At Los Angeles FC, one of the more interesting questions was surfacing at perhaps the most talented team in the league. Could the young Tristan Blackmon, who has only a little more than 2,000 minutes of experience in the league, help cement the team’s backline after the departure of U.S. national team defender Walker Zimmerman?

It is a lot of pressure  to put on Blackmon, 23, who came into the league as a right back but might eventually emerge as a central defense option in place of Zimmerman. LAFC has quickly become one of the most high-profile teams in the league and it spends a lot of money to earn that distinction. Carlos Vela is the league’s best offensive player while Diego Rossi and Brian Rodriguez are two of the most exciting young imports to the league.

As to whether or not LAFC will chase silverware will likely come down to the performance of the backline.

In the CONCACAF Champions League opener against Leon, Blackmon was responsible for the opening goal in a 2-0 loss on the road. But then he was also a starter in the thrilling 3-0 clean sheet win at home to advance in the series. In the MLS opener he went the distance in a 1-0 clean sheet win over Inter Miami and then again in a 3-3 draw against Philadelphia.

“We went down to Leon and the result didn't go our way in the first leg,” Blackmon told ASN from California. “We had to take a real look at ourselves as a team and individually and figure out what we could do to bounce back in the second leg here in LA. And that turned out to be an incredible match. All pistons were firing and everybody felt really good about the match. And that all coincided with the start of the MLS season.”

“Personally, I was feeling pretty good [before the shutdown]” he added. “Obviously after the first game. I had to recalibrate and look at things a little bit harder. Especially at the start of the year, trying to get your legs back under you. I think I took a hard look at myself. And I think in the second leg I really stepped it up again. And I reminded myself again of what I have to continue doing and the path I have to push myself - especially the role that I'm taking on this season.”

Despite the few mistakes he has made, LAFC is betting that Blackmon will adjust quickly and be part of a club that has huge ambitions that go beyond MLS. After the best regular season in the history of the league in 2019, LAFC wants to win silverware – including an MLS Cup and to become the league’s first team to win the CONCACAF Champions League. The win over Leon certainly showed that it has the potential to do just that.

The team’s offense, however, can only take them so far. Blackmon came into the league via the draft in 2018 when he was taken by LAFC with the third overall pick. That came after a standout career at the University of the Pacific where he was one of the nation’s best right back in the NCAA. But following a pair of loans to Phoenix Rising in the USL (the second was necessary as part of a recovery from injury), Blackmon began to play central defense for the first time in his career. When he returned to LAFC, injuries saw him play that position in MLS.

“I know the job that I have to do in each of the positions. So I wouldn't say one is definitely more comfortable than the other but I think I am comfortable playing in either of those roles. I think especially this year with Walker leaving and obviously we have Dejan Jakovic, who stepped up in the beginning and has done extremely well. We have guys that are ready to step in and fill that void that was kind of left after Walker was traded to Nashville. If that's a space for me to fill when called upon, then I'm ready to do that.”

Blackmon acknowledges that coming out of college via the draft is more unconventional in this era of MLS but insists that his coaching there taught him valuable lessons and he insists he wouldn’t take it back. It was at Pacific where he was part of the program’s rebirth and rebuild while also converting from a forward and a winger to right back.

Coming into LAFC from the collegiate ranks is a huge step and there is pressure to win with the team’s budget, constant sellouts, and media presence in one of the biggest television markets in the country.

“Coming from L.A., that's such a big market for sports,” Blackmon said. “I think we have an obligation to be the best. It's just this unsaid thing. And we have the players, we have the supporters, the owners to back all of us players every single time we step on the pitch. This club is very different from a lot of clubs. It's hard for me to say that because I haven't been exposed to other clubs in the league on a personal level. But I think our club is way different…I think we're the most unique club in the league, and I think when we step on the field, we show we're different in the way that we play compared to everybody else.”

Whenever the league resumes play, Blackmon hopes to pick up where he left off and compete for silverware. While Blackmon doesn’t receive too much media attention among national soccer journalists due to having never played for the U.S. national team or youth national teams, Blackmon is the only American starter on arguably one of the best teams in the region through the first four games of 2020.

With that, he is happy right now to be surrounded by talent and playing on a team capable of winning impressive silverware.

“And we set a high standard,” Blackmon said of his club. “We have these reminders that we set the tone last year and we do not want to fall below that because we can be even better than we were last year. We had some results that we shouldn't we shouldn't have let slip. So even looking back at last year, yeah, we had a good year. But we think we could be better. I think that really set the tone for us in the offseason to come back striving for more this year, especially the Champions League. And yeah, I just wanted to play every game possible and bring back as many trophies as we can.”