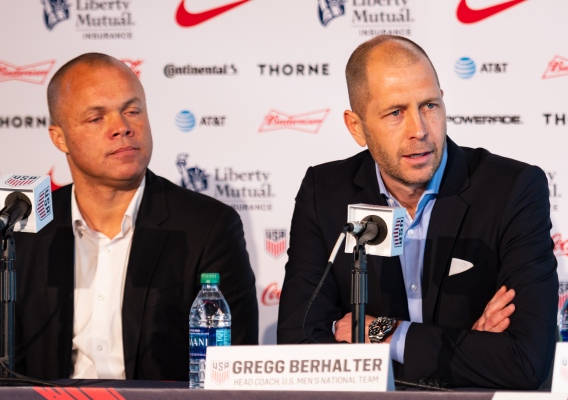 Stewart, a teammate of Berhalter at the 2002 World Cup, told the press that he only started his position on August 1 while he finished his job with the Philadelphia Union. Prior to that, the federation was involved in a wide range of work that included February’s presidential election in Carlos Cordeiro, the 2026 World Cup bid, and naming a new General manager in Earnie Stewart.

Only on August 1 did the coaching search begin and the first step was creating a profile of what they wanted the new coach to look like. Numerous criteria was created and in the end, 33 names were whittled down to one and Berhalter checked the most boxes.

The big quote from Berhalter came when he was asked specifically about the team’s style of play. The New Jersey native said that his plan was to have the team have a plan that centers around disrupting the opponents and pressing.

“The idea is that it's a fluid style that the players are intent on breaking lines, playing through the opponent and creating goal-scoring opportunities,” he added. “At times we can do a better job changing the tempo instead of playing at such a high rhythm all of the time. I think mixing that rhythm is going to be very important, especially at the international level, and especially given the climates we are going to be playing in. But we want to see ball circulation, breaking lines, and creating goal scoring opportunities. That should be the DNA of this team.”

Berhalter said that he will hit the ground running and this week he will be reaching out to many of the domestic-based players along with attending MLS Cup this Saturday. Next week, Berhalter will return to Europe and meet face to face with many of the players based overseas.

Following a collegiate career at the University of North Carolina, Berhalter embarked on a long career abroad where he even served as the captain of 1860 Munich and Crystal Palace. It wasn’t 2009 when he returned to the United States to play domestically with the LA Galaxy.

Following his playing career he coached at Hammarby and then the Columbus Crew. During his time with Columbus, he led the team into the playoffs three out of four seasons despite the team’s meager budget.

Berhalter admitted that coaching a national team is different than coaching at the club level. The amount of time he has with his players is a fraction compared with the club levels and international dates are sporadic. In fact, he will only have one camp in March with his full squad before the end of the European season.

In addressing these limitations of the job, Berhalter said that it is key to maintain communication with the players outside of camps to be more prepared for when the team gets together.

“How can we do more outside of camp?” Berhalter asked. “What communication can we give to players that can prepare them for the learning that’s going to take place in camp? [We can] setting the stage in January for team expectations, team culture and style of play. We can get a head start by working with this group in an intensive period in January and then integrate the European players in the March camp...Talking about supplemental materials, talking about video libraries and having webinars with players. As much as we can to push the envelope on this we need to try to do.”

The U.S. national team will assemble for the first time under Berhalter next month for the start of January camp. The team will then face Panama on January 27 at State Farm Stadium in Glendale, Arizona and Costa Rica on February 2 at Avaya Stadium in San Jose, Calif.