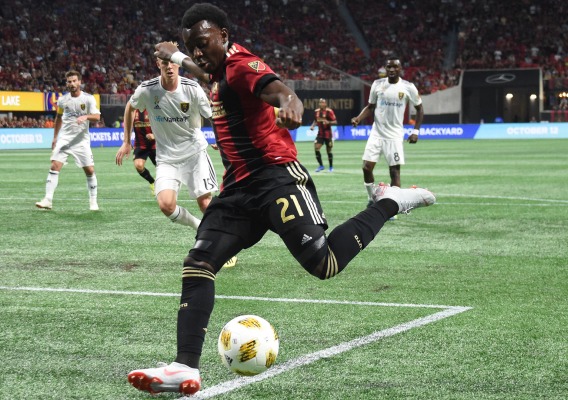 For those wanting to see top American prospects get onto the field, this was a good weekend for you with George Bello's first start and potential U.S. U-20 captain Mark McKenzie part of big win for Philly. But several top teams were also terrible this weekend.
BY Brian Sciaretta Posted
September 24, 2018
9:00 AM
THE PAST WEEKEND in MLS was good and bad. We saw the good in Atlanta and the Red Bulls but officiating once again became a major story. Seattle and Sporting Kansas City did not play like the top teams they should be and NYCFC continues to spiral downward.

Here is what ASN noticed this weekend.

Saturday was an exciting moment for one of the top American youth prospects as George Bello, 16, earned the start for Atlanta United at home against Real Salt Lake. Bello is the starting left back for the United States U-17 national team and is one of the best American young talents at that position in a very long time.

Bello left the game with Atlanta up 2-0 in the 73rd minute. Overall, it was a very good debut with the Ghana-born, Georgia-raised teenager completing over 83% of his passes and did a very good job of shutting down RSL’s Jefferson Savarino, a Venezuelan international. Defensively, he controlled his side of the field.

The game proved that Bello certainly is a player with a lot of potential. Don’t be surprised if in 2019 Bello does what Josh Sargent did in 2017 and play in both the U-17 and U-20 World Cups in one year. The current left back U-20 pool is Sam Vines, Matthew Real, and Chris Gloster. Don’t be surprised if Bello overtakes them.

United States national team centerback Tim Parker had a rough weekend the week before against DC United. On Saturday, however, the Long Island native was great against Toronto FC in a 2-0 win. Likewise, his partner Aaron Long also performed well in his second game since his first USMNT callup.

Walker Zimmerman didn’t just help LAFC keep a cleansheet against San Jose on Saturday, but he also scored both goals in a 2-0 win. The Georgia native showcased his first-rate aerial ability as he fights for a spot on the U.S. team.

Auston Trusty could be pushing for his first U.S. national team call-up soon and is a front-runner to be a U-23 starter and he was named to the league’s team of the week for his performance for Philadelphia in a 2-0 win over Sporting Kansas City. Likewise, his partner on the backline in Mark McKenzie, also helped his cause and could be the U.S. U-20 captain.


The biggest game of the MLS regular season is next week when the New York Red Bulls will host Atlanta United. It will pit the top two teams in the league against each other and if the Red Bulls win, they will close to within a point of Atlanta for the Supporters Shield.

But the matchup will lose some of its luster because Red Bull forward, Bradley Wright-Phillips, will be suspended after acquiring yellow card in a 2-0 win over Toronto on Saturday. The report is that English-born Wright-Phillips used the F-bomb when describing being held on a player. As it turns out on replay, Wright-Phillips was held on the play.

It is understandable for referees these days to issue yellow cards for aggressive behavior to keep a game from getting under control. But Wright-Phillips was not acting in a manor inappropriate towards an official. There is a line towards players being overly aggressive towards an official, and just normal banter during a game. It did not appear as if Bradley Wright-Phillips came close to crossing that line.

Now the league’s biggest game of the season will be missing one of the greatest players the league has ever had in its history – all because of an unfortunate call. It’s too bad.


The Philadelphia Union are one of the most surprising teams in MLS an the U.S. Open Cup this year. Jim Curtin’s teams are just finding different ways to win all year.

Before the season, if you were to predict that the Philadelphia Union would be in fifth place in late September, with a chance of closing in on third place, you would have been given long odds. If you were to say that Philadelphia would be doing that without significant contribution from David Accam or CJ Sapong, no one would have believed you. Or that, on top of all of the above, it would play most of the season with two American teenage central defenders, it would have seemed impossible.

But look at the week Philadelphia had. In midweek, it snapped Seattle’s nine game winning streak with a 1-0 win on the road in Seattle. Then on Sunday, it flew cross-country back home to beat Western Conference contenders Sporting Kansas City 2-0. Two clean sheet wins on opposite sides of the country over two of the league’s hottest teams.

Jim Curin is just getting it done right now and you have to like their chances midweek in Houston for the Open Cup final. After seemingly have been on the hot seat earlier in the year, Curtin deserves to be in the mix for the MLS Coach of the Year.

Galaxy back in the race?


The LA Galaxy are hard to figure out. The team has fluctuated between decent and dumpster fire all year. More recently, it has been the latter and that is why the team has an interim manager at the moment.

The Galaxy were sharp on Sunday in a convincing 3-0 win over Seattle. Zlatan Ibrahimovic has been brilliant since joining the Galaxy and he is the quality of player that can put a team on his back and carry them far. From a U.S. national team perspective, Sebastian Lletget looks sharp whenever healthy - which he was on Sunday.

The seventh-place Galaxy now trail sixth-place Seattle by three points – although Seattle has one game in hand – for the final playoff spot in the Western Conference.

The good news for Galaxy is not only that it has Zlatan, but that three of its final four games of the season are against teams outside of the playoffs (home vs. Vancouver, away at Sporting KC, away vs. Minnesota, and home vs. Houston). The bad news is that Seattle has five games remaining and all of its opponents are against teams outside of the playoffs.

The more likely path into the playoffs for the Galaxy is to pass fifth place Real Salt Lake which it trails by four points. RSL has four games remaining and has a more challenging schedule than Seattle or the Galaxy. It will play Portland twice (home and away) as well as Sporting Kansas City on the road and New England at home.