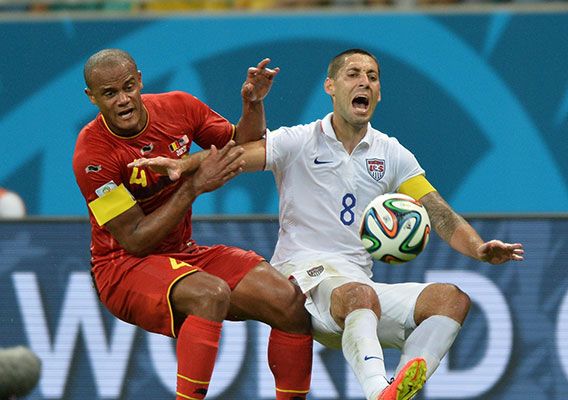 The U.S. fought valiantly for 120 minutes but ultimately fell to a superior opponent, 2-1. Belgium will now go on to face Argentina in the quarterfinals, and the Americans will head home.
ASN Slideshow

BY John Godfrey Posted
July 01, 2014
6:50 PM
AGAINST GHANA AND PORTUGAL, the United States men's soccer team played on its front foot and challenged its opponents. Against Germany and Belgium, Jurgen Klinsmann's men could not manage to do so. Belgium beat the U.S. in extra time, 2-1, a deserved result in a match it thoroughly dominated. American goalkeeper Tim Howard kept his team in the contest with a breathtaking 16-save performance, but not even he could keep a relentless Belgian squad from scoring toward the end of the tense clash. The final shots on goal tally: 18 for Belgium, five for the Americans. It was that kind of game. Belgium got off to a strong start and never relented. dictated play throughout the first half. While it never came close to beating Tim Howard in the first interval, the Europeans did create a few decent chances—mostly off U.S. turnovers and quick exchanges. In fact, the Yanks nearly gave up a goal 40 seconds into the match. Before many had settled into their seats in Arena Fonte Nova in Salvador, Divock Origi broke in on goal from the right flank and unleashed a low, right-footed shot. Tim Howard pushed it aside, but the tone had been set for the first half: Belgium was ready to play. The Americans seemed less so. Michael Bradley continued to struggle, looking uncomfortable on the ball and failing to complete many passes. A Bradley giveaway in the 18th minute forced Geoff Cameron to bring down Dries Mertens on the counter, drawing a yellow card. In the 20th minute, some quick combination play between Bradley and Dempsey led to the U.S.' first chance on goal. It wasn't a pretty sequence—Bradley seemed to stumble on the ball—and Dempsey's off-balance left-footed shot was caught easily by Belgian keeper Thibaut Courtois. At the half-hour mark, Fabian Johnson pulled up lame and had to be taken off. DeAndre Yedlin came in for him, and immediately showed promise down the right wing. His blistering pace gave Belgium problems, but none of his runs created a clear chance on goal. Through the first 45 minutes, Belgium attempted 18 crosses, but only managed to complete one of them. As the referee whistled for half time, the Yanks seemed lucky to be tied. The best chance of the game came in the 54th minute, when Thomas Vertonghen sent in a cross from the left flank. The ball evaded Gonzalez, skipped past Matt Besler, and then found its way to Origi on the far post—but he couldn't put his foot to it. About a minute later Origi headed a cross past Howard and off the crossbar. Once again on the front foot, Belgian seemed poised to score. And yet, the Americans held their opponents at bay—via missed opportunities, big saves from Howard, and desperate defending. At the 72-minute mark Belgium thoroughly controlled the game, but not the scoreboard. Looking to mix thinks up, Klinsmann took off a toothless Graham Zusi and brought in Chris Wondolowski. The San Jose Earthquakes forward played up top, Dempsey dropped back to a withdrawn striker role, and the U.S. immediately looked more threatening. But not in a sustained manner. Belgium made adjustments, and continued to unload shot after shot on the U.S. goal. Fortunately for the Americans, Howard put on a goalkeeping clinic. He jumped, dove, and sprawled to keep the ball out of his goal, anticipating well and positioning himself perfectly. Howard truly kept his team in the match. Despite Belgian's dominance, the U.S. had a golden chance in stoppage time. Positioned in the center of the Belgian penalty area, Jermaine Jones won a 50-50 ball, and nodded it to Wondolowski, who was alone on the right side of goal. Wondolowski could have ended the game in stoppage time, but he rushed his shot and sent it wide and high. After three minutes of stoppage time, the referee whistled the end of regulation: U.S. 0, Belgian 0. Belgium changed that scoreline two minutes into extra time. It started with substitute Romelu Lukaku, who stampeded down the right flank ahead of the U.S. defense. He passed back to Kevin De Bruyne, who took his time and sent in a right-footed shot into the far corner past Howard. The U.S. looked deflated. And then, 12 minutes later, Lukaku put the Belgians ahead by two. The second strike came on a counter. After a failed U.S. attempt on goal, Belgium took possession and outhustled the retreating American defenders. De Bruyne released Lukauku into space, he beat Besler to ball, and lifted a left-footed laser past Howard to give his team a two-goal lead. But then things got interesting. Julian Green, a 19-year-old attacker who hadn't played in the tournament until this match, got on the end of a lofted Michael Bradley pass in the 107th minute and volleyed it into the back of the Belgium goal, cutting the lead in half. The Yanks were not going down without a fight. But the Americans eventually ran out of gas, and time. A trick play on a late free kick almost led to a goal, but Dempsey couldn't control the ball in front of goal and the chance flew by the wayside. And then Belgium ran out the clock expertly, wasting time and forcing the weary Americans to burn energy and regain possession. In the end, the U.S. fell to a superior, more aggressive opponent. Klinsmann could not find a way to make his team play attacking, beautiful soccer, and a team that captivated America will now watch the rest of the action on a TV screen. What did you think of the match, and the United States' run in the 2014 World Cup? Tell us below. John Godfrey is the founder and editor in chief of American Soccer Now.