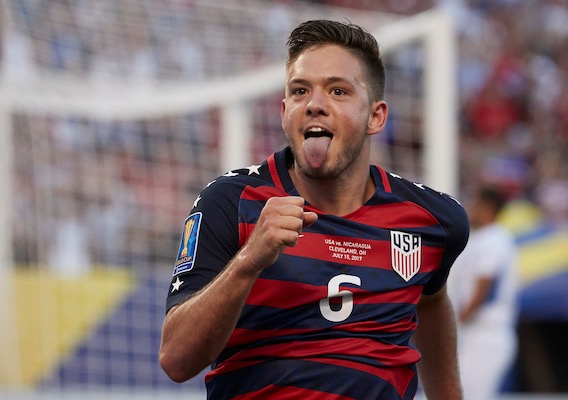 The Yanks missed two penalties and couldn't impose their will on Nicaragua until late in the second half, but the standings don't lie: The U.S. won Group B, and here are Brian Sciaretta's player ratings.
BY Brian Sciaretta Posted
July 15, 2017
7:00 PM

THE U.S. MEN'S NATIONAL TEAM was far from perfect in Saturday’s 3-0 win over Nicaragua but it was also much improved from its disappointing win over Martinique on Wednesday. The Americans avoided glaring defensive mistakes and created numerous opportunities. In the end, the team managed to get the three-goal result it needed to win the group but abysmal penalty taking made this game much harder than it had to be.

Bruce Arena changed the entire starting lineup from Wednesday and that was a smart move. This team was more focused and didn’t get frustrated after blowing chances or missing penalties.

Bill Hamid: The D.C. United backstop did not have much to do but when called into action he responded. His best moment came in the 74th minute with an outstretched save. Rating: 6

Jorge Villafana: The Santos Laguna left back was mostly invisible. He wasn’t tested much defensively and did not play a part in anything dangerous. Rating: 5.5

Matt Besler: The veteran brought experience to the backline and played well. His distribution out of the back helped generate several dangerous sequences. His passing overall was key. Rating: 7

Matt Miazga: The New Jersey native was the hero, scoring a late goal to gave the U.S. the Group B title. It was his first international goal and it came at a big time. Aside from his goal-scoring heroics, the Chelsea player was barely tested. Rating: 6.5

Graham Zusi: A decent game from the Orlando native who had a few nice moments pushing forward. In the first half he made a bold run through several defenders only to shoot a point blank opportunity straight at the keeper. His free kick set up Miazga for the critical third goal—one of the best plays of the game. Rating: 6.5

Dax McCarty: The Chicago Fire midfielder had a pretty good game. His passing was good, which is typical of him. But he was stripped of possession too many times. Overall he was good keeping plays alive and finding holes in the defense. Rating: 5.5

Alejandro Bedoya: The team’s longest-tenured player had his best game for the U.S. in a long time. He was a valuable playmaker, fed Kelyn Rowe on his goal, and helped draw the second penalty. Defensively, he was solid. It was a complete performance. Rating: 7.5

Kelyn Rowe: The New England Revolution attacker continued to enjoy a strong tournament and was very active in the first half. In the second half he scored a very nice goal that turned out to be more important than it needed to be. It was odd he was taken out so early. Rating: 7

Joe Corona: The Club Tijuana mainstay did well to score the opening goal but aside from some tidy work in that sequence he did not hit many decisive passes in his playmaking role.  His second-half penalty was poor. Rating: 6

Chris Pontius: The Philadelphia Union attacker is probably on the list of players to be replaced before the knockout games. He didn’t really do much to chance his status but he had very nice pass to Dom Dwyer to draw the first penalty. Rating: 5.5

Dom Dwyer: The Sporting Kansas City forward never really got going. He had a chance to boost the U.S.' chances but botched a penalty. Rating: 5

Jordan Morris: The Seattle native brought speed to the game and was dangerous at times. He was an upgrade over Dwyer. Rating: 5.5

Paul Arriola: The Tijuana winger came on for Rowe and while he was lively at times he did play up to Rowe’s level. Rating: 5.5

Juan Agudelo: The New England forward did not add much to the game. Rating: 5

Bruce Arena: Arena changed every player from Wednesday’s disappointing performance and this was much better. A 3-0 victory is not a bad result considering the two missed penalties. The team created chances and should have scored a lot more butall told  it was a more focused effort devoid of defensive mistakes. One negative, however, is that the substitutes offered little and the decision to remove Rowe was questionable. Rating: 6