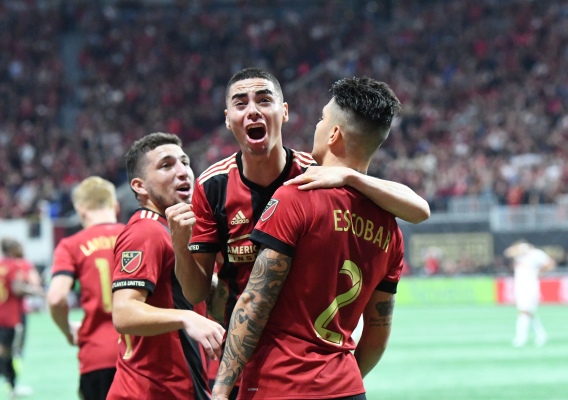 The Eastern Conference finals was set to be an epic matchup but in the end, only Atlanta showed up. Meanwhile, Sporting Kanas City will return home even after playing to a hard-fought draw with Portland.
BY Brian Sciaretta Posted
November 25, 2018
9:35 PM
ATLANTA UNITED can start setting up for hosting MLS Cup on December 8 after a convincing win over the Red Bulls and Sporting Kansas look to be the favorites out of the west after playing to a scoreless draw in Portland.

The 3-0 win by Atlanta was commanding and it is hard to see the Red Bulls even making this interesting on Thursday. The turning point was when Bradley Wright-Phillips had a goal called back in the 53rd minute after it was decided that Alex Muyl screened Brad Guzan from an off-side position. Muyl was offside but it is hard to see Guzan making the save even without Muyl there.

Meanwhile, Sporting Kansas City’s old backline has been the cornerstone of its success for most of the past decade. Seth Sinovic, Graham Zusi, Matt Besler, Ike Opara and goalkeeper Tim Melia kept Portland off the board in a hostile environment. In the friendly confines at home this week, Sporting should be favorites to advance.

Here are some thoughts on the games.


The Red Bulls were dealt a tough low with the loss of Kemar Lawrence, who was ruled out due to a training injury. Lawrence is the best left back in the league and when New York defeated Atlanta in September, the Jamaican was the best player on the field. Connor Lade took the place of Lawrence and Atlanta had a direct game plan to go after his side of the field. It worked.

But the biggest takeaway from this game is why the Red Bulls did not press Atlanta as aggressively as they did in the two regular seasons. It was a big part of why they were successful. In this game, the Red Bulls sat back and tried to choke off service to Josef Martinez up the middle.

But Atlanta is so good that eventually they will find a way to get the ball into the Venezuelan. On the opening goal, Jeff Larentowicz had tons of space and time to make a perfect pass to Martinez over Tim Parker. These are the kind of passes that Atlanta never really had in their two previous meetings.

Red Bulls head coach Chris Armas really appeared to outsmart himself in this away leg. Instead he should have continued to roll with what made the Red Bulls the league’s best team in the regular season.


It was not expected to be a calm game when Portland hosted Sporting Kansas City and the first half was frantic and wild. In the second half, Portland had a goal called back to the protests of the home crowd.

But it was a very mature performance from a Sporting Kanas City team that is probably making one of its lasts runs with a backline that has had a lot of success over most of this decade. Changes will eventually need to be made, but this group is on the verge of returning to MLS Cup in large part of its savviness to win games like this.

It was this level of maturity and disciplined game plan that was missing from the Red Bulls on Sunday. Both teams are talented but Sporting Kansas City respected its game plan and was far calmer on the road in a big game. That is why one is returning home with a chance to advance and the other is not.