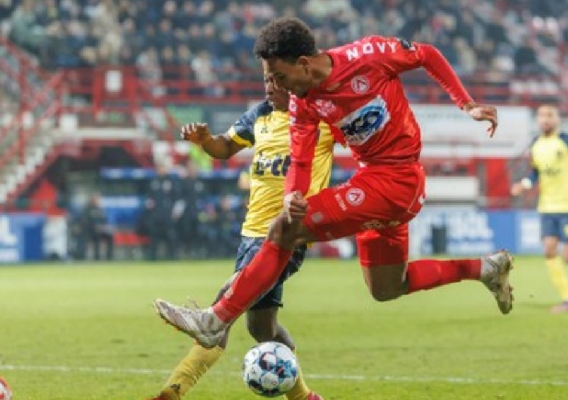 At Kortrijk, Reynolds finds a place to develop and grow

The early stages of Bryan Reynold's career have seen him moved from one environment to another - quickly and where he was often rushed. At FC Dallas, he switched to the right back position and had to adapt quickly before getting sold to Italy. Then at Roma, he didn’t have much time to learn before Jose Mourinho arrived. Now on loan at Kortrijk, Reynolds is in a challenging environment but also one where he has needed time to learn and develop.

THE JUMP TO EUROPE is never an easy thing for young American players. The move involves getting used to new cultures, languages, and styles of play. Sometimes the stigma of being an American lingers and players are viewed skeptically.

Bryan Reynolds, 20, has now been in Europe for over year but he is still on the path of adjusting. At the start of 2021, he completed a move from FC Dallas to AS Roma. While many young Americans have made the move to Europe from various MLS clubs, Reynolds was different. Unlike Brenden Aaronson, Tyler Adams, Ricardo Pepi, DeAndre Yedlin, or Matt Maizga, Reynolds was not a dominant starter in MLS for multiple seasons before he left. On top of that, he was still relatively new to the right back position.

There was always going to be an adjustment period for Reynolds at Roma. But in the offseason, the club made a coaching change. Gone was Paulo Fonseca, the manager who was eager to bring him in, and in came Jose Mourinho – a legendary coach not known as being favorable with young players.

“I knew that Roma was a big club before I signed. I knew that it wasn't going to be easy,” Reynolds told ASN. “At FC Dallas I could have been the right back for however long I wanted to be there, but I wanted to take my chance and go to the biggest club as I possibly could at the moment. When the first coach was there, Paulo Fonseca, he had a lot of trust in me. When Mourinho came, I knew that he's a big name and he wasn't the coach that wanted to sign me. Of course, I didn't play as much as I wanted to play.”

The first half of the 2021/22 season was tough for Reynolds. Mourinho, as expected, favored veterans. The most difficult moment came on October 22 during a Conference League game when Roma traveled to Norway to face Bodo/Glimt. Mourinho played mostly second-string players, as is common for big clubs in minor competitions. But Bodo/Glimt earned global headlines with a resounding 6-1 win. Mourinho lambasted his players to the media. 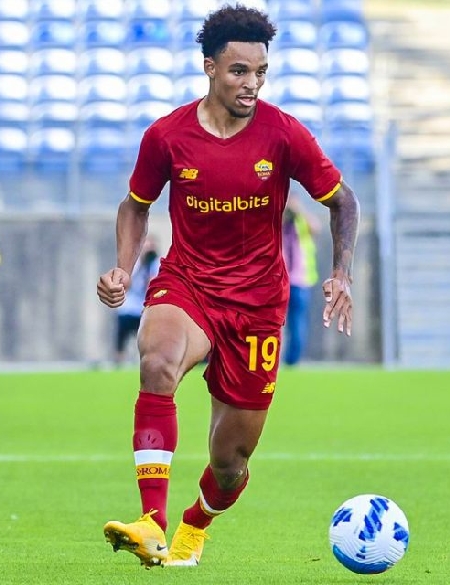 “If I could use the same players every match I would,” Mourinho said. “It's risky because there's a huge gulf between our first choice and second choice players. I expected better."

Reynolds was far from AS Roma’s biggest problem that day, but for a teenage American player and an angry manager who was embarrassed, it became hard for Reynolds to find minutes. AS Roma even agreed to voluntarily release Reynolds for a U.S. national team camp in December that fell outside of a FIFA window.

It became obvious that Reynolds needed to go on loan. After being linked to various clubs in Europe, a loan to Kortrijk was finalized. As one of the smaller clubs in Belgium’s First Division, Reynolds found a club that was looking for a right back.

“The first two to three years at FC Dallas, I didn't play,” Reynolds said. “I already knew what it was like if you don't play. You have to keep a strong mentality and always train well. I went from getting an opportunity every other game to - like I didn't even exist in Roma. You have to stay focused and wait for your opportunity like the opportunity I have now at Kortrijk, to play games and hopefully show Mourinho that I can actually play. That's all I want. Mourinho is my coach, and I just want to do what I can do to impress him.” 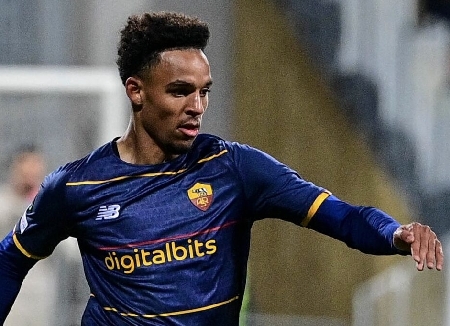 Reynolds is playing regularly in Belgium, but things have been difficult. Since his first game at Kortrijk, the club has played eight games – winning once and losing seven.

“Obviously, the most the most important thing is to play, and I think playing games is the best way for development - and that's what I'm doing,” Reynolds said. “Even though I'm on loan, I still want to win games. It's been a bit tough for the for the team.”

“Italy is a lot more tactical and here it's a bit more - just physical,” he added. “It's a different league and there's a different style of play and you have to get used to it, but I feel like I adjusted pretty well. The speed of play here is actually really fast…. Obviously Serie A is a different level, it's a top five league.”

In Belgium, Reynolds hopes the experience at Kortrijk will finally allow him to grow into the right back position. As a youth player, Reynolds was always a winger and he was on the 2017 United States U-17 World Cup team. There he was part of an attacking contingent that also consisted of Josh Sargent, Tim Weah, and Ayo Akinola.

Back in Dallas, then head coach Oscar Pareja and his staff moved Reynolds around in terms of positions. At first, they tried him at the No. 9, which didn’t work. But then the right back switch showed promise. The only problem is that it put him behind Reggie Cannon, the dependable right back who was playing at a national team level. 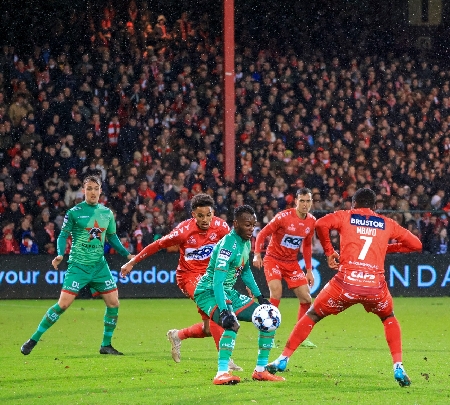 Reynolds took over the starting right back job at Dallas when Cannon was sold to Boavista in August 2020, but after only three months Reynolds was off to Italy. Leaving him without much time to adapt to the position before having to face the demands of not just Serie A, but the top of Serie A.

“I was always a winger - and then one training session, the assistant coach was like: let's see how he does at right back,” Reynolds recalled.  “I did pretty well in in that session and they're like: this can be interesting. But I was training as an outside back and then I was getting subbed in as a winger.  In that moment, I was really confused. It's already difficult enough to change a position - and then also to change a position at the professional level. And then I'm still new to being right back and I'm playing with AS Roma.”

One of the reasons why he wanted to move to Italy is that he wanted to lean the tactics of the right back decision, and it worked in Italy while Fonseca was there. Interestingly enough, he was once even asked to play left back without any experience, even in training.

“I remember before the game he asked me: have you ever played left back before? I was like, No,” Reynolds recalled with a laugh. “And he was like, OK. Then we saw the starting 11 and I am starting at left back in a Serie A match. Actually, that was one of my best games for Roma.” 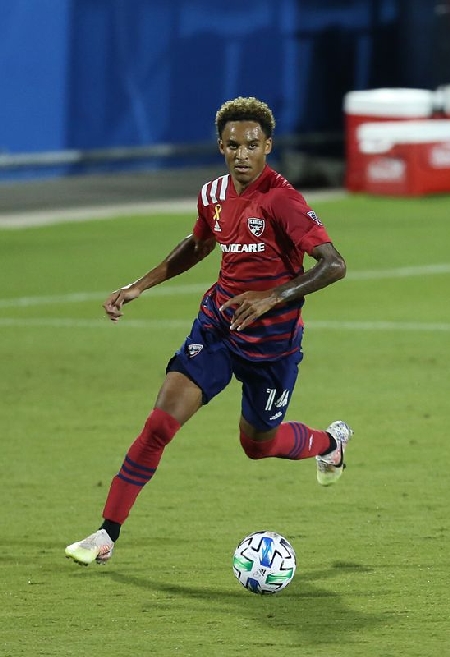 Looking back, Reynolds credits FC Dallas as playing a huge role in his development, and he is not surprised there is a growing number of players who have developed from the clubs academy and who now have caps with the national team – including an impressive list of players who are now at high levels in Europe.

“Ever since I was in the academy, the first team would always have academy kids training with the first team and it was always the best players in the academy. Once you sign for the first team, you started playing games. FC Dallas as the club - I think everybody is just hungry for more and they want to achieve as much as they want as possible. That's why there's so many of us that are at a high level and also some players in Europe. Also guys like Paxton, Jesus, Brandon, and Edwin and I mean those are my best friends and those are all great players…FC Dallas is a great club from the youth levels and also the first team.” 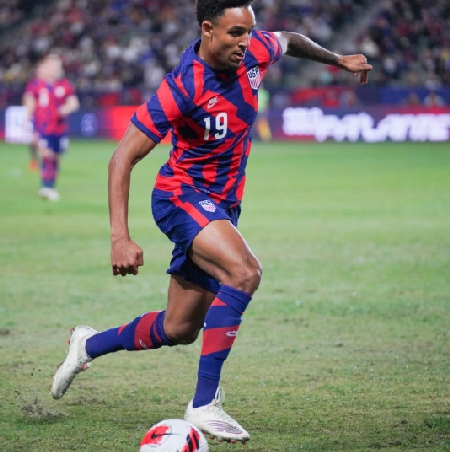 The other big source of motivation for Reynolds these days in the national team and competition at the right back position is extremely tight. Sergino Dest seems to have the starting spot locked down but after him is a steady list of players including Reggie Cannon and DeAndre Yedlin. There are also players such as Joe Scally and Kyle Duncan who are trending up but who only have limited involvement with the team so far. Reynolds made his debut with the team last March in a friendly against Northern Ireland.

When Reynolds was in camp in December, he was happy to see his former FC Dallas youth and first team coach Luchi Gonzalez on the national team staff and he has spoken with Gonzalez who has motivated him to keep pushing hard for a spot.

“I want to go in again and get into that mix,” Reynolds said. “Sergino Dest is there and he's a great player, but I still want to compete. If I can't be the first guy, I want to be the second guy with the team. And that's my that's my goal.”