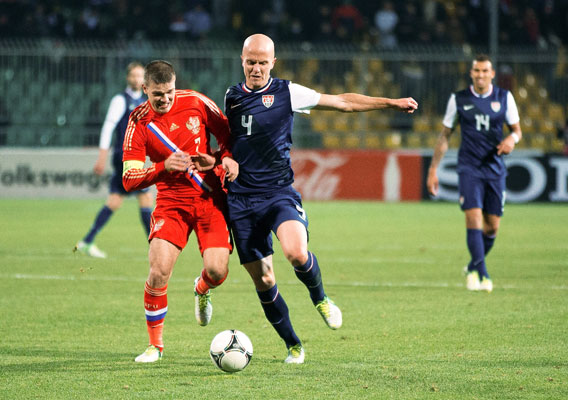 Michael Bradley and Tim Howard led the charge against Russia, and our ratings for these two stars reflect this state of affairs. But what about everybody else? Here's our take on the individual performances.
BY Brian Sciaretta Posted
November 14, 2012
2:00 PM
Style points never win you anything in soccer, but the ability to rally from deficits—twice—on the road against one of the top teams in the world is impressive. And that's precisely what the U.S. national team did Wednesday in its 2-2 draw against Russia. Beyond the result, however, it was a valuable learning experience for Klinsmann and his players. The game against Russia showed that Timothy Chandler is back on board and that young players like Joshua Gatt, Mix Diskerud, and Juan Agudelo are able to contribute. Here are the American Soccer Now grades for the final U.S. soccer match of 2012. STARTERS
Tim Howard (ASN rank #3) : Everton’s goalkeeper gave the U.S. team a result when one wasn’t deserved. He is clearly in rhythm right now and is making the big plays for both club and country. Rating: 8 Timothy Chandler (ASN rank #18) : A decent game from Chandler on his return to the team. He didn’t get a chance to get forward as much as he, and Klinsmann, probably would have liked, but defensively he didn’t get beaten either. Rating: 5.5 Carlos Bocanegra (ASN rank #12) : Bocanegra started the game but was replaced due to injury in the first half. Rating: Incomplete Geoff Cameron (ASN rank #8) : Central defense was a problem but Cameron was the best American player on the backline against Russia. Faint praise, to be sure, but praise nonetheless. Rating: 6.5 Fabian Johnson (ASN rank #6) : It has been a great year for Johnson but the game against Russia was not one of his best performances. He was not able to get forward and his defense was lacking at some important moments. Rating: 5.5 Jermaine Jones (ASN rank #17) : Jones had to play more on the left side in this game and it wasn’t the best fit for him. He made some nice runs into the box but was poor with his final ball. Defensively he was good and was able to match the Russians' toughness. Rating: 6 Danny Williams (ASN rank #7) : Like Jermaine Jones, Williams did a lot of dirty work and had a tough task playing in front of a backline that was struggling. Still, he made some very bad plays and was mostly at fault on the first Russian goal. Rating: 4.5 Joshua Gatt (ASN rank #30) : Despite not playing above the rather modest level of the Norwegian league, Gatt did not look out of place in his first international appearance. It was a tough game for his U.S. national team debut but he should walk away feeling pretty good about himself. Rating: 5.5 Michael Bradley (ASN rank #2) : In the 76th minute Bradley scored yet another terrific goal and was the anchor in the U.S. midfield. He is making a strong case to being the best American player in the game right now. Rating: 8 Herculez Gomez (ASN rank #11) : Gomez was largely ineffective but he worked hard. It’s plain to see that he’s playing a wider position with the national team and it doesn’t suit his strengths as a player. Rating: 5 Jozy Altidore (ASN rank #11) : It was not a complete performance from Altidore, who struggled to get involved in the attack. Still, there were little things that he did well. As the midfield was having a rough time maintaining possession, Altidore worked hard to hold the ball up. He also made a nice run in the second half to get down the right flank, but Jones could not finish the play. Also worth noting: Altidore's first touch let him down in one crucial moment. Rating: 5.5 SUBSTITUTES
Clarence Goodson (ASN rank #28) : The best thing that can be said about Goodson is that he was put in a tough situation, coming on for an injured Carlos Bocanegra early in the first half. He did not play well, and the back line’s situation went from bad to worse when Goodson stepped onto the field. He conceded a penalty in the second half on a play where he was in very poor position. After a rough year in 2012, Goodson will be lucky to earn any more call-ups in 2013. Rating: 4 Juan Agudelo (ASN rank #47) : The former New York Red Bull fell out of favor with the national team after his trade to Chivas USA. Against Russia, however, Agudelo reminded everyone why he is still a very promising young player. He was dangerous. And he's only 19 years old. Rating: 6.5 Maurice Edu (ASN rank #23) : Edu’s club situation may not be good at Stoke City, where he struggles to make the matchday 18, but he was a welcome addition to the national team’s midfield against Russia. When he entered the game, the U.S. just played better, and Edu enjoyed one of his strongest international performances of the year. Rating: 7 Mix Diskerud (ASN rank #38) : In his first international call-up under Jurgen Klinsmann, Diskerud scored the equalizing goal and left the pitch as the hero. He came into the game very late and did not have much time to make an impact, but his stoppage-time strike helped the Yanks earn a result. Rating: 7.5 Sacha Kljestan (ASN rank #15) : Kljestan's composure and maturity are evident in his recent showings. He is on the upswing. Rating: 6 Terrence Boyd (ASN rank #16) : Boyd did not enter the match until the 87th minute but he influenced the outcome when he nodded down a pass to set up Diskerud’s equalizer. Rating: 6 These are our ratings; now we want to see yours. ASN's new Player Ratings tool is now live, and we strongly encourage you to check it out. With it you can rate the players with an easy graphical interface, compare your ratings with experts and other ASN users, and share your ratings across your social graph. Please check it out.