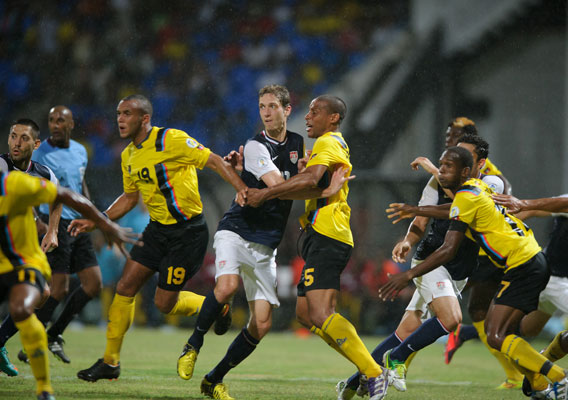 Recent goals from Kyle Beckerman, Clarence Goodson, Jack McInerney, and Alfredo Morales highlight a productive weekend for players hoping to make the upcoming U.S. national team roster.
BY Josh Deaver Posted
May 16, 2013
10:23 AM
Clint Dempsey—ASN rank #2
In one of his best performances for Spurs, Clint Dempsey got the start for Tottenham on Sunday and picked up a goal and a game-winning assist in a vital 2-1 win over Stoke City. After going down early, Dempsey drew the London club level. Capitalizing on a poor clearance from the Potters’ backline, the Texas native hit an instinctive 30-yard chip to equalize in the 20th minute. Dempsey picked up his assist seven minutes before full time, sliding a skillful pass to Emmanuel Adebayor for the game winner. With one game remaining, Champions League dreams are still alive. The club needs to win, and have Arsenal lose, to secure the fourth spot. Check out the highlights here. Jozy Altidore—ASN rank #3
Although it struggled in league play this year, AZ Alkmaar capped off an inspired run in the KNVB Beker Cup with a 2-1 victory over PSV Eindhoven on Thursday. And who else would deliver the game winner than Jozy Alitdore? A 14th-minute strike, his 31st of the year, proved to be the winning goal, as AZ held on to take home the silverware. For the tournament, Jozy picked up seven goals in five appearances, scoring in every game for the champions. By virtue of the win, AZ have qualified for the Europa League. Fabian Johnson—ASN rank #7
Johnson came off the bench at halftime, playing 45 minutes and picking up a pretty back heel assist for Hoffenheim in an ugly 4-1 loss to Hamburg SV. Johnson lined up as an left attacking midfielder in a 4-2-3-1 formation, making the third consecutive appearance at the position. Currently mired in a relegation battle, the loss means the club no longer controls its destiny. In order to remain in the German top flight next season, Hoffenheim must defeat Champions League finalist Borussia Dortmund in its season finale, in addition to Augsburg losing next weekend. Steve Cherundolo—ASN rank #12
On Sunday, Cherundolo set a Hannover record by making his 299th Bundesliga appearance for the club, receiving the start and playing 90 minutes in a 3-1 loss to Bayer Leverkusen. After successfully qualifying for the Europa League last season, this campaign was a disappointment for the club, which will finish middle of the table this campaign. Cherundolo will wrap up his 15th season with the club against Fortuna Dusseldorf on Sunday, before presumably joining the U.S national team for World Cup qualifying at the end of the month. Timothy Chandler—ASN rank #16
After suffering what was deemed a ligament tear in his knee this week, FC Nurnburg announced this week that Timothy Chandler would sit out the remainder of the season as a precaution. The injury, with an expected recovery time of 2-4 weeks, also means Chandler will likely not be ready for U.S. national team camp, which is scheduled to convene later this month in Los Angeles. Brad Guzan—ASN rank #19
Following a breakout season, the 28-year old keeper was named Aston Villa Player of the Year this week. Joining Stuart Holden and Clint Dempsey, it is now the third consecutive year that an American has been given Player of the Year honors by an EPL club. Without Guzan’s weekly heroics, Villa would almost certainly be relegated by this point in the season. Kyle Beckerman—ASN rank #23
Beckerman picked up his first tally of the season on Saturday, notching a 77th-minute go-ahead goal in a heartbreaking 3-2 loss to Montreal Impact. Following a scramble in the box, the ball fell to Beckerman who took a touch to his left and buried his chance. Unfortunately for him, RSL would concede twice late in the match, including a stoppage-time game winner in the 93rd minute. Clarence Goodson—ASN rank #27
Goodson got the start for Brondby on Sunday, playing 90 minutes and scoring a goal in a 1-1 draw with AAB. Goodson put his team on the board in the 37th minute with a strong half volley effort inside the box. It was his second goal of the season. Although Brondby would concede late, it salvaged a badly needed point with the draw. With only two matches remaining, the club is in danger of relegation and currently sit one point from safety in the Danish top flight. Jack McInerney—ASN rank #33
McInerney continued his quest for the MLS Golden Boot this weekend, scoring his seventh of the year in a 1-0 victory over Chicago Fire. In the 75th minute McInerney received the ball in the box off a quick restart, took a deft touch and slotted it past Fire keeper Sean Johnson for the game’s only goal. Alfredo Morales—ASN rank #74
On Sunday Morales made his third consecutive start for Hertha Berlin, playing 90 minutes and scoring a goal in the club’s 2-1 win over Koln FC. Morales has played a big role since breaking in with first team early in the year, earning frequent minutes during the club’s stretch run towards Bundesliga promotion. The 23-year old has improved greatly this year, and may have earned some time with the national team this summer. With the U.S. roster announcement expected later today, which fringe players would you like to see on the squad? Share your thoughts in the Comments below. Josh Deaver is a former academic turned soccer obsessive. Follow him on Twitter, @USFootballGuy.