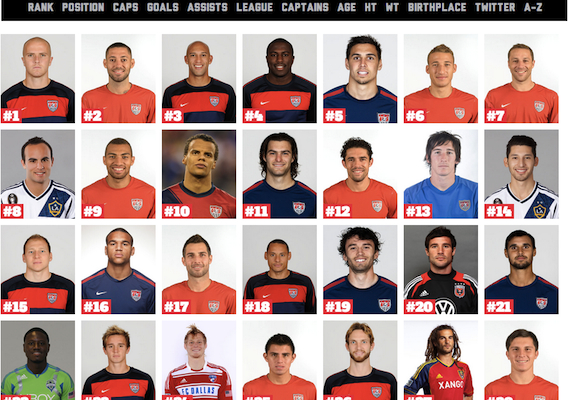 ASN 100 Update: Jozy and Brek Up, Landon Down

Every month we get top soccer analysts—including Jimmy Conrad, Alexi Lalas, and Grant Wahl—to rank the top American soccer players. Here is our up-to-the-minute list, the February 2013 ASN 100.
BY John Godfrey Posted
February 02, 2013
4:38 AM
IF YOU'RE NEW to American Soccer Now and don't know what the ASN 100 is all about, we have something for you to read. Crucial: We are not ranking based on future potential or past glory. This list, updated every month, is intended to be a depth chart for today— it's the "now" in American Soccer Now. For the rest of you diehards, let's dive hard into the latest results. First off, there have been a few big changes in the Top 10: Landon Donovan has dropped from No. 3 all the way down to eighth. Though physically healthy, Donovan will not be on the squad when the Yanks begin the final round of World Cup qualification. The famously indecisive star doesn't know if he wants to continue with the U.S. national team. And ASN 100 panelist/ESPN analyst Alexi Lalas thinks we have seen the last of Landon in a U.S. kit. Moving in the opposite direction, Jozy Altidore has catapulted from No. 8 to No. 4 on the strength of a ridiculously productive start to 2013. Altidore now has 15 league goals this season for AZ Alkmaar, and he has tallied eight times in his last six matches. Can this deadly run of form translate to the national stage? We'll be watching.... Further down the rankings, Carlos Bocanegra continues to move further down the rankings. Captain America came in it at No. 9 when we debuted the ASN 100 in October 2012; he was 15th last month; and now he finds himself in the 17th position. That move to the Spanish second division isn't helping his standing. Conversely, Omar Gonzalez has moved up steadily since our initial ASN 100—he was first listed at No. 21 and is now all the way up to No. 14. Will this translate into a starting spot in the Hexagonal opener against Honduras on Wednesday? Or will the more experienced Bocanegra retain his spot alongside Geoff Cameron? It will be one of the biggest decisions of the day for U.S. coach Jurgen Klinsmann. Moved up: Stuart Holden (welcome back), Aron Johannsson (wishful thinking?), Brek Shea (bon voyage). Moved down: Maurice Edu (though Turkey should help) and Brad Friedel (when will he get another game?). Two last things: If you aren't using the tabs within the ASN 100 to reassemble the lists and rank the players by, say, age, position, height, or Twitter followers, you really aren't doing it right. Spend some time—you will be rewarded. Also, the roster of ASN 100 Panelists has proved to be quite stable so far, but there have been a few changes. The inimitable Jimmy Conrad has joined our ranks, while two of his former U.S. national team colleagues, Taylor Twellman and Kyle Martino, have dropped off for the moment. (Both got busy, and both are welcome back any time.) With the exception of one individual who prefers to remain anonymous, here is the current roster. Please give them a follow, or at least a tip of the cap.

All right—enough blah-blah. Here's the February ASN 100. Check it out. (And be sure to tell us what we got wrong. We love that.)