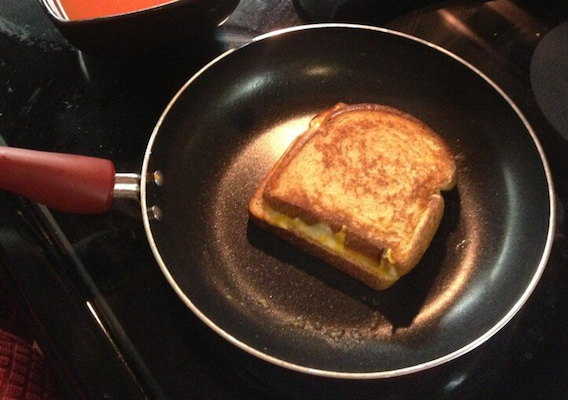 The Sporting Kansas City midfielder takes to the kitchen for a bit of food preparation, while A.J. DeLaGarza goes the sushi route and Mix Diskerud just wants to grab some quick shut eye.
BY Jesse Yomtov Posted
March 02, 2013
8:50 AM
10. Graham Zusi—By far the most consistent comfort food on Earth

It's a grilled cheese and tomato soup kinda day twitter.com/gzusi/status/3…

9. Sacha Kljestan—Well now that you put it that way…

Can U imagine if The Bachelor happened in real life? Dude dates few girls at same time(and they know) then just proposes after 1 month WTF??

8. Mix Diskerud—Overcoming the hatred of running is what makes you a pro athlete:

What I really think twitter.com/MixDiskerud/st…

7. Joe Gyau—Slicing a burger in half is one thing, pizza is a different story…

6. Heath Pearce—I really thought I was weird for doing this all the time

5. Terrence Boyd—That’s really all you have to say

4. A.J. DeLaGarza—Scrumptious use of Vine

3. Juan Agudelo—Why you gotta be so selfish mom?

If my mom held me in her stomach for one more month I would have been eligible to play u-20s national team this year. #commonMom! ????

Remember when I megged you in practice today @themichaelowen #haha

1. Maurice Edu—Seriously Jozy, your goals are just inconveniencing everyone at this point