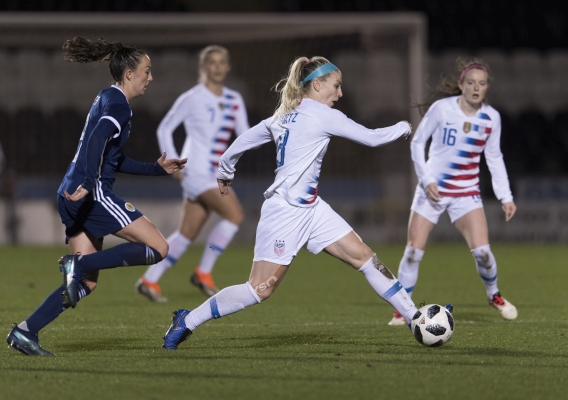 As the World Cup year kicks off, Ertz sees the USWNT gaining momentum

The USWNT is set to begin an ambitious schedule leading up to this summer's World Cup and ASN's John Halloran spoke at length with midfielder Julie Ertz on the team's state heading into a big year for the team.
BY John Halloran Posted
January 17, 2019
4:20 AM
SIX MONTHS out from the 2019 World Cup, things couldn’t be going much better for the United States women’s national team. The team hasn’t lost a match in a year and a half and won both the SheBelieves Cup and the Tournament of Nations in 2018 against some of the toughest competition in the world.

In the fall, the team breezed through World Cup qualifying with five wins and five shutouts, all while outscoring their CONCACAF opponents 26-0.

However, this cycle hasn’t always been so smooth. Coming off the team’s Olympic disappointment in the summer of 2016, the U.S. couldn’t find its groove. A series of head coach Jill Ellis’ tactical and personnel experiments in the spring of 2017 didn’t go according to plan, and the team struggled into the summer while losing matches at home to England, France, and Australia.

The turning point came in San Diego in July 2017. In the second match of the Tournament of Nations, the U.S. faced Brazil. The Americans had started the game in a new-look 4-3-3, but had gone down early—in only the second minute of play. In the second half, Ellis decided to gamble, and subbed on Julie Ertz as the team’s holding midfielder.

Ertz had no idea the move was coming. Although one of the heroes of the 2015 World Cup, she had played that entire tournament as a center back. And following the team’s disappointment at the 2016 Olympics, the defender had found starts hard to come by at any position, going 11 months without earning a nod in the U.S.’ starting XI.

The substitute appearance against Brazil, however, proved a revelation. Late in the contest, Ertz—in trademark fashion—pounced on a loose ball in the box and hammered it home for the game-winner. The U.S. won the match 4-3 and hasn’t lost since, an unbeaten stretch that has now reached 28 games.

Looking back on the period after the Olympics and that 11-month period without a start, Ertz admits she struggled.

“I’ve learned that adversity kind of challenges you in different ways,” she told American Soccer Now. “The beauty of this team is that everyone wants to start and, obviously, on the field, you only get 11.”

“At the same time, it made me more hungry and you learn a lot about yourself,” she added.

Ertz took the time out of the starting lineup to set new goals and push herself to a new level.

“What you learn is that you control what you can control,” said Ertz.

“It’s just a step,” she added. “There’s really no guidebook for it. At this level, a lot of the game is your mental part as well and it was not the best time of my career, but it was a [time to learn] and I think those are just as important.”

During the transition, she had begun playing the No. 6 position at the club level with her National Women’s Soccer League team, the Chicago Red Stars.

That move would turn out to pave the way for her new role with the U.S. When the opportunity arose to play a new position at the international level, the Arizona native was ready to make a seamless transition.

Since the switch, Ertz’ inclusion in the lineup, and her defensive presence in front of the U.S.’ center backs, has helped shore up the backline, as well as allow the team’s outside backs to go forward into the attack as Ellis prefers. However, Ertz is hesitant to claim any of the credit for the team’s recent success.

“Our team is very good,” Ertz emphasized. “I would hope that I bring a defensive presence in the midfield, obviously being a defender, and hopefully a voice that way and maybe a different look. I think I’m naturally more of a defensive player first, just from having played in the center back role.”

“The way our outside backs are, and just the type of players that they are, and the formation that we play, you want them to [go forward],” she added. “I always hope that whatever I can bring to the team can help anyone in any way.”

With World Cup qualification taking place so late in the cycle, the Americans—despite their form through 2018—didn’t take anything for granted heading into October’s CONCACAF tournament. Ertz even went as far as saying “2019” instead of “World Cup” when referring to the tournament as a way of reminding herself not to look past qualifying.

Overall, the Santa Clara alumna was happy with the team’s performance and the confidence it gives the squad heading into this year.

“I was so proud of the girls and the team,” she explained. “We used [our] depth on the team. We had a lot of variety in our attack as well. Scoring a lot of goals is always good, but how we did it and our team’s defensive work collectively—it was a really good time to put everything together.”

Now with their focus fully on the World Cup, the U.S. will start the year off with a pair of friendlies in Europe against host-nation France and then Spain three days later.

“To be able to play the World Cup host in their own country in a venue that you could possibly be playing in—there’s nothing like it,” said Ertz.

“It’s really awesome that the coaches were able to get that to happen.”

The matches against France and Spain are part of an ambitious 10-game pre-tournament schedule for the Americans, which also includes matches against top-ranked teams like England, Brazil, and Australia—something Ertz describes as “the hardest schedule that the federation has ever had.” The midfielder thinks these games will provide an important opportunity to put the finishing touches on the U.S.’ World Cup preparation.

“The biggest thing in 2019 is putting those [pieces] all together and seeing what a team presents us, and being able to, on the field, figure out the best way to break down [our opponents],” said Ertz.

“I’m just really excited to go out there and come together as a team for the first game of 2019.”