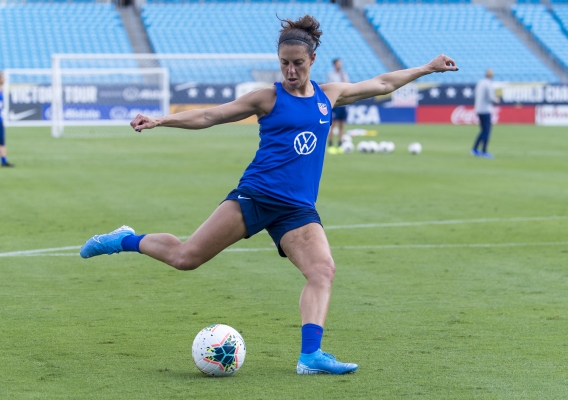 As the Victory Tour wraps up, Lloyd still holds Olympic ambitions with the USWNT

At 37, Carli Lloyd is one of the most accomplished women's players ever having won two World Cups, two Gold Medals, and having twice won the FIFA Women's Player of the Year. ASN's John Halloran spoke with Lloyd in Chicago and the New Jersey native said she holds hope of making the Olympic team next year.
BY John Halloran Posted
October 05, 2019
10:00 AM
CARLI LLOYD doesn’t know whether she wants to keep playing for the United States women’s national team in 2020, but she is sure about one thing—she wants a fair shot at making the roster for the Tokyo Olympics.

Despite scoring the game-winning goals in both the 2008 and 2012 Olympic finals, segments of the U.S. fan base and punditry have written off Lloyd multiple times in her career. Then came the 2015 World Cup final, where her hat trick against Japan seemed to finally seal her legendary status among the all-time greats of the American team.

However, only two years later, she contends she fell out of favor as a starter with the national team following an injury sustained while playing for her club side in the National Women’s Soccer League. Since then, Lloyd has been relegated primarily to a role as a backup forward. In the 2019 World Cup, the two-time FIFA Player of the Year started only one match.

The U.S. is set to play South Korea on Sunday in Chicago, the final match of a Victory Tour celebrating the team’s 2019 World Cup win. The match is also the final game for outgoing head coach Jill Ellis.

Lloyd—who’s scored 12 goals for the U.S. in 2019 despite only starting five games—is waiting to see who the next coach is before making a decision on her national team future.

“I want to play more,” said Lloyd. “My ability hasn’t slowed down. I’m probably playing the best football of my career—the stats speak for themselves. I feel great, [my] body feels great, and for me it’s about having the new coach come in—if I’m in the plans for the Olympics and going to be given a fair shot—I’m going to go for it.

“There’s no doubt in my mind that I’m still good enough and capable enough to be out on that field helping this team. That’s my plan, [I’m] just kind of waiting to see. I’m going to play for as long as my body allows me.”

Following the 2015 World Cup, Lloyd originally targeted the 2020 Olympics as her swan song. But following the 2019 tournament, she began to openly talk about how difficult the past few years as a backup had been and questioned whether or not she’d want to keep going with the national team.

And while proving doubter wrong has always been part and parcel of her journey, at this point in Lloyd’s career, she insists her No. 1 goal is just trying to get better each and every day.

“While people are sitting here judging and people are sitting here wondering if I should even be on the World Cup squad, and wondering if I can even make it to 2020, I’ve lived and breathed this game every single day of my career,” she explained. “I’ve taken care of myself; I’ve taken a tremendous amount of pride in making sure that I recover. I’ve worked my butt off every single day, and that’s the formula.

“I think there’s people that are going to doubt every single time. But I know in my heart what I’m capable of and it’s that burning desire to just continuously get better every single day. The older you get—I’ve got thick skin—I don’t really care what people say anymore, at all. They can say what they want.”

Mentor James Galanis has heavily influenced Lloyd throughout her career and, without prompting, she explains how his vision has continued to shape her growth. Lloyd says Galanis has pushed her over the years to move beyond her physical attributes and focus instead on improving the speed of her thinking on the field.

“He’s had a vision of me getting to this point and becoming the best version of me, becoming a better thinker, becoming a smarter player, using my brain out on the field versus using my body,” Lloyd explained. “I evolved in that every single year and I’ve continuously gotten better and that’s been my No. 1 goal.”

“All these years of working with him, I’ve been uncomfortable. I’ve never been doing a training session where I’m not getting out of my comfort zone. I’ve been willing to be uncomfortable, in order to be comfortable and work on my weaknesses. I’m the first to say, there’s been loads of things that I’ve had to improve on in my career. I’ve never not wanted to improve as a player, but I think it’s the delivery in a coach. Good coaches get the best out of you. Good coaches know how to inject confidence, but also know how to inject a message of pushing you on and making you better and he’s been that for me all these years. I want to keep getting better until the day I hang up my boots.”

After the Victory Tour wraps up on Sunday, Lloyd will go back to her club, Sky Blue, to finish out the 2019 National Women’s Soccer League season. Last year, the club won only one game and endured numerous reports of poor conditions off the field. However, things have turned around this year, particularly in recent months. Regardless of what happens with the national team, Lloyd does think she’ll be back at the club level next season.

“I don’t see myself being done in the next year,” she said. “I’m committed to Sky Blue, I’m committed to [the national team] as long as I get a fair shake at competing every single day and proving to the new coach that I’m still capable of performing at this level. That’s ultimately it. I’ve learned to just take it one day at a time. I’m in a really good place right now with just my whole life, feeling balanced.

“Things at Sky Blue [were] tough in the beginning this season, but as we’ve come in after the World Cup, it’s gotten a lot better. I credit that to our GM Alyse [LaHue]. She’s done a fantastic job of trying to turn this thing around. Tammy Murphy, the governor’s wife, has been heavily involved this year. We’ve got a really good group of people. I think that’s what makes a great team, having good people—people that aren’t going to be negative, that aren’t going to be coming up with all these different excuses, [people] that are just going to be there for one another.

“We’ve shown with that, the results come.”