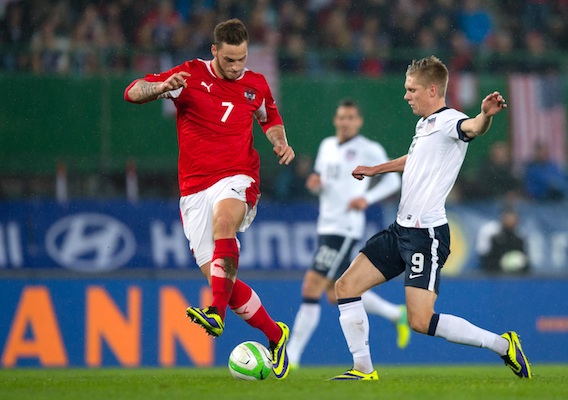 Will the Icelandic-American leave the comfortable environs of AZ Alkmaar in the Dutch Eredivisie for Stoke City? It might not be a bad move for the talented striker.
BY John Godfrey Posted
January 04, 2014
11:26 PM
WHEN THE RUMOR MILL churned out the "news" that Glasgow Celtic was trying to lure Aron Johannsson to the Scottish Premier League, many American fans groaned. Yes, Celtic is a powerhouse squad with great tradition and an all-but-guaranteed spot in the Champions League each year. But the competition it faces each week—including the likes of Ross County, Partick Thistle, and Heart of Midlothian—is quite weak. The latest Aron Johannsson rumor is more encouraging. Stoke City, currently sitting 12th in the English Premier League, is reportedly interested. A move to Stoke City would certainly give Johannsson a chance to compete against superior competition, as the team faces Liverpool, Manchester United, Arsenal, and Manchester City in the next two months. Though solidly positioned mid-table, the Potters have a -11 goal differential in the EPL, having scored just 19 goals in 20 matches. Midfielder Charlie Adam leads the team in goals with four, and lead striker Peter Crouch is rumored to be on the move during the January transfer window.
AZ PSV Johannsson by Counterpoint1 If Johannsson, currently ranked 8th in the ASN 100, does indeed go to the Staffordshire team, he would join three other Americans on the club's books: first-team regular Geoff Cameron, Maurice Edu, and Brek Shea, who is currently on loan to second-division Barnsley. What's your take? Would you lie to see Johannsson at Stoke? Should he stay in the Netherlands? Or is Celtic a better option?