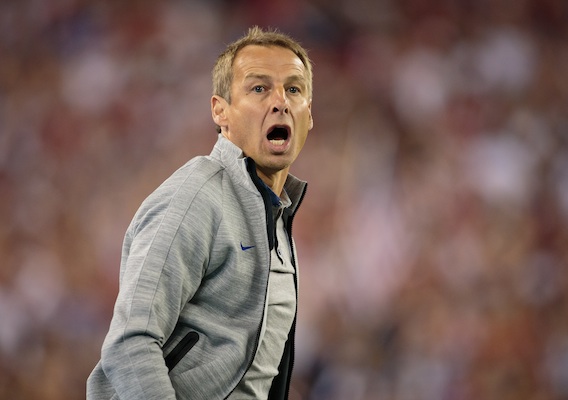 Another Week, Another Crotch-Related Incident

Clint Dempsey returned from his suspension for gonad-slapping to score a hat trick against Portland. Aron Johannsson was on the receiving end of a bizarre grope but responded by scoring a big goal.
BY Josh Deaver Posted
April 08, 2014
11:15 AM
Jozy Altidore—ASN rank #6
A few weeks ago I said Jozy Altidore would not appear in this space again unless he scored a Premier League goal. While that still hasn’t happened, I admit I didn’t appropriately account for a possibility of the beleaguered striker sinking further in to the abyss of European footballing ignominy—but yet, here we are. On Monday, Altidore was dropped from the Sunderland game day roster in a 5-1 loss against Tottenham, instead receiving the start…for the Black Cats reserve squad in a 3-1 win over the Spurs U-21s. After months of the kid-glove treatment by manager Gus Poyet, the fists are flying in what has become a contentious state of affairs for Altidore. “I’m not a charity,” Poyet said after leaving the under-performing striker from the Sunderland Capital One Cup Final squad last month. Aron Johannsson—ASN rank #7
So…this is weird. I don’t think I need to pull out the Telestrator to diagram this play, but the blond one is U.S. national team striker Aron Johannsson, the other guy is Roda JC defender Guy Ramos, and that…well, is what the Dutch refer to as a "junk jostling." Johannsson was pulled...er, called into the starting XI on Saturday, playing 90 minutes and scoring his 26th goal of the season in a 2-2 draw with Roda. The Icelandic-American had a golden chance to steal the three points for AZ in stoppage time, but somehow sent his effort over the bar from just outside the six-yard box.
Aron Johannsson by goalsandmore Clint Dempsey—ASN rank #8
In an early candidate for MLS match of the season, Saturday’s Seattle-Portland derby lived up to all the hype and more. The eight-goal thriller, finishing 4-4, saw the U.S. national team captain return from his testical-slapping suspension in grand style, getting the start and notching his first MLS hat trick as he led the Sounders back from a two-goal deficit to steal a point at Providence Park. After an early Seattle goal—and two lightning-quick responses from Portland—Dempsey capitalized on an awful defensive mistake form the Timbers in the 24th minute before calmly slotting his shot to draw the match even heading into the break. With Portland leading 4-2 in the 85th minute, a slide-tackle-of-a-goal by Dempsey sparked a furious finish. Less than a minute later, DeAndre Yedlin drew a penalty on Ben Zemanski, a chance that Dempsey buried for his fourth goal in three appearances this season. Alejandro Bedoya—ASN rank #14
Bedoya picked up his 18th start in Ligue 1 action on Saturday, playing 90 minutes for FC Nantes and scoring his 4th league goal of the season in a 3-1 loss to AC Monaco. Down 3-0 in the final quarter-hour, Bedoya managed to pull back a late consolation goal for the Canaries, getting his head to a Johan Audel cross and placing his effort top corner for the goal. With the loss, Nantes has fallen into the bottom five after an extraordinary start to the campaign. It will face fellow strugglersGuingamp next week. Danny Williams—ASN rank #32
As some players fall further and further away from Jurgen Klinsmann’s World Cup roster, a few relative outsiders continue to make their case. Reading midfielder Danny Williams, for one, is making some noise. Getting the start Saturday, Williams went the full 90 and scored the lone goal of the match in a 1-0 win against Charlton. In the 73rd minute Williams ran unmarked into the penalty area before receiving the ball and firing a strong, side-footed effort past the keeper to help the Royals in their ongoing promotion fight. The win puts Reading five points clear of Nottingham Forrest for the final playoff spot with only six matches remaining in the Championship campaign. For Williams it’s truly been a break out year. In his 5th professional season, the 25-year-old has registered career highs in minutes played, starts, appearances and, now, goals scored. Jack McInerney—ASN rank #38
Sacre Bleu! Sometimes it’s really hard to figure out what the folks in Philadelphia are doing. Offseason moves, like the one that landed Maurice Edu, seemingly had the team poised for a resurgent 2014. Then, just like that, the club ships its top goalscoring threat and second-to-last club original off to receive 65 cents on the dollar in return. I really expected more #HackworthOut tweets after this one. Regardless, prior to the weekend MLS slate, the Union sent Jack McInerney to Montreal in a straight swap for former first overall SuperDraft selection Andrew Wenger. The deal was characterized by club leadership as the right move based on a perceived all-in commitment to a 4-3-3 playing style. McInerney se joindra à Montréal la semaine prochaine pour un match contre Chicago Fire. Tim Ream—ASN rank #41
Maybe it’s the "Phantom of the Opera" mask, but Tim Ream continues to be a hidden commodity among the U.S. national team pool. Or maybe it’s the mask making him more mysterious and alluring to yours truly. Whatever it is—despite his lack of time under Jurgen Klinsmann, the 26-year-old remains confident that he can crack the World Cup roster. It’s hard to disagree. With more backline uncertainty than ever in the Klinsmann tenure, Ream’s consistency and jack-of-all-trades skill set could make him a fairly valuable utility player come Brazil. Think Geoff Cameron Lite. In the meantime Ream is doing all he can to impress the U.S. boss. This includes his most recent 90-minute shift—again, at left back—during the Wanderers' 1-0 win over Huddersfield Town on Saturday. In his third year at Bolton, Ream has finally lived up to the promise he displayed before departing MLS. With 36 appearances and having already logged nearly triple the minutes of last season, Ream’s output stands head and shoulders above previous campaigns. He’s played every match since February, and appears poised for another start on Tuesday against Doncaster Rovers.

Tim Howard—ASN rank #3
Howard got the start between the sticks on Saturday, making five saves during Everton’s shocking (or not really, depending on how you look at it) 3-0 win over Arsenal. Battling for the final Champions League spot, Everton has won five straight and currently sit only one point back of the Gunners with a game in hand. Sacha Kljestan—ASN rank #15
Despite being Anderlecht’s second-leading scorer, Kljestan has hit a slump to begin 2014. Not great timing, if I say so. He has featured in only six of 13 matches this year, and has seemingly been relegated to a substitute’s role in recent weeks. On Saturday, Kljestan came on for a late 13-minute cameo during a 3-0 win against Club Brugge. Mix Diskerud—ASN rank #16
Currently joining Kljestan on the pine is the Rosenborg midfielder Mix Diskerud. The 23-year-old was once again left out of the starting XI for Saturday’s 1-1 draw with Aaelsund. Unlike last week, he did not see the field so he did not get a chance for any more heroics. Michael Orozco—ASN rank #47
It’s been a bad week for another of Klinsmann’s utility tools. Still looking to crack a World Cup squad, Orozco was first denied release for national team duty by Puebla, before going off injured early in Saturday’s scoreless draw with Atlas. As of Tuesday morning, no update from the club has been released.