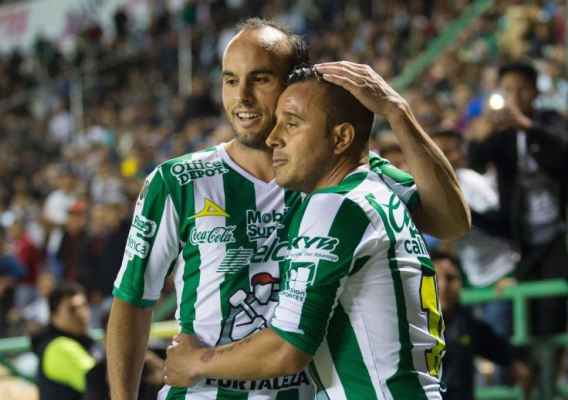 Another Pulassist, another Donovan comeback, & much more.

Landon Donovan earned a loud ovation when took the field again in Mexico, while Christian Pulisic gave everyone a welcome distraction from the presidential election in Orlando. The end result, was a relatively solid weekend for Americans abroad
BY Brian Sciaretta Posted
February 12, 2018
4:50 AM
THE WEEKEND ABROAD was a welcome distraction for American fans who were heavily invested in the events in Orlando. The best American player shined while the greatest ever U.S. national team player began his comeback.

In Holland, Matt Miazga and Vitesse defeated a nine-man Feyenoord team 3-1 while Kenny Saief and Anderlecht are in a four-game winless spell following a 2-0 loss to KV Oostende. Aron Johannsson returned from a midweek injury and started for Werder Bremen in a win over Wolfsburg.

The funniest moment of the weekend, by far, came from Danny Williams who inadvertently flashed a lot of people.

But there were six stories that stood out from the weekend. Here they are.


While most of the American soccer world was focused on Atlanta for U.S. Soccer’s presidential election, Christian Pulisic hit a beautiful assist to Michy Batshuayi to open the scoring for Borussia Dortmund in a 2-0 win over fading Bobby Wood and Hamburg.


Landon Donovan finally made his return to the field on Saturday night when he was he entered the game for Club Leon in the 83rd minute and helped to preserve a 2-1 over Puebla.

As expected, Donovan, 35, was still not at top level fitness and he coughed up a ball on a dangerous play in the box but he still had some crafty touches on the ball and showed good vision. He very well might turn out to be very useful for Leon.

While Donovan won MLS Cup in 2014, it was vastly overshadowed by Jurgen Klinsmann’s decision to leave him off the World Cup. His brief comeback in 2016 was interesting but didn’t amount to much. If this goes well, it give Donovan to close out his career in property style.


It was an American civil war in the Championship when relegation battlers Bolton hosted red hot Fulham which is looking to emerge in the promotional hunt. Antonee Robinson has had a very good first professional season

The London-based Fulham struck first but Bolton equalized in the second half when Adam le Fondre took a header from Robinson and drilled a beautiful shot over the keeper. From an American perspective, Robinson continues to become more and more important to Bolton. His loan will be expiring after the season and it will be interesting to see what his parent club, Everton, does with him.

On the flip side, Ream and Fulham remain in the playoff positions and might have another shot at returning to the top flight.

Yedlin and Newcastle down Man United


When a team is hovering just above relegation, a big win can go a long way towards ensuring safety. On Sunday, Newcastle United did just that with a 1-0 win over Manchester United to move into 13th place of the Premier League – but still only two points clear of relegation.

Yedlin went the distance in the win. It was a tough assignment for the Seattle native but in the end of the day, he would bend but not break. Near the end of the game he made a pair of very nice defensive plays to preserve the crucial victory.


Cameron Carter-Vickers has been an immediate starter for Ipswich Town since arriving at the club on loan from Tottenham last month. He struggled in his final months on loan at Sheffield United when playing in a three-man backline. But in the four-man backline at Ipswich, he has looked a lot better.

On Saturday he helped Ipswich post a clean sheet in a scoreless draw against Burton Albion.

Since arriving at Ipswich, Carter-Vickers has played all 360 minutes of his team’s four games. During that span, Ipswich has conceded just two goals – one was to runaway leaders Wolverhapton.

Chandler shines again at left back

Timothy Chandler is the most puzzling American player of recent memory. At times, he looks like a very good Bundesliga player. But for the national team, he was never able to match the level of play he shows for his club.

But in 2018, he is playing some of the best soccer of his career. On Saturday, he continued his move to left back and was very good in a 4-2 over bottom-feeding Cologne. Playing on the left side, the right-footed Chandler is enjoying cutting into the middle of the field to get onto his dominant foot. He had three shots against Cologne and was active throughout connecting with his teammates.

Most impressively, Eintracht Frankfurt moved into fourth place in the Bundesliga and Chandler could be in line for a Champions League spot next year.