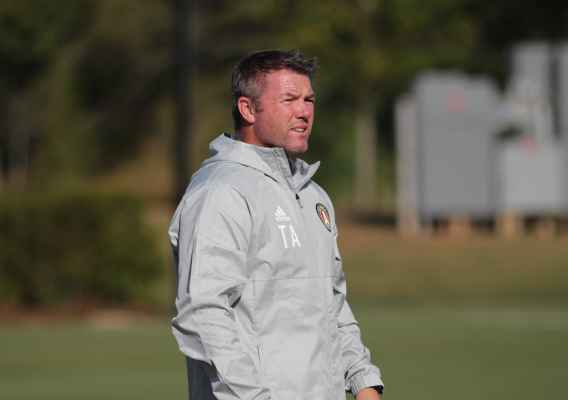 In just its first year of existence, Atlanta United opened eyes in 2017. In 2018, it will be among the most feared teams in MLS. But looking further into the future, the club wants its academy to have an integral role in its success. ASN spoke with Atlanta United academy director Tony Annan on his and the club's vision for developing players.
BY Brian Sciaretta Posted
February 01, 2018
11:30 AM
IN ITS DEBUT SEASON IN 2017,  Atlanta United made a huge impression in MLS for the crowds it drew, the style the team played, and the star power it brought into the league. But the organization has bigger plans for the future and it revolves around its academy.

This week, ASN spoke at length with its academy director Tony Annan about the club’s approach to youth development, its goals for the future, and how he sees MLS as a whole giving valuable first team minutes to the players it develops.

A native of England, Annan has vast experience developing players in the Atlanta area and is a founder of the Georgia United DA program. At the moment, Atlanta United has some of the nation’s top prospects in its program including Andrew Carleton, Chris Goslin, and George Bello.

Brian Sciaretta for ASN: There has been so much talk about Atlanta United’s first team and the high profile players it has imported into the league. How do you assess the progress of the team’s academy?

Tony Annan: Obviously we are a very young academy, only in our second year. We made some big steps and produced some players that are coming out as homegrowns right now. They've only spent one year in our academy so we can't take full credit for their development. It's the guys coming through in the next couple of years that we will be judged on.

We're trying some different methods across the academy to produce better players and not make it so specific at an early age. We're trying to mix up the development path a little so it's not just on the field and kicking the ball around. We're bringing in some new ideas to try to broaden the holistic approach to development as opposed to the old method of getting the balls out and training every day. We do that but we try to sprinkle in new methods. We'll either fall on our face or we will get it right.

ASN: How close is your relationship with Tata Martino and his staff? How much integration is there between the youth teams and the first team?

Annan: I meet with Tata once a week and I chat with him. Our U-19 coach Rodrigo Rios is on the pitch with them every day. We're all allowed to go to training and be on the field. It's a very open door to the first team with both the players and the staff. Tata's assistant Jorge Theiler was academy director at Newell’s Old Boys for 10 years so I have picked his brains as well. But if you watch our teams play from the U-13 through the U-19s, there is a definite style of play that matches the first team.

Our first team gets a little bit criticized for being so wide open sometimes. We've seen with youth players that you need to deal with a bit of a balance. You can't just allow them to fly and do everything they want. We are a little bit more balanced and a little bit more conservative, I would say, but we do go forward and our ball movement and our patterns in the final third are very, very similar to the first team. We try to do that so there is something to aim for and the guys can progress through the club. If they do go to train with the first team, they are used to the way they play and the way they train. We get a lot of feedback from Tata and his assistants because they come and watch a lot of our games.

Annan: I grew up in Europe and I was a young apprentice at a professional club. It's always been, in my opinion, that when you're good enough, you'll play. I think a lot of people jump on the bandwagon of "you don't play youth." But is the youth ready to play at that level? You also have to be cautious of pushing a kid into the first team who is not ready. Or pushing a kid into first team minutes who doesn't really have a grasp of what it is. I don't think it's a case of the MLS doesn't play youngsters. I think MLS will play youngsters. The generations coming through are better than they've ever been. It's just a matter of time before we start seeing coaches giving youngsters a chance.

In the European leagues, they are giving youngsters a chance but it wasn't always that way. It's only been in the past 15-20 years when they have really started looking at youth and pushing youth through. When you're good enough, you're ready enough, and you're mature enough, you'll get chances. Some of these guys banging on about not playing youth - well let's make sure that this youth player is ready to handle before you go ahead and do it.

In Europe, there are obviously are some chances that are being given to young players. They're taking them and doing very well. That is fantastic for them. But it takes a certain level of maturity and talent to do it. Pulisic and McKennie are talented, talented kids. They took their opportunity. But who says everybody will? That's one thing in Europe that if you get a chance, and if you don't take it, there aren't many more chances coming your way. I think you'll start seeing MLS pushing through with youth in the next 5-10 years and I think you'll see a lot of it. The mindset will change and kids will get an opportunity.

ASN: You mentioned alternative training methods outside of soccer. What specifically are they and why do you believe they are important?

Annan: We have three things going on that I think are really important at the moment.

One is our individual development program where we are bringing in kids on daily release from schools to get specific training in their positions and in their technical and tactical ability. Within that, they then have a little task at the club every day that they do. We feed them and we have an area where they study. Then in the evening, they train with their age-group team. That is one way of getting more hours on the field to get closer to the European and South American models.

The 16 year olds are at the club full-time. They are getting four to six more hours a week than we would get. We started that program to try to bridge that gap and get more specific training for those players. They are also engaged in community service to give back to the community. Arthur [Blank] has six core values to the organization and one of them is to give back to others and lead by example. We try to make sure the kids in the program go to hospitals, feed the veterans, and feed the homeless. This gives them responsibility and hopefully makes them better people, and more mature than just a sports guy who only thinks about his football.

With our 17’s and 19’s, the sponsor of our academy is SunTrust Bank. We approach them with a joint program on life skills. With the 17’s and 19’s, we have people from SunTrust come in once a month to our training ground. Usually it's on a recovery day when they are not on the field. We have a 12 month curriculum on life skills from financial confidence to financial planning, career opportunities outside of sports, managing your paycheck, the importance of savings and charitable giving….

Those are some of the subjects we cover because at the end of the day, not everyone here is going to be a professional footballer. If they are professional, great, but you still have to manage your money. We have some young kids we've signed and who are making a good living. Looking at the holistic approach, smarter players off the field make smarter players on the field...

The third thing we're doing is exciting for me. I studied in France and I studied in French clubs, and I took a lot of that stuff. With the 12’s and the 13’s right now, there is a pilot program going on right now where they do their training sessions every night but they also have a rotation of judo, gymnastics, and rock climbing. It's more about the mental break away from the pitch but it's also about the muscle development they offer as opposed to just playing soccer. We try to think of other ways away from the game we think helps them develop but it also affects the game. Judo is a 1v1 mentality and a 1v1 psychological battle which takes place all over the pitch but it's also good for their holding and their timing.

ASN: Atlanta United 2 is going to begin play this year in the USL. How important is this going to be for your academy?

Annan: It's crucial. I have friends back in England who I grew up with and work at clubs and they say it would be the best thing for the English league to have, for example, Everton's reserves in the third division or in the Championship but it's against the rules over there to do that. Their U-23 league is a bit of a bubble. To have the USL here and for players like Goslin, Carleton, Bello, and Kunga and get pro minutes against men who are feeding their families on teams that are trying to win the league, it's crucial that they get to play against those teams to show they can develop and move towards the first team. The gap between the U-19 academy and the first team is so far apart.

It's imperative that we get our young players we sign into that team and they play meaningful minutes and they understand what it is like to be a professional. What it is to train every day and play in front a few thousand people every game in a hostile environment. These are all the tools a young player needs.

Tyler Adams is a great example. What a fantastic player but he wasn't ready for the first team. He spends a year in USL and plays a lot of minutes. Then he gets his chance with the first team and takes it. That progression is imperative. You can't just expect them to be brilliant at 18, go straight to the first team, and be a superstar. Very rarely does that happen anywhere in the world. Even with kids that sign with Schalke, they're going to have to prove themselves with their U-19s or the reserves before they go to the first team. It's no different here. Just the level is different at the moment because those clubs are 100 years old. The opportunities are coming and the pathway is looking more like what it should.