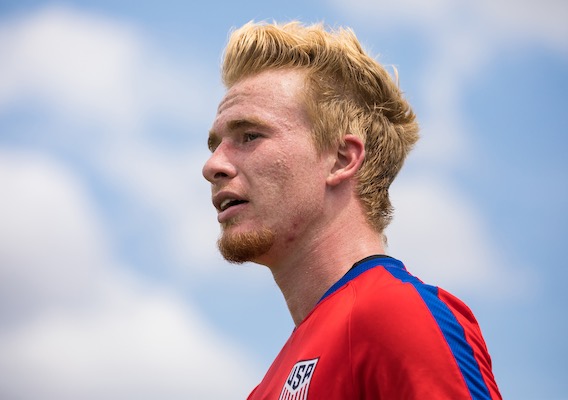 The talented teen is Atlanta United's first-ever homegrown player and a key cog in John Hackworth's under-17 team that will face Mexico in a World Cup qualifier Wednesday in Panama.
BY Brian Sciaretta Posted
April 25, 2017
1:40 PM

THE UNITED STATES U-17 national team lived up to expectations in its opening World Cup qualifying game with a resounding 5-0 win over Jamaica. Several of the players on coach John Hackworth’s team have already made the transition to the professional level, and it showed.

Andrew Carleton, 16, has delivered a number of impressive performances during this cycle and is one of the more compelling players on the team. Against Jamaica, Carleton was generally very dangerous in his 65 minutes of action, although he did not make it onto the scoresheet.

“We go into every game believing in ourselves and our ability to win the game and to do well,” Carleton told American Soccer Now from Panama. “So obviously we're here to win the tournament. The ultimate goal here is to win CONCACAF and qualify for the World Cup.”

Next up for the U.S. team will be a clash against arch rivals Mexico. Whether at the senior team or the youth levels, the rivalry always translates into intense games. Last month, the U.S. U-20 team defeated El Tri in its World Cup qualifying campaign en route to claiming the CONCACAF title.

The U-17s played Mexico in Mexico City in August, and the Yanks took an early 1-0 lead before falling apart and losing 6-3. But the Americans rebounded quickly at the Nike Tournament held at the end of last year. In a round robin group along with Brazil, Portugal, and Turkey, the U.S. won all three of its games, including a 3-0 triumph over Brazil in the finale. The team scored 15 goals and conceded just two in the tournament, and Carleton finished with four goals.

“That was one of the first tournaments we had our full team together—in really forever,” Carleton recalled. “Guys like Tim Weah were able to come over and it was really nice. It was a good tune-up for the qualifiers to play against some of the best teams in the world. But we're not trying to think much about it anymore. It was a great experience for us to get a win on our home turf and take the knowledge from it and use it in this tournament.

“We set the bar high,” he added. “We have a high standard for the team to reach higher goals. We just have to take it day by day. We don't focus on what other people say about us. We just try to get better each day.”

Last year, Carleton made headlines when Atlanta United made him the franchise's first-ever homegrown signing. The Georgia native had drawn the attention of European teams but unlike many other teenage prospects he lacked a European Union passport to facilitate a move. It is unclear how much of a role that played in him signing with Atlanta United but Carleton’s signing was significant for both the club and the league.

The club's technical director Carlos Bocanegra recognized the challenges of developing a player of Carleton’s age. As a player, Bocanegra succeeded both in MLS and in Europe, witnessing many top American prospects succeed and fail for a variety of reasons—many related to off-the-field matters.

“Listen, he has a ways to go,” Bocanegra said of Carleton last September. “Technically he's fantastic. He can see the final pass. He can create his own shot. He can bring other players into the game. Now, physically we need to build him up. Fitness-wise, he needs to get stronger in that area. His decision-making, once you get to the higher levels—when do you take people on or when do you pass?—those things will all come..... It's a big learning curve when you have to go out and play against men, but that's how we want to challenge him.

“The other thing with these kids is that he just turned 16,” Bocanegra continued. “Emotionally and maturity-wise, they're still learning. That's a huge part of it. They're in a locker room after a game doing Snapchat with their buddies and then [next to him] there is a 30-year-old guy who is married with three kids and comes from Slovakia. It's completely different and we have to prepare these kids for those types of situations. It's not only so much on the field where we are focusing but also the social aspects as well.”

Carleton saw preseason action with the first team under former Barcelona boss and new Atlanta coach Tata Martino—and he looked impressive. When the regular season started, however, everything changed. Carleton has yet to make an appearance for Atlanta but has made the bench. This aligns with what Bocanegra hinted at when outlining his vision for young players such as Carleton.

“We don't want to hype him up or put any expectations on him,” Bocanegra said. “We think he has a lot of talent and we're going to keep pushing him….We want to give younger players these types of players but they have to earn it."

That said, many around Carleton are impressed with him right now. Specifically, they like his humble nature and his ability to tune out the common hype that follows young players at the first hint of success at the youth level.

Last year, Atlanta loaned Carleton to its USL affiliate, the Charleston Battery, and at the time current Portland Timbers and U.S. U-20 forward Jeremy Ebobisse was also at the minor league club.

“He's one of those guys where I know there is a lot of hype about him because of the stuff he's done over the year—and it's totally warranted,” Ebobisse said. “He came in from day one and was one of the first people in the locker room and last people to leave, every day. He has the work ethic. He has the skill set, and there is no doubt about that. But at that age, we're usually worried about the youngsters getting ahead of themselves thinking that they've already made it. He knows he has a lot to learn, which is great. He's humble and he works hard. He's got a bright future and Atlanta will do him well.”

Bocanegra also stressed that it was important for Carleton to continue to socialize and play with other players of his age this year. To that end, the U-17 team is a welcome break. The group of players is very tight and it is the final U-17 team that will consist of players coming from U.S. Soccer’s residency program—which will close this year.

Hackworth, however, points out that Carleton is now a veteran leader on this team—which stands in stark contrast to his MLS status, where he is one of the league’s youngest players. The coach is relying on that experience to provide leadership both in qualifying and potentially at the World Cup.

“This is a close group of young men,” Hackworth said before the start of qualifying. “Andrew and I were speaking about it the other day. We were talking about his experiences and adjustments in becoming a pro with Atlanta United, then returning here and integrating with the guys in residency. He said, ‘Coach, these are my boys. I love these guys.’ Enough said.

“Our hope is that they have matured and can bring elements of the experiences they have gained that will make our team even stronger.”

The question of how strong this team can be remains to be seen but there is quiet confidence among those close to this U-17 team. But like anything in youth soccer, results and performances can vary significantly from one game or tournament to the next.

“We'll see how it goes,” Carleton said. “Our team is definitely very talented. If we come together, we can make a very special run at something.”