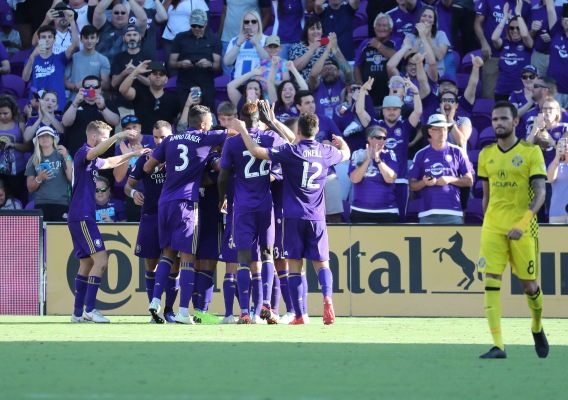 And down the stretch they come: Zlatan is MVP, Crew thoughts, & much more

Sunday set the stage for the final weekend of the season. Some teams are sitting pretty, others are in the middle of a collapse. Here are some thoughts about the Crew's bipolar season, Zlatan being the MVP, and more.
BY Brian Sciaretta Posted
October 22, 2018
10:00 AM
THERE WERE a lot of lessons to learn from the second-to-last weekend of the regular season – in particular, the Eastern Conference just seems to have so many teams that are dangerous and fun to watch. The Western Conference has Zlatan and a bunch of teams that are so hard to read.

Sunday’s games set the table for a Decision Day that could see some teams rewarded for a remarkable push in the final months of the season. It could also see teams choke it all away.


The storylines that surround the Columbus Crew in 2018 have been the tops in the league – and that is really unfortunate because the team really isn’t that good. Thankfully the team looks as if it will be saved – and that’s good. But the #SaveTheCrew movement was depressing, albeit necessary.

But the quality on the field has been up and down, but lately it’s been mostly down. On Sunday, the team could have clinched a playoff berth and all it had to do was bean an awful Orlando City team. Somehow it failed in that respects.

For fans of the U.S. national team, it wasn’t particularly comforting to see the likely next U.S. national team manager take a vastly superior team and travel south to a nearly empty stadium needing only a meager result against a terrible and eliminated team to advance to the next stage – only finding a way to blow it. Sounds familiar?

But Gregg Berhalter is lucky. Now Columbus gets to return home next weekend to face a Minnesota United team that bleeds goals. If Columbus fails to win, a Montreal win over New England will likely be enough to complete a spectacular choke.

Two things to make of this.

Second, if the Crew collapse, it will look bad if U.S. Soccer hires Gregg Berhalter. U.S. Soccer needs momentum in the hiring of its next men’s national team coach. If Berhalter fails, the first questions will be about answering for a failed season with bad losses down the stretch. It doesn’t mean Berhalter couldn’t succeed, but it will seem as if the decision to hire him didn’t take into account his results – when it should.

Zlatan is the MVP


The LA Galaxy need only a draw against Houston on Sunday to qualify for the playoffs. It’s amazing given that the team looked completely lost midway through the season. But they have Zalatan and that’s all they need – perhaps to even win MLS Cup. The Swede had 22 goals and 10 assists in 2053 minutes across 26 games.

Does anyone doubt that the Galaxy won’t be able to get the needed result against Houston?

Zlatan is the MVP and there is no question. Josef Martinez has had a great season but Atlanta has a lot of talent, is well coached, and is well supported. Even a guy like Wayne Rooney has been so good because he’s elevated the rest of his team to play so well – like Luciano Acosta, Paul Arriola, Russel Canouse, etc. Zlatan really hasn’t done that. He’s just doing everything on his own – and that’s enough.

Without Zlatan, the Galaxy are having another dreadful season. With Zlatan, it could beat any team on any day. There is so much wrong with the Galaxy right now. The academy has never taken advantage of the talent-rich Los Angeles area, the team is overall poorly put together, and there are so many questions surrounding the coach and front office. Zlatan has helped the Galaxy overcome all this – at least this season. The problems will unfortunately continue.

But Zlatan’s value between what the Galaxy would be without him and where they are now is enormous. He’s the MVP.

Making sense of the West’s Top 4


Getting a sense of how the top four in the Western Conference in LAFC, Sporting Kansas City, FC Dallas, and the Seattle Sounders stack up against each other is tough.

All four teams have had their moments this year of looking like contenders and looking like paper tigers. Bob Bradley should certainly be considered for the Coach of the Year and the team and it has a chance to finish first overall in the West with a win over Sporting Kansas City. Meanwhile, Dallas (at Colorado) and Seattle (home against San Jose) have very winnable games on Sunday.

Regardless of how the teams finish, Dallas has had two important tests in recent weeks and has failed them. The loss to DC United on the road and the home loss to Sporting Kansas City really make it seem as if it could be in for a hard road in the postseason. It needs to win its last game and get back into the first round bye. A loss could force Oscar Pareja’s team to either face the Galaxy or Portland in the first round.

If Sporting Kansas City wins its finale against LAFC, it will enter the postseason with a wave of momentum with road wins over Vancouver, FC Dallas, and then LA at home. It’s hard to bet against them right now.


Right now, there is just so much better soccer being played in the Eastern Conference.

The race for the Supporters Shield between Atlanta and the New York Red Bulls has been superb. Both teams are just so consistently good and well coached, that it shows. Neither team has had a bad outing down the stretch – which is impressive given that each team knows a mistake will cost them a chance at the Shield. Atlanta has the offense, the Red Bulls have a system and a defense.

Then you have DC United which is a team no one wants to play. There is also the Philadelphia Union which, even in a loss to the Red Bulls on Sunday, showed that it can play hard with the league’s best. Along with Bob Bradley, Jim Curtin should be in the coach of the year discussions for helping the Union’s turnaround.

The only thing you can say of how it will turn out is that in the playoffs, DC United could find things a lot more difficult if it has to face its knockout round game on the road. It has taken care of business at home but that advantage is ending soon.

Philadelphia had a nice opportunity this weekend to send New York City stumbling into the playoffs where another very quick exit awaits them – no matter who it faces.

As for the knockouts, Columbus should hold onto its spot – despite playing poorly. Where they finish is anyone’s guess but DC United and Philadelphia are the team’s that deserve to play Atlanta and the Red Bulls in the conference semifinals. Those would be great matchups. With that in mind and in the best interest of having compelling matchup, let’s hope Philadelphia and DC United don’t face each other in the first round.