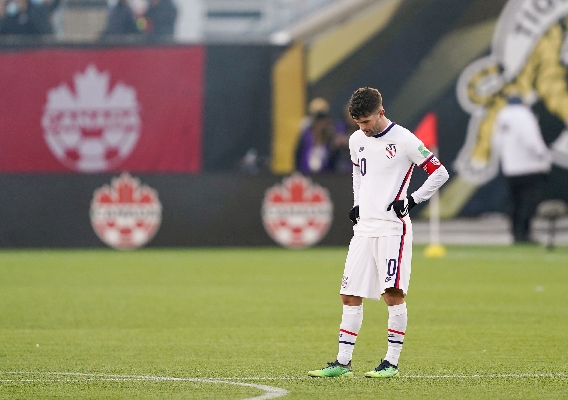 The USMNT suffered a tough loss to Canada and while the team had an edge in possession, its offense had no bite. ASN's Brian Sciaretta breaks down the game after a second viewing
BY Brian Sciaretta Posted
January 31, 2022
12:45 PM

THE UNITED STATES NATIONAL team dropped a 2-0 decision to Canada on Sunday in a defeat which has now raised the stakes dramatically for its Wednesday night clash against Honduras in St. Paul, Minnesota. The loss was disappointing for Gregg Berhalter’s team in that it was decent with possession, but often the possession lacked any bite.

Berhalter kept most of the starting lineup together from the team the defeated El Salvador on Thursday – changing just Brenden Aaronson in for Tim Weah, who was not permitted to enter Canada, Miles Robinson for Walker Zimmerman, and Gyasi Zardes in for Jesus Ferreira. The entire midfield of Tyler Adams, Weston Mckennie, and Yunus Musah stayed the same. The fullbacks of Antonee Robinson and Sergino Dest also stayed the same.

Canada struck first, in just the 7th minute. A weak goal kick from Matt Turner barely reached the midfield line. Canada won the first and second balls, played Cyle Larin into the box on a quick break and Larin made no mistake with the finish.

From there until the end, the U.S. team had the ball but lacked purpose. The narrow field (played at the FIFA minimum of 70 meters) helped allowed Canadian defenders to quickly close down on American attackers.

After Chris Richards was forced out of the game due to injury, the U.S. team was shorthanded since all substitutions were made. Deep into stoppage time, Sam Adekugbe took advantage of open space in the U.S. team’s backline and scored on a counterattack to ensure all three points went to the Canadians.

The midfield trio of Tyler Adams, Weston McKennie, and Yunus Musah has promise and all three players are talented. But it is fair to ask if they are redundant – especially between McKennie and Musah – and if there is enough ability to create. If not, it puts a lot of stress on the front line to do all of the work in the front third. 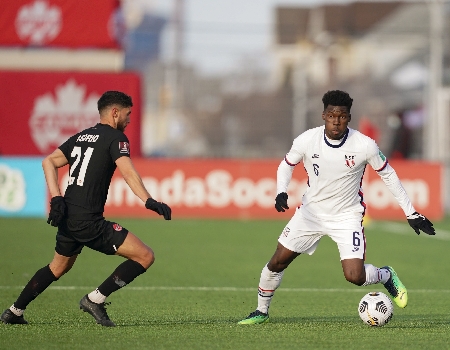 In this game, the U.S. team outshot Canada 13-8 but the better chances were all in Canada’s favor. Most of the U.S. chances were half-chances, at best.

There are other options to explore. Can Aaronson play in the midfield with McKennie? This replicates the role that Aaronson plays at Salzburg. There is also the pending return of Gio Reyna as well, and he could slide into the attacking midfield as well. Then there are the traditional backup players such as Lletget, Roldan, and de la Torre.

The midfielders are all talented and have qualities but exploring combinations that not just help with possession but help with creation seems to be a worthwhile task.

The U.S. team seemed to play into Canada’s hands in this game. The U.S. team completed over twice as many passes as Canada (438-210). The passing inside the opposing half was even more lopsided in favor of the U.S. team with 233-78.

Canada didn’t seem to mind. Head coach John Herdman trusted his team’s defense and knew he had superior forwards in Jonathan David and Cyle Larin where it only needed a few chances to score. 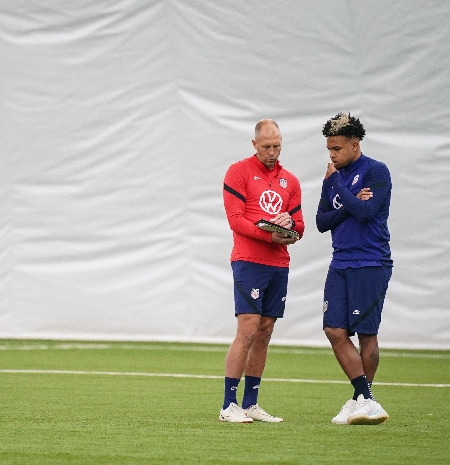 Who cares about possession dominance when they (Canada) are playing for the counter attack all day,” Murray said. “We were out coached today. I would also add that the like for like subs were not the answer. Should’ve gone to a back three - pushing Robinson inside and bringing another player into the center of the park higher up the field. The players need to understand that it’s win or bust in the approach. That’s not what the head coach was talking about after the game.”

Regarding the substitution approach, Murray seems to be correct. The team’s approach wasn’t working and chances were minimal. Canada had the U.S. team figured out and a different look could have tested Canada. Instead, a like for like substitution pattern allowed Canada to keep up with its same, effective defensive plan.

Canada deserves to be at the top of the Octagon right now and the reason why is that they are very well coached, and the players all understand and believe in each other. When I was watching them, it reminded me of the U.S. national team under the first cycle of Bruce Arena in 2002 or the Bob Bradley-coached cycle in 2010. This team has no problems punching above their weight and they find goals despite being at a possession disadvantage.

Looking ahead to Honduras

This game is now massively critical. Yes, Honduras is dead last in the Octagon – without a win and sitting on just three points from 10 games. But upsets happen and this cannot be taken lightly.

The U.S. team has to win this - and it would also help massively if Mexico can pound Panama. The U.S. team has just a one-point lead on fourth-place Panama. If the U.S. falls into fourth, it would be in the relegation playoff position.

The minute the draw was announced, what stood out was the difficulty of the final window with away games against Mexico and Canada along with a home game against a Panama team that is playing very good soccer right now. 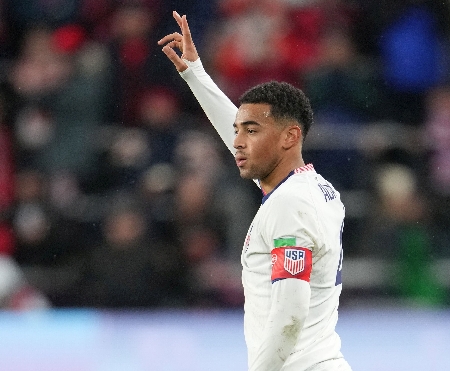 It is going to be very close if the U.S. team heads into the final window with a lead of fewer than four points on a qualifying spot. If it is four points, it becomes all about winning that second game in March against Panama.

Right now, a U.S. win over Honduras and a Mexico win over Panama would give the U.S. team a four-point cushion. But if either of those don’t happen, it is going to be very tight.

In this game on Wednesday, Berhalter will probably stick with the staples of McKennie, Adams, A. Robinson, Dest, Pulisic. Weah will likely return to the starting lineup. The interesting decisions will come in who completes the midfield? Who starts up top? Who is in central defense?

And while this has been stated many times, the U.S. team’s attacking set pieces have been woefully ineffective during the entire Octagon. There are many reasons for this, but one is that Pulisic’s deliveries have not been good.

Matt Turner: His poor goal kick gave rise to Canada’s attack up the middle. The worst part wasn’t the kick but rather that he took it before his fullbacks moved up the field. It gave Canada numbers in the midfield to start their rush. Aside from that, Turner was okay but it was a tough moment. Rating: 4.5

Antonee Robinson: Was one of many players caught a bit flat-footed on Canada’s opening goal. His final ball let him down for most of the day. Rating: 4.5

Miles Robinson: Tough day at the office for Robinson who had a hand in both goals, albeit his missed tackle on the second goal was when he was covering a lot of space due to Richards being out injured, with his team down to 10 players, and trying to press. Still, this was not his day. Rating: 4.0

Chris Richards: He could have done better on the first goal, and his absence was felt on the second goal. Still, it wasn’t that strong of a performance. Rating: 4.5

Sergino Dest: Did a decent job defending Tajon Buchanan, which was one of the team’s top priorities. Dest didn’t get forward that much and he had a turnover in the 71st minute which gave Canada a chance. Rating: 5.5

Tyler Adams: Did his part against a physically strong Canada team that was gunning for counter attacks. Rating: 6.0

Weston McKennie: The Juventus midfielder should have done better with his 43rd minute header off a corner and he also committed five fouls to interrupt the flow of the game. He lost a lot of his 50/50 balls on top of the fouls. Still, he was aggressive with his dribbling (probably the best on the team) and his passing from distance is an asset. Rating: 5.5

Yunus Musah: the Valencia midfielder was on the ball enough but his offensive bite was lacking and he wasn’t part of anything too dangerous. Rating: 5.0

Christian Pulisic: The Chelsea winger had three shots, although none were dangerous. His set piece deliveries were also not improved from the El Salvador game. He did draw a lot of attention to Canadian defenders who looked to foul him once he looked threatening. His dribbling never really opened up anything and his winning of 50/50 balls was also poor for a second straight game. In this one he was 3/13. Rating: 4.5

Brenden Aaronson: Aaronson brought energy in this game and what little offense the U.S. team created, seemed to come from him as he set up each of Pulisic’s three shots. He also won a majority of his duels (7/13), was more effective in his dribbling, pressed, and was also 3/3 in his tackling. Rating: 5.5

Gyasi Zardes: The Columbus Crew midfielder struggled on the smaller field where the defense was immediately collapsing around him. Part of his struggles were on a lack of service, but part of it was also on him. He had some good hold-up plays but couldn’t help generate anything near the goal. Rating: 4.0

Ricardo Pepi: He brought some energy to the U.S. team’s attack but skied a half-chance late. Rating: 5.0

Kellyn Acosta: Acosta was decent but didn’t really elevate the U.S. team’s midfield other than once nice long-looping ball into the box which created a half-chance from close-range. Rating: 5.5

Jordan Morris: The Seattle Sounder was aggressive with his runs but could never find the open space he craves against a deep-lying Canadian defense. Rating: 5.0

Paul Arriola: The new FC Dallas winger probably should have come into the game sooner and he was one of the more aggressive U.S. attackers the final 15 minutes of the game. He nearly had an equalizer with an acrobatic bicycle kick that would have been a goal for the ages. Rating: 6.0

Reggie Cannon: Came in late for Dest but didn’t really help the team push forward when offense was needed. Rating: 5.0