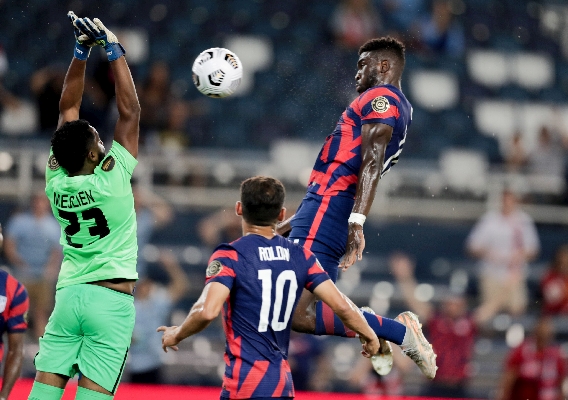 Analysis: USMNT cruises past Martinique 6-1 to set up Canada test

It's never wise to draw too many conclusions in a blowout against a minnow, but it's fair to say the U.S. team did what it should have done in a 6-1 win over Martinique. The U.S. team certainly has areas where it should improve, but it at least has positive momentum heading into Sunday's game against Canada.
BY Brian Sciaretta Posted
July 16, 2021
1:10 AM

THE UNITED STATES national team routed Martinique 6-1 on Thursday night to formally secure a spot in the quarterfinals of the Gold Cup and set up a scenario for Sunday’s game against Canada where it has to win to secure first in Group B.

As Gregg Berhalter said afterward: ““We’re not jumping to conclusions on anyone based on tonight” – which is completely fair when playing a minnow. But overall, it was a good performance. The U.S. team played the way it should against a minnow and did not play down to the level of its opponent.

Instead, the U.S. team scored early and kept up the pressure throughout the game. If not for a Kellyn Acosta mistake to cough up a penalty and a good number of high-quality saves from Martinique goalkeeper Gilles Meslien, the margin would have likely been eight goals, or more.

The U.S. began the game with a heavily rotated squad and in a different formation with three central defenders, two wingbacks, four midfielders, and Daryl Dike alone at top. Matthew Hoppe, made his U.S. national team debut and played in a free-ranging midfield role. James Sands, Eryk Williamson and George Bello made their first starts for the U.S. team and Bello became cap-tied.

Overall, it worked. Dike scored early with a header on an assist from Hoppe. Then it was Hoppe, Busio, and Dike combining for a play that resulted in an own goal. In the second half, Miles Robinson scored the third goal off a cross from Williamson. Daryl Dike then added his second on a pass from Cristian Roldan. After Martinique scored on a penalty off a mistake from Kellyn Acosta, the U.S. team scored twice more. Roldan found Gyasi Zardes on a quality goal for the fifth goal. Nicholas Gioacchini completed the scoring when he slammed home a pass from Gianluca Busio.

Without trying to draw too many conclusions in a lopsided game, here are some thoughts. 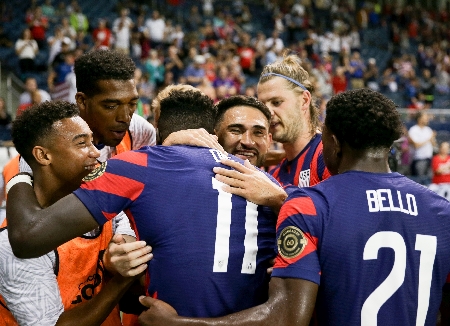 For this team, the three central defender formation with two wingbacks seems to make the most sense – especially with Paul Arriola injured. The winger options just aren’t there and Berhalter has opened himself to criticism by not selecting more in-form wingers, even on the domestic front. Leaving off Chris Mueller and Kevin Paredes stand out. Most of the options on the team only play wing as second positions – Gioacchini, Hoppe, Moore, Busio, Lletget, Roldan, etc.

The way to get beyond the lack of wingers is to use three central defenders and allow the fullbacks to push-up further with the defensive cover. 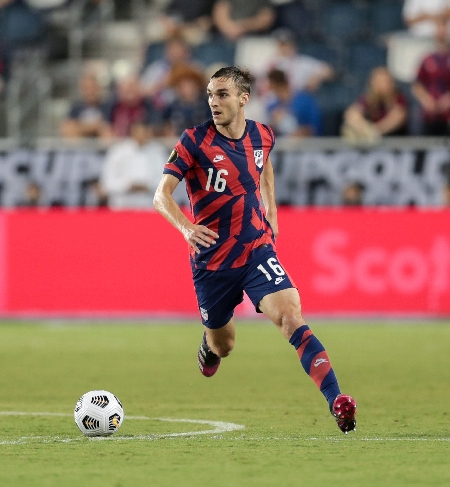 Last night Berhalter rolled with that approach, and it worked. It probably should be considered as the best approach with this particular roster. While Moore and Bello weren’t the most involved players in the attack, Martinique spent a lot of energy defending them and it opened up the game for the U.S. team to attack the middle.

James Sands had a very important performance in that regard. He showed a lot of confidence and any mistakes he might have made were extremely minor.

Matthew Hoppe, 19, was very confident in his USMNT debut and had a nice debut over his 58 minutes on the field. It is even more impressive given that he’s in preseason form. He had a backheel to set up Buiso’s shot off the crossbar (which eventually led to the own goal), he had a nutmeg in an open-field move, and he assisted on the first goal.

Dike from Hoppe. The #USMNT is off to a strong start pic.twitter.com/SdudISPCCo

Unfortunately, his minutes are probably going to be a little limited due to preseason form but he’s made a nice impression and his confidence and swagger are refreshing and fun.

The three best players in the game were Daryl Dike, Gianluca Busio and Christian Roldan and all three made cases to start against Canada and then in the knockouts.

Dike, 21, had some poor touches here and there but was simply too much of a handful to contain. When you add Walker Zimmerman in the box with Dike, defending the U.S. team on set pieces is very difficult. Dike isn’t just a good player, he’s also a lot of fun and his enthusiasm seems to have a positive effect on the entire team. You can see why he’s going to be sold for a lot of money because he’s not just a big target forward, he also moves very well. 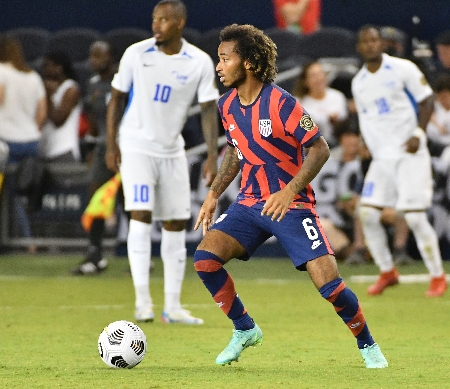 Busio, 19, did what the was needed in that he got on the ball over 101 times and that was more than the other two U.S midfielders combined in Williamson (51) or Roldan (45). Busio was asked to keep possession and push the pace. The U.S. team was too slow against Haiti but against Martinique, they were much livelier and Busio was a big part of that.

Roldan also was very important in getting the ball into dangerous positions. He assisted on Robinson’s goal and, if not for a deflection, he assisted on Zardes’ goal. In total, he was 28/32 in passing with almost all of his passes coming in the attacking half. He completed 3 out of 4 long balls and had four key passes.

The game against Martinique was not without mistakes. The U.S. team needs to be better against Canada and the better teams in the region. 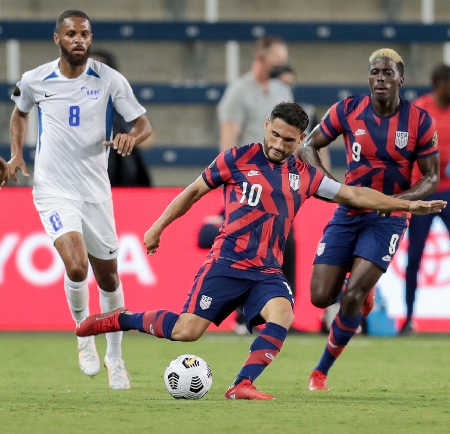 For one, the fullbacks need to get more involved. Bello only had 40 touches and Moore was even lower at 31. If the U.S. team is going to push the fullbacks further up the field by having three central defenders, it needs to use them to bring more width. Instead, they didn’t have much influence on this game.

Second, duel winning in the midfield wasn’t great. When a team dominates possession, it’s generally not a big deal. But Roldan won 1/8 of his duels, Busio won just 2/9 of his duels, and Williamson was the best of the trio but he won just 4/13 of his. It wasn’t necessarily important as the U.S. players typically quickly won possession back, but those numbers will have to be better against better teams.

The Canada game is the U.S. team’s first time facing a team this tournament that will be involved in the final round of CONCACAF World Cup qualifying. Due to goal differential, the U.S. team is in a position where it will have to win to finish first in its group.

For players like Matthew Hoppe, starting again on a few days rest is asking a lot given his preseason form. If Reggie Cannon is healthy, that will surely send Shaq Moore to the bench as he is also in preseason form (Acosta might shift to right back, although that is a distant second position for him). Meanwhile, Sebastian Lletget will likely return to the starting lineup. 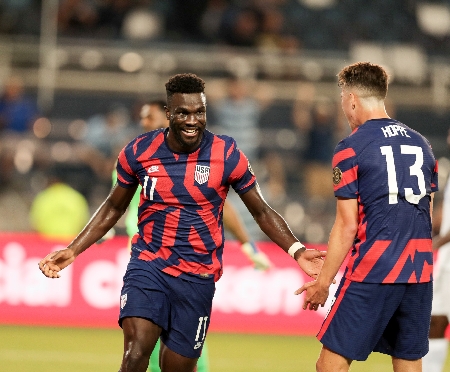 Berhalter has a lot of important questions. Who will be the team’s starting midfielders? Lletget is one but it remains to be seen if Acosta is needed at fullback to rest Moore. Also, did Busio and/Williamson build a case to replace Jackson Yueill?

Up top, Daryl Dike played well against Martinique but Gyasi Zardes was also good off the bench. That will probably be a toss-up.

Finally, the biggest question will come down to formation. Berhalter has tended to prefer the 4-3-3 but if he isn’t comfortable with his wingers, a similar variation of a 3-5-2 could be used. 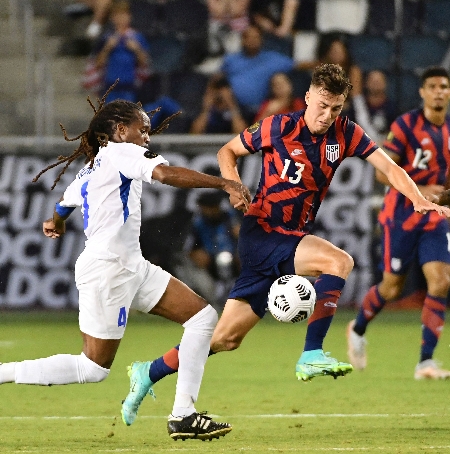 Matt Turner: Made a few nice saves and had no shot on the penalty. Rating: 6.0

Miles Robinson: Was calm and handled himself well, while adding a goal. Rating: 7.0

Walker Zimmerman: A solid performance from the captain and his distribution was solid along with his offensive aerial ability. Rating: 7.0

Shaq Moore: Physically tired from his start  against Haiti and in preseason form, Moore didn’t have much of an impact on this game: Rating: 5.5

George Bello: The Atlanta United left back showed some moments of quality but didn’t influence the game much. Rating: 5.5

Eryk Williamson: The Portland Timbers midfielder tried to push the pace of the game. Aside from a few turnovers, it generally worked. He was a part of a bunch of linkups. Rating: 6.5

Gianluca Busio: The young Sporting KC midfielder was always on the ball with 101 touches and a lot of progressive passing. His duel-winning wasn’t great but Busio was a huge net positive in this game. Rating: 7.0

Cristian Roldan: The Seattle Sounder midfielder had a good game with a string of important passes that created goals and chances. Rating: 7.0

Matthew Hoppe: It was a good and lively debut for Hoppe who was very dangerous throughout his 58 minutes, while also notching an assist. Rating: 7.0

Daryl Dike: The Orlando City forward was the MOTM in this game with two goals, nearly a third which was instead an own goal, and movement that opened the game up for others. He was simply too much for teams to defend. Rating: 8.0

Nicholas Gioacchini: The SM Caen attacker had a tough time as Meslien seemed to be there to make big saves on Gioacchini. But Gioacchini worked hard and got his deserved goal to complete the scoring. Rating: 6.5

Kellyn Acosta: It’s a bit unfair as Acosta was playing out of position at right back, but a player of his quality shouldn’t make the mistake he did to concede a penalty – which ended up costing the U.S. team the opportunity to move to the top of the group. Rating: 4.5

Gyasi Zardes: Zardes came in and adequately replaced Dike to keep up the pressure. His goal was well-taken. Rating: 7.0

Jackson Yueill: The San Jose midfielder came into the game late but didn’t offer much. Rating: 5.0

Donovan Pines: The DC United defender came into the game for his USMNT debut and but didn’t have much to do as the U.S. team was pushing forward for more goals. Rating: NA