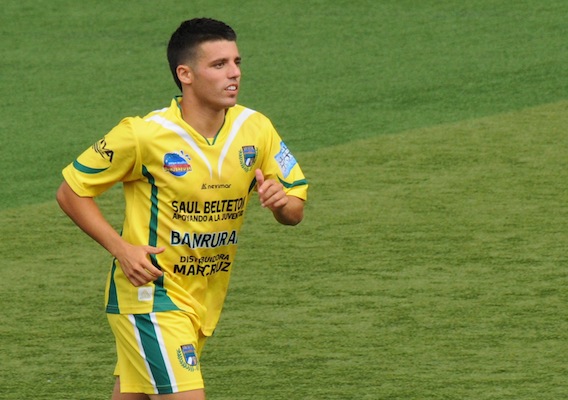 The one-time American U-20 attacker was a can't-miss prospect who missed. Now, he finds himself far from his home in New Jersey, playing in Guatemala, and searching for a second chance.
BY Brent Latham Posted
October 05, 2012
9:30 AM

Is there life after—or before—MLS for an American player? More and more players know that the answer is yes.

America’s league is oversubscribed. With limited roster space and budgets, plenty of talent, and guys like Thierry Henry and David Beckham wanting in, it’s a no-brainer and in fact a necessity for many young American players to look elsewhere.

Where to turn next, though, is several degrees more complex. But there are leagues out there that will be glad to give a skilled American player a chance. One of them is in Guatemala.

After a few years down here getting to know the teams and players, I found that there are openings for American talent. And every so often in the U.S., you find a player willing to, out of curiosity or necessity, test himself in some alternative—let’s just say different—conditions.

That was the case with Vincenzo Bernardo, a one-time American U-20 prospect in the youth ranks of Napoli in Serie A, who has had some trouble finding the right fit since leaving Italy.

Undersized but skilled on the ball, technically outstanding, and tactically sound, I thought Vincenzo could fit in somewhere in Guatemala. It was a stretch to think a top division club—teams usually looking for veteran goal scorers or hulking center backs for their limited foreigner spots—would take a risk on an unproven American. But the second division proved full of teams interested in a player of his pedigree.

After trials around the country, we found Vincenzo a good fit at a club in a town of about 20,000 called Guastatoya. Thus was born the Jersey Goal Project, a series of short webisodes documenting the exploits of the young American through the rigors of a season in Guatemala’s second flight, as told by him and me, the person who put him up to all this. Call me an agent if you like, just don’t accuse me of making any money off Vincenzo. I see myself as more of a facilitator and a journalist interested in telling the story of what goes on in a land about which people never stop asking me questions.

Here, Vincenzo faces playing conditions a notch or three less professional than he’s used to, fields that are usually not up to par, referees with a grudge against foreigners, and crowds with worse. We record his actions, and the reactions of the people to him, as Club Deportivo Guastatoya fights to move up to the top level, or maybe just to avoid relegation to the third flight.

What results is some pretty interesting insight into the life of a professional soccer player just trying to make his way, any way possible. The program also sheds some light on what it means to be a pro in places in the world like Guatemala, an entirely different ball game than what you might find in a country like the U.S.—but no less real, relevant, or important to the global game.

Finally, the show is about Vincenzo, maybe not so much the player as the stereotype. In the U.S. we love to heap expectations on our young prospects, and we seem to love to tear them down just as soon as they prove not to be the next Messi by the age of 21.

The target of all that internet-inspired angst is always a real person, with the same hopes, dreams, and frailties as all of us, but some exceptional soccer talent we all might wish we had had as well.

Here’s what that player is willing to do instead of giving up on the dream. Hate it or love it, this is the world’s game in a world in which you don’t live, through the eyes of someone that could easily have grown up next door to you.

This is real soccer. This is the Jersey Goal Project.

Brent Latham is a writer and commentator for ESPN.com and other outlets. He lives in Guatemala.