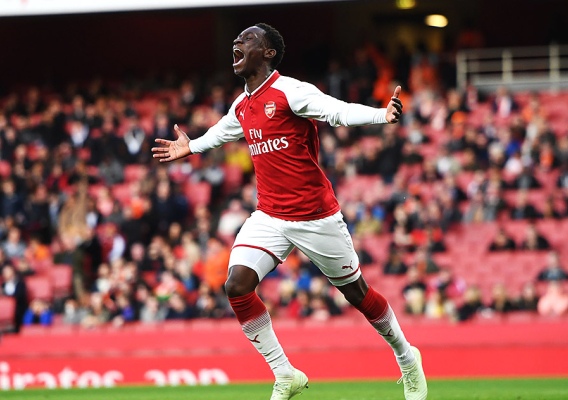 Amon and Novakovich score, Weah starts, Balogun to the U-18s, and more

What an interesting weekend it was for Americans abroad as Jonathan Amon, Kevin Lankford, and Andrija Novakovich scored impressive goals. The U.S. U-18s added a coveted prospect while Matt Miazga earned his first start for Nantes. Brian Sciaretta breaks it down
BY Brian Sciaretta Posted
August 20, 2018
3:00 AM
IT WAS a busy weekend for Americans abroad a teenager started for one of the best teams in the world, a top prospect will show up for the U.S. U-18 team, a U-20 players scored in Denmark, a USMNT player made his Ligue 1 debut, and another scored in the Eredivisie.


For the second straight game, United States U-20 winger Jonathan Amon scored for FC Nordsjaelland. Unlike Thursday’s goal which was a tap-in at the end of a loss which saw his club eliminated from Europa League qualifying, Sunday’s goal was far more impressive and came during a winning effort.

Amon, 19, came on at halftime for Nordsjaelland with his club up 1-0 over Vejle Boldklub in a Danish Superliga matchup. In the 90th minute, he took a long ball to beat his defender and score a valuable insurance goal as part of a 2-0 win.

The goal showed Amon’s great speed and skill in the open field. Yes, he was greedy and ignored a wide open forward on the play but greed is not necessarily a bad trait for a young attacker.

If he continues to play this well, an October or November U.S. national team debut seems likely.

Balogun called up to U-18s


Back in April, ASN was the first to report that Arsenal’s U-18 leading scorer Folarin Balogun, 16, was born in the United States despite not being listed as American on the club’s website.

Since then, there has been a several interesting developments regarding Balogun. Earlier in the summer, Balogun was called up to England’s U-17 team where he played in the European U-17 championships.

But over the weekend Balogun announced on his Instagram page that he was going to play for the United States U-18 team at an upcoming camp in the Czech Republic.

Now, to play for the United States in an official youth competition Balogun would need to file a permanent one-time switch with FIFA. Even without filing the one-time switch, Balogun can play in friendlies for the United States youth national teams (earlier this year Nebiyou Perry played for the U.S. U-20 team in friendlies despite not filing a switch after playing for Sweden’s U-19 team in an official competition).

While still very young, Balogun is high-level prospect and is also a powerful center-forward – a position that his thin across U.S. youth teams. At this point, it seems unlikely that Balogun will be filing for a switch to play for the United States anytime soon and is probably attending this camp to observe U.S. Soccer’s set up. Still, it is a very positive development for U.S. Soccer.

The fact that U.S. U-20 head coach and youth technical director Tab Ramos is running this camp helps the case for the United States. If Ramos likes what he sees from Balogun, he can speak with high-level authority over how he fits into the big picture for U.S. youth national teams. Ramos can perhaps move him up to the U-20 level quickly if he sees fit. That could put Balogun in line to file a one-time switch sooner than later.

While Sittard lost the game 2-1, it was an important goal for Novakovich because it showed continued progression and his ability to handle the transition from the second tier of Dutch soccer to the Eredivisie.

On the play, Novakovich showed nice composure in the box and the ability to beat defenders. If Novakovich is called up to the upcoming friendlies for the United States, he will certainly be riding a wave of momentum.


It was expected that Matt Miazga was going to make his debut for Nantes on Saturday against Dijon after the club loaned out central defender Koffi Djidji to Torino.

Nantes had an overall poor game against Dijon and lost on the road by a 2-0 scoreline. No one really played well and Miazga could have done better on the second goal – even if he was not completely at fault. Still, when the game opened up, Julio Tavares was able to beat Miazga on the low cross for an easy finish.

The good news is that Miazga will probably continue to start. He is still new to the club and will undoubtedly improve as he gets more comfortable. But this play is a reminder that the game in Ligue 1 can be very faster – far faster than the Eredivisie where Miazga spent the last two years.


On Saturday morning, it was a very surprising development for American fans that Timothy Weah, 18, was starting for Paris St. Germain against Guingamp. It was certainly a nice reward for the American after his hustle resulted in a goal in the Ligue 1 opener last weekend.

But starting was not expected and Weah got to play alongside Di Maria and Neymar – which is an unbelievable experience.

Weah only played the first half and left with PSG down 1-0. He had a few nice moments but was overall quiet. But playing at a club like PSG means that there is talent everywhere. Weah was replaced at halftime by one of the best players in the world in Kylian Mbappe who scored two goals and helped PSG to a 3-1 win.

Weah will certainly learn from the game about what he has done well to get to this point, and what he can do better. Playing with world-class players will certainly help him this year and help continue his development – which is on a very impressive track.


Keven Lankford, 19, is an American flying somewhat under the radar but he has had some nice moments so far for FC Heidenheim of the 2.Bundesliga. Last season he mad 14 league appearances for 546 minutes (and five starts) and so far this season he has played in two games with one start.

On Sunday, the German-American scored his first professional goal against fourth-tier Jeddeloh when he came off the bench and netted the final goal of a 5-2 win.

At his age, Lankford remains one to watch for the United States Olympic team but first he has to continue to be an impact player for Heidenheim so that he can be a regular starter.

Notes from around Europe

Antonee Robinson went the distance for Wigan in a 2-2 draw with Nottingham forest.

Erik Palmer-Brown remained as an unused substitute for NAC Breda.

Kenny Saief was still unable to play for Anderlecht despite news from earlier in the week he was near a return.