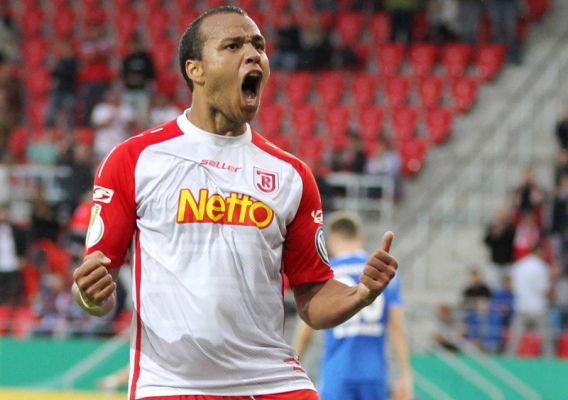 Amon and George hit goalazos, Miazga and Saief build towards next year

It was another productive weekend for Americans abroad, but it came from players outside of the national team. Jonathan Amon and Jann George hit goalzos, Romain Gall hit a brace, and Palmer-Brown went the distance for Kortrijk to highlight the past three days.
BY Brian Sciaretta Posted
April 30, 2018
5:00 AM
THE WEEKEND ABROAD was certainly very interesting the past few days as the top stories didn’t involve the typical mainstays like Christina Pulisic, Weston McKennie, or DeAndre Yedlin. While those players saw minutes, the spotlight was grabbed by other players.


For the second straight week, FC Nordsjaelland took on Danish leaders Brondby. Last weekend, FC Nordsjaelland lost to Brondby but U.S. U-20 winger Jonathan Amon made his return from injury off the bench and was dangerous throughout.

On Sunday, Amon earned the start for Nordsjaelland and scored the opening goal of the game on terrific break after a Brondby turnover. On the play, Amon showed great speed and impressive finishing as the defense tried to close down.

It was the Charleston native’s second career professional goal. Unfortunately, however, Amon conceded a penalty in the second half and was subbed out of the game in the 71st minute. Brondby ended up winning 4-1.

Amon, 18, is a very exciting prospect. As a winger, he plays a position where there hasn’t been much American success lately. His game does need improvement in some areas but it will be exciting to see how he does with the U.S. U-20 team and the U-23 team in the years ahead. The full national team probably awaits in he can continue his success in Denmark into next season.


Another American who scored a remarkable goal was Jahn Regensburg attacker Jann George who is on fire lately in the 2.Bundesliga with three goals and an assist in his last three games. His goal against Duisburg in the 58th minute on Saturday evened the score at 1-1. Unfortunately for George, Duisburg pulled away and won 4-1.

The goal, however, was the best play of the game.

The loss, however, was brutal as it essentially ended Jahn Regensburg’s attempt at promotion into the Bundesliga. The club was only promoted from the 3.liga last year and a second consecutive promotion was widely unexpected.

George, 25, now has seven goals and three assists on the year. The German-American has just one involvement with U.S. national teams – a 2011 U-23 call-up – in his career. Talent has never been a question with George but he has had trouble in the past getting along with coaches. Now mature, he is finally putting it all together.


On Friday, Tim Ream and Fulham continued their remarkable push towards promotion with a come-from-behind 2-1 win over Sunderland. It was a tough game for Fulham against the relegation-bound Sunderland but ironically it was Sunderland which was the last team to beat the Cottagers on December 17. Since then, Fulham has gone on a 23 match unbeaten run.

Fulham is in a desperate hunt to finish in the top two and secure automatic promotion. It currently sits in third. To hold onto second, Fulham needed Hull City to earn a result against Cardiff City but Cardiff won 2-0 to remain in second.

For Fulham to earn an automatic promotion, it will have to overtake Cardiff City this weekend in the final game of the season. Fulham visits Birmingham City while Cardiff hosts Reading. If that does not happen, Fulham will be the top seed in the promotional playoff.

Gall earns a brace in Sweden


French-born Romain Gall, 23, is having the best run of his professional career in 2018 with GIF Sundsvall of Sweden’s top flight.

On Sunday, former U.S. U-20 attacker scored two goals in a 2-1 win over Elfsborg. With the win, Sundsvall moved into sixth place in the Allsvenskan.

Across all competitions in 2018 (the Allsvenskan along with the Swedish Cup), Gall has scored five goals and two assists.

This has been a nice breakthrough for Gall who has struggled until this point with his career. He was one of the final players cut from the 2017 U.S. U-20 World Cup team after participating in World Cup qualifying earlier that year. He attempted to breakthrough with the Columbus Crew but was unsuccessful and spent most of the time on loan with the Austin Aztex.

In 2016, Gall was in Sweden’s third tier with Nyköpings BIS where he scored nine goals in 24 goals and in 2017 he signed with GIF Sundsvall. Finally in 2018, he is breaking through and scoring at an impressive rate to start the season.


Right now we know Christian Pulisic and Weston McKennie are likely to be in the Champions League next year (provided neither transfer).

Kenny Saief, 24, is on loan at Anderlecht from Gent but there is an option to buy in the loan which will likely be exercised. Since joining the club in January, he has been a consistent starter and has helped the club push into second place.

On Saturday, Anderlecht downed Sporting Charleroi 3-1 and Saief played 83 minutes. With the win, Anderlecht maintained its hold on second place and is five points behind leaders Club Brugge and two points ahead of third-place Standard Liege.

In Belgium, the champion advances straight to the group stages of the Champions League but the runner up enters the tournament in the qualifying rounds. With four games remaining, Anderlecht is in the driver’s seat for a spot in qualifying.


After spending last year mostly on the bench for Sporting Kansas City after a U-20 World Cup where he was one of the tournament’s best central defenders, Erik Palmer-Brown is starting to get minutes on loan at Kortrijk in Belgium from Manchester City.

Palmer-Brown, 21, went the distance in Kortrijk’s 2-1 win over Lierse. The club is currently in the Europa League playoff table and needs to win its group to have a chance for the Europa League. It currently is in second place with four games remaining and trails Zulte-Waregem by four points.

Those two teams will meet on Saturday and Kortrijk will need to win to have a realistic shot at the Europa League.


If there was any one American player that needed a goal, it was Bobby Wood. The Hawaiian has had a brutal season with Hamburg and entering into the weekend, he had scored just one Bundesliga goal.

Fortunately for Wood, 24, he answered the call when Hamburg was awarded a penalty against Wolfsburg. His goal gave HSV a 1-0 lead and paved the way for a 3-1 win.

Hamburg has now won two games in a row and is looking to make an unfathomable escape when relegation looked like a certainty. Hamburg is still two points from simply making the relegation playoff but that spot is held by Wolfsburg, which is a sinking ship.

Meanwhile, John Brooks was an unused substitute for Wolfsburg after his disastrous return from injury last week – when he was substituted out of the game in the first half. After setting a record for the highest ever transfer price for an American player, Brooks has had a lost season after dealing with injuries and poor play.

It has been a rough season for Wood too and converting a penalty won’t necessarily change that. If it does give him confidence for the two remaining games, then it could be a huge turning point.


With just one game remaining in the regular season for the Eredivisie, Vitesse is scoring goals in droves. On Saturday it defeated Twente 5-0 and now has scored 15 goals in its last three games. Following Saturday’s finale against Willem II, Vitesse will play in the Europa League playoff.

Miazga, 22, continues to be a mainstay for Vitesse although the playoffs will most likely be the end of the line for Maizga at the club. Currently signed for Chelsea, Miazga is finishing his second season-long loan at Vitesse and the likelihood for a third year is small because Miazga has simply done all he can do at the club.

What is the future for Miazga? A likely scenario is that he reports to preseason this summer with Chelsea and perhaps plays in a few friendlies with an eye for another loan. With a Polish passport, all of Europe is open for him and with 54 Eredivisie games under his belt, he has certainly been scouted by numerous clubs and seems due for a step into a top league.

A loan, however, will probably have tough negotiations regarding issues such as options to buy and/or sell-on clauses. At Vitesse, Miazga had no option to buy as part of his loan. A club in the Bundesliga or any other top league will likely demand one. Will Chelsea give in or ask for a sell-on percentage if they do?

The good news is that Miazga has performed well enough on his loans that he has set himself up for a bright future as opposed to being tossed into the bargain bin of failed signings.


The American mainstays in Europe all were in action, as expected. Christian Pulisic started for Borrussia Dortmund in a lackluster 1-1 draw against Werder Bremen and Weston McKennie came off the bench in the 64th minute in a pedestrian 1-1 draw against Borussia Monchengladbach. Both players are in great shape to be part of the Champions League next season with Schalke still in second and Dortmund holding third in the Bundesliga.

DeAndre Yedlin will probably want to forget Newcastle’s 1-0 loss at home to last place West Brom. Newcastle has hit the point where it is in no danger of relegation and has no hope of earning a spot in Europe.