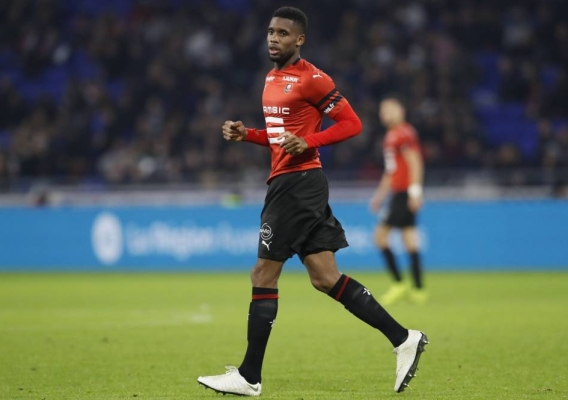 Born in the United States, Jordan Siebatcheu's international representation has always been interesting for American fans. The tall forward has won silverware in his career and guided two teams to promotion. Now he is attempting to play a bigger role for a surging Rennes team. ASN's Brian Sciaretta recently spoke with the DC-born striker
BY Brian Sciaretta Posted
January 16, 2020
2:00 AM
AS A YOUNG soccer player, Jordan Siebatcheu has had his ups and downs early in his career while at times showing a very high ceiling. As a tall and powerful center forward, he currently finds himself at an important period in his career where he will look to return to being the impact player he can be for a Rennes team aiming for a Champions League birth next season.

Having developed as a young player with Reims, he put up terrific numbers with the club’s first team. After a lone Ligue 1 appearance in the 2014/15 season, he began to play more regularly for Reims in 2015/16 at the age of 19. It was that year when he scored three goals in 830 minutes/ 25 appearances for the club (mostly as a substitute). Following that season, Reims was relegated to Ligue 2.

But then his career began to take off. A loan to Châteauroux in the third tier saw Siebtacheu play a big role in the club finishing first and earning promotion. In just 15 appearances and 1275 minutes, he scored 10 goals. He returned to Reims for the 2017/18 season Ligue 2 and scored 17 goals as Reims finished first to win promotion back to the top flight. Siebatcheu ended up tied with the second most goals in Ligue 2 that season.

But Siebatcheu,23, did not stick around with Reims for their first season back in Ligue 1. Instead he was sold to Rennes for a fee just north of $10 million. But his first season with Rennes was met with two thigh injuries which saw him miss time and limited him to just 600 minutes in Ligue 1 where he scored three goals. But he also managed to score three more goals for the club during Rennes’ run to winning the Coupe de France and another in the Europa League.

The first half of the of 2019/20 season, has seen Siebtacheu’s minutes decline although part of that is due to the strength of a Rennes team that is sitting in third place Ligue 1 and in the mix for a Champions League spot. He has made 15 appearances so far but only three have been starts. But Siebatcheu is feeling confident with how he has been playing in recent weeks and believes he will find his top form again in the coming months.

"Yes, the team is doing well this season,” Siebatcheu told ASN from France. “But I am looking forward to pushing to play more minutes in the second half of the season and to find my best level again."

The international front is also very interesting for Siebatcheu. He was born in Washington, DC but left with his family for France when he was very young. His success with Châteauroux earned him a call-up with France’s U-21 team for a pair of friendlies in the summer of 2017 where he scored against Albania and played against Cameroon, a country which he also holds citizenship.

But in 2018, he reveals that he was approached by the U.S. federation about the possibility of playing for the U.S. national team which was coached by Dave Sarachan at the time. But with this coming at a time when he just sealed his expensive transfer to Rennes, he felt it was best to concentrate on his club career.

But now with him having settled with the club and at a more mature stage of his career, the feels the situation is different.

"I was proud to be in consideration for the U.S. team and that they wanted me to come,” Siebatcheu said. “At the time I was a very young professional and I wanted to stay with my club to secure my place in the starting eleven. That was my priority at that time. I was called up by France's U-21 team before but I was living in France. It was nice to play for them but at this moment in time, if the U.S. called me up again, I would be proud and it would likely be different.... maybe it would be a good time now. "

“It's always nice to see that people are following you and that the national team liked your profile,” he added. “It's a big team.”

Beyond the national team, Siebatcheu is also looking to make an important trip to the United States as soon as this summer as he still has family living stateside although he has never returned since he left as a young child.

"I have family still in the United States and they have lived there ever since I was born there,” Siebatcheu said. “I left when I was one and I haven't had the chance to go back. But they love living there and I am planning a trip to go back - maybe after this season."

For now, there is a lot to enjoy for Siebatcheu at this stage of his career. He is pushing for more minutes but is doing so with one of the best teams in France. He is fit and is happy with how he is playing and training. He has won a lot so far in his career – he has guided two teams to promotion and won a Coupe de France. Should he do well, there is a lot more on the horizon, including the UEFA Champions League.