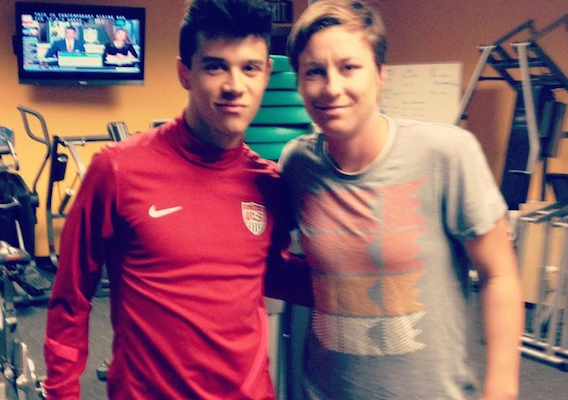 The young United States men's national team player runs into the female star at the gym, of course; Nick Rimando does some 'splaining to his kid and Geoff Cameron cooks dinner.
BY Jesse Yomtov Posted
January 26, 2013
6:54 AM
10. Herculez Gomez—Scrumptious

I have just as many Tour De France wins as Lance Armstrong.

So good they named it twice!! Little couscous and chick peas!!! twitter.com/GeoffCameron/s…

Everyone please welcome our 2 new signings that came in a package deal with Jamison Olave... #hiscalves#theyscareme twitter.com/DaxMcCarty11/s…

6. Stuart Holden—This is one of those times you cringe on someone else’s behalf:

It's your boyyyy stu, I'm numbaa 22, what ya gonna doooo , bust a rhyme or two coz im so coool heyyyyyy ... Sick right? No? Ok nevermind

5. Nick Rimando—Benny is all of three years old

I was just told my daughter Benny said "boys have nuts and girls have diamonds" hilarious. Chalk that one up.

4. A.J. DeLaGarza-—You love to see the keeper take care of his back line

Chauffeur to practice this morning. Thanks @sjohn25 twitter.com/AJD_20/status/…

@clint_dempsey Score one important goal and now you wanna start tweeting again!!?? Haha what up man