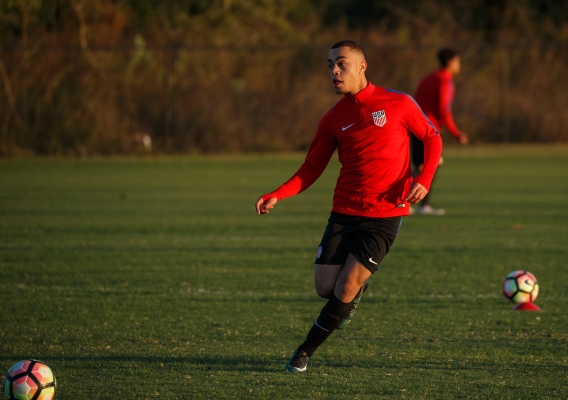 While he has only played one game with the U.S. U-20 team at the CONCACAF Championships, Ajax right back Sergino Dest believes this team has the potential to be special. ASN's Brian Sciaretta caught up with Dest from Florida.
BY Brian Sciaretta Posted
November 18, 2018
5:00 PM
WHEN TAB RAMOS made three changes to his U-20 team for the CONCACAF Championships, he brought in impressive firepower from Europe that bolstered needed areas. One of the three players added was Ajax right back Sergino Dest, who was a late addition to the starting lineup but was very effective in a 4-win over Costa Rica which qualified the team for the 2019 U-20 World Cup in Poland.

The United States is impressing at the tournament and has made easy work out of every opponent including Trinidad & Tobago and Costa Rica – who were expected to provide somewhat of a test to Ramos’ team.

Dest, 18, got his first taste of U.S. national team soccer last year with the U-17 team where he competed at the World Cup for its qualifying team. He impressed to the point where he was quickly transitioned to the U-20 level this year by Ramos.

Born in Almere-Stad, Netherlands to an American-serviceman, Dest has integrated into the U.S. system well and is convinced that the talent of this generation of American players will perform well at the international level at the years ahead.

“I think we have a great team with great players,” Dest told ASN in Florida. “Not everyone is here like Jonathan Amon and Timothy Weah - who went to the first team. But we have a lot of talent and that the rest of the world should watch out for us in the future. We have a lot of talent coming up. Tab is a great coach and he's just letting us play. He's not yelling much. He just makes everyone confident. He waits for the right moment to tell us where we have to be better and improve. He's making us a better team and better players individually.”

Dest only joined the U-20 team last week as Ajax only agreed to release him for the second stage of the tournament. The integration was difficult at first given that he had to fit into a team that had already been together for over two weeks, plus had to deal with the weather change from Amsterdam to Florida.

For the pivotal Costa Rica game, Dest was not scheduled to be in the starting lineup. A calf injury to Jaylin Lindsey in pregame warmups, however, forced Ramos to put Dest into the game. In the end, Dest played a solid game an shut down Costa Rica on his side of the field.

“It's a little bit different and also, I'm not used to the weather,” Dest said. “We had a scrimmage [last week] and it didn't go that well for me..It's a little bit too hot, to be honest. But I am getting a lot more used to it.”

U.S. defender Chris Richards is also impressed with Dest’s ability to help the U.S. team. On loan at Bayern Munich from FC Dallas, Richards had the opportunity to face Dest and Ajax recently on October 2 in a UEFA Youth League game. Both Americans started and played the entire game which finished 2-2 in Munich.

“Sergino is an amazing defender,” Richards said. “He's just as good of an attacker as well. He gets up and down and has an amazing engine. He gave us trouble in youth league so he's definitely giving defenders trouble here. He'll definitely have a big impact on next year's World Cup.”

While Dest will now prepare for his second youth World Cup for the United States next year, this year has also been a year of transition for him at the club level with Ajax.

Recently he has begun the process of moving from the legendary club’s U-19 team to Jong Ajax, which is its second team. He has also even been playing in a more advanced wing position as opposed to right back. As is typical with some Dutch clubs, positional switches are sometimes done not for a permanent basis but rather to help players in their development to be well-rounded players.

“I think it's going fairly well,” Dest said on playing with Jong Ajax. “I just had a game with the second team and I played really well but I still think I have to be better. [Defensively] I gave the left winger too much space. I have to be shorter on him. On the ball, I did a good job. I am comfortable with the ball.”

“I think right back is just my best position for the future,” he added. “I also like to play wing. Ajax told me that they saw I was really technical. They said they wanted to try me at winger and that I could always go back to right back. They wanted to try it out to improve my speed of play.”

As for when Dest thinks he will get a shot with the Ajax first team, he remains cautious. He has been able to train with them on occasion but insists that it is still a ways off – at least for European competitions. To get to that level, he believes he needs to improve certain areas of his and that is what he is working hard to do.

“I've trained with the first team twice and I played a friendly with them,” Dest said. “We won and I made a good impression. I just have to wait for my chance. I am also still working on a lot of things. It's still a ways off. I have to improve a lot of things to get to that highest level.”

Tonight the U.S. national team will take on Honduras and a win or a draw would give them a spot in Wednesday’s CONCACAF U-20 final against either Mexico or Panama. For Dest, playing against arch-rivals Mexico is something that he has never done, but would relish the opportunity.

“Mexico is our biggest rival and I've never had that opportunity yet internationally,” Dest said. “I've had it with a club when Ajax played Feyenoord but never with my country. I think it's a great experience. Every game is big for your country but that feeling against Mexico, your biggest rival, is just different. You just want to show them that we are the best.”