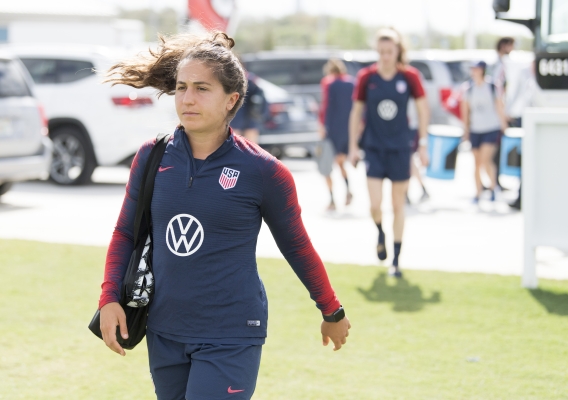 Ahead of Red Stars opener, Colaprico hoping for one more USWNT chance

The past NWSL offseason was a whirlwind for Danielle Colaprico who was clawing her way back into the USWNT picture but suffered an injury prior to the SheBelieves Cup. Now the New Jersey native is hoping a strong start to the season with the Chicago Red Stars can give her one more chance with the national team ahead of this summer's World Cup.
BY John Halloran Posted
April 09, 2019
3:00 AM
FOR THE PAST three off-seasons, winter followed a predictable pattern for Danielle Colaprico. After wrapping up her club duties for the year with the Chicago Red Stars, she’d pack her bags and head to Australia for four months of soccer in the southern hemisphere.

This year, things took a bit of a detour.

After agreeing to go on loan with Sydney FC in the W-League, Colaprico took the long, 20-hour flight across the Pacific. But on the day she arrived, she received an e-mail from U.S. Soccer telling her that she was in the mix for the next United States women’s national team camp in Portugal.

At first, she thought she might be suffering from jet lag and imagining the whole thing, even asking her host family if she was reading the message correctly.

“One of the reasons I went to the W-League for a third time in a row was because I didn’t see myself getting brought back into the mix with the national team,” Colaprico told American Soccer Now.

“I kind of felt bad because I did commit to playing with Sydney in the off-season and that was one of the questions they did ask me, ‘Are you going to be leaving? Do you know?’ At the time, I told them, ‘No, it’s been over a year and a half, I don’t see that happening. It would be a shock if it did.’ And then, of course, it happened,” she added. “I don’t like committing to things and then backing out, so when I had to call my coach and ask to leave, I did feel really bad.”

Luckily, her coach in Australia supported the international call-up and soon after she had arrived in Sydney, she was back on a plane for another trip across the globe.

Colaprico, 25, had been called into the national team before, for a camp in October of 2016. It was the beginning of a new World Cup cycle and head coach Jill Ellis spent time looking at a number of new players.

But despite making the roster for that camp in 2016, Colaprico didn’t earn a cap and then went two years without another chance.

This time around, she was determined to do things differently and resolved to approach camp with a different attitude.

“I just had the mentality, ‘Go out there and do what you do best. Even if you mess up, these coaches brought you in for a reason,” Colaprico explained. “Just show them what you do in the NWSL.”

“I thought I had a really good camp in November,” she added. “Heading to the game in Portugal, I just remember sitting on the bus. In kind of the back of my head, I was thinking that I played really well leading up to this game. This could be it. I could get my first cap. And I never want to get my hopes up, but it was in the back of my head and I just remember sitting on the bus and I could not calm down.”

Against Portugal, she played the second half and earned another cap three days later against Scotland. That led to another call-up in January of this year for matches against France and Spain.

By then, however, the frequent travel—from the United States to Australia, then to Europe, back to Australia for W-League duties, and then back to Europe for the second U.S. camp—had begun to catch up. When Colaprico arrived at camp this January, she just didn’t feel herself.

“I felt a little bit defeated because of the travel,” she said. “It was just a lot—back-to-back [W-League and NWSL] seasons for six seasons in a row and then I was traveling, just the [22-hour] flights. I felt defeated and I don’t think I performed as well as I should have.”

At that point, she knew her chance with the national team might be done for the 2019 World Cup cycle, especially with the tournament just six months away. But in her post-camp meeting, Ellis gave Colaprico a boost by saying that while her performance in January might not have been up to par, the coach wanted to give the midfielder another chance at the SheBelieves Cup in March.

Then things turn another turn.

“Heading into the [SheBelieves] camp, I felt good going in because I knew [Ellis] believed in me and she wanted the best from me,” said Colaprico. “The first training session, I’ve never felt so comfortable at a national team camp training session in my entire life and in the last five minutes that’s when I went to reach for a ball and strained my groin.

“That was the worst part about it. I felt so good. I felt myself. I felt fit. I felt like this was going to be a good camp for me and then to just pull up at the end of a training session in the last five minutes was tough.”

The injury forced Colaprico to withdraw from camp and what she thought might initially be a two-week injury took nearly six weeks to fully recover. The New Jersey native then missed the U.S.’ April camp and now with less than two months until the World Cup, her national team prospects for this summer’s tournament appear dim.

However, she went through a similar experience after her first camp back in 2016.

“I had an individual meeting leaving the camp in 2016 and it didn’t go how I thought it would go,” Colaprico explained. “I just remember hearing some of the things I heard and [thinking], ‘Wow. I have a lot to improve on.”

“As the years went on, I [thought], I’m just not there yet.’ I kind of wasn’t really thinking about the national team anymore,” she added. “I was just thinking, ‘Okay, maybe next cycle.”

Colaprico got through her original disappointment with the national team in 2016 by focusing on her club play with Chicago Red Stars, something she’s aiming to do once again in 2019.

“I think [after my first call-up], I really didn’t play my best because at that point I was kind of bummed and [thought], ‘Maybe I’m not good enough to make it to the next level, maybe this isn’t for me,” she said.

“I kept asking myself, ‘What’s wrong with me? Why can’t I get out of this? And kind of trying to not think it had anything to do with the national team.”

“[But] last year, every day I just remembered thinking, ‘I’m so excited to step on the field with these girls.’ I didn’t care about anything else going on outside of [the Red Stars], and this is the team that I want to fight for and play with and reach the same goals with,” she added. “Focusing on that made me not focus on the national team as much and that allowed me to play better.”

With the Red Stars in 2018, Colaprico helped her team to their fourth straight playoff appearance and she finished No. 1 in the league in chances created, despite playing most often as a holding midfielder.

Still, she’s hoping for one more opportunity with the U.S. before the team heads to France.

“If I can get back and get healthy, obviously I’m hoping for another shot,” she said. “It’s very close to the World Cup, so I understand that.

“At the end of the day, it’s not the worst thing. I don’t have a season-ending injury. I can play this year. I’m still young. There’s going to be other opportunities. I truly believe that.”