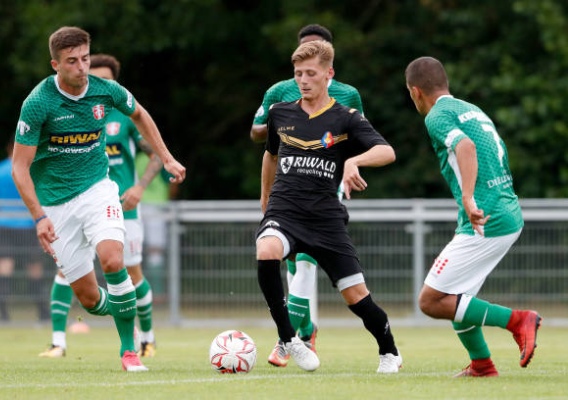 After a decade at Chelsea, Scott eyes a breakthrough with Telstar loan

Kyle Scott has worked his way up through the Chelsea academy but breaking through in a first team that consists of many of the world's best players has been difficult. Now the attacking midfielder is looking to finally step out of the shadows on a loan to Telstar.
BY Brian Sciaretta Posted
July 25, 2018
1:00 PM
THERE IS ALWAYS a lot of glamor for a young player to be signed to one of the world’s biggest teams. There is prestige, first-rate facilities, and sometimes great coaching at the academy levels. Eventually, however, a player just needs to play.

Kyle Scott, 20, has been at Chelsea since he was nine years old. Over that time the English-born American worked his way up through the organization and was part of some impressive accomplishments for Chelsea’s youth teams – winning two UEFA Youth Leagues and three FA Youth Cups and developing into a useful and versatile attacking midfielder.

Last season he seemed to finally be on the verge of a breakthrough when he made the bench for the first few rounds of the Premier League season and eventually made his first team debut as a second half substitute in a 4-0 win over Hull in the FA Cup in February.

Last year he thought he was set to go on loan to a Championship club but with Chelsea having injuries and unresolved transfers through August, he was forced to remain at the club (as he puts it: “I feel that I have almost missed a year even maybe two of playing regular football but things happen.”). As great of an accomplishment as that was to step on the field for Chelsea, Scott also said the mental strength required to be patient and routinely never see first team minutes was taxing.

“For me at that moment of time I was very happy because I was training and working so hard for many months. But it was getting further along in the competition run and the round before I got ill the day before the game so wasn’t allowed to be involved. So to manage to get on during that game and make my professional debut for Chelsea was a dream come true. From the moment of joining the club that’s what you work towards and aim to do, everyone knows how hard it is to do it at a club like this.”

“However, to explain how tough it was not to play regular minutes for a whole season was probably one of the most frustrating things to do through football,” he added. “This is the first time I’ve ever experienced something like this. So now I do understand how tough it is and sometimes how mentally challenging it can be throughout the year. But that’s football and things can happen like this. So I’ve learned and you move on.”

Last week it was announced that Scott would head to SC Telstar of the Dutch second tier on a season-long loan. Last year the club nearly earned promotion the Eredivisie through a breakout performance from U.S. national team forward Andrija Novakovich but came up short in the playoffs.

For the second straight year, Telstar will be hoping that taking an American on loan from an English team will give it the ability to compete for promotion. Scott would love to take Telstar up to the Eredivisie but also relieved to simply have the ability to play week in and week out. Last week he scored in his second preseason friendly.

“It was good to be able to play a game again as it’s been a while. I can’t wait for the league games to come. For me it’s the right club to be at. My main personal choice of this was of course game time. For me, the most important thing this season was how many games I can play. I feel that I can get 30 plus games this season here and I think that’s the only way you can better yourself.

“Of course there’s other options: you can go to the division above here and play five out of every 10 games but then sit on the bench or you can go to a championship side and do the same. But I did that last season and I don’t think that’s an option in my mind. I want to be playing week in week out to show my ability and also enjoy my football. Telstar has a great base. They did so well last season…I’m well aware that the club, the fans ,the manager and staff will expect the same this season to be amongst the top again so I’m here to help them with that and hopefully go one step further.”

It will be a big test for Scott as he is not only leaving Chelsea for the first time, but also leaving England for the first time to play professionally. While this can be a problem for some young players, Scott is adamant that it doesn’t bother him and he believes that being away from his home, family and friends will allow himself to focus more on himself and get to where he wants to be on the field.

In addition to his club career, Scott does have a strong desire to return to the international arena. Born in Bath, England, he is eligible for four different countries: the United States, Ireland, England, and Italy. He has represented all but Italy at the youth level but his most recent involvement was with the United States U-20 team at the beginning of the 2017 cycle.

He remembers his times with the U.S. youth teams fondly and recalls falling out of favor but stresses that the fact he turned down call-ups wasn’t because he wasn’t interested.

“I am eligible for 4 countries, but of course I still haven’t been capped for any, so at this moment of time it’s hard to say which way I will go. I have missed international football and who wouldn’t? The last international trip I’ve been on was with the U.S. I enjoyed the camp. After that there were some more camps that I was asked to go to but with of course the timing with games in England is different. I remember we had our youth Champions League games and at this time I couldn’t miss them as it was my main focus. It became a little distance from me and U.S again because it might have seemed that I didn’t want to go or I didn’t want to play but that was far from it. At the time I was a lot younger and some things may came across the wrong way.”

For Scott, Telstar will offer a fresh start and fighting chance to play regular first team soccer. A return to international soccer might not be as far away for Scott as people realize as he is eligible for the 2020 U-23 Olympic team. The U.S. U-23 team is potentially loaded in the midfield with Christian Pulisic, Tyler Adams, Keaton Parks, Weston McKennie, and others already breaking through.

Still, with a crowded schedule ahead for U.S. Soccer, Scott might still emerge with a positive season for Telstar.

“This season for me is about getting back to playing regular football, scoring goals, creating goals and showing people what I can do week in week out,” Scott said. “I’ve always enjoyed my time playing for the United States and I do feel strong that the improvements in the next coming years will be massive for the U.S - it will be bright. I know the [Olympics] is very important for United States and I’m sure they will be starting work and preparation for that very soon, we will see what happens. Two years is a lot of time and in football anything can happen.”