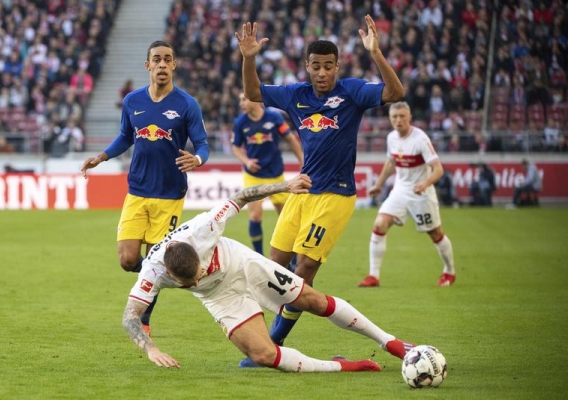 It was a wild weekend for Americans aborad as there was some very high moments and some low moments as well. As he does ever week, Brian Sciaretta goes into detail of what happened over the past three days.
BY Brian Sciaretta Posted
February 17, 2019
5:00 PM
TYLER ADAMS returned to RB Leipzig’s starting lineup and once again did not disappoint. Elsewhere, Tim Weah continued to look very lively for Celtic. On the other side of the spectrum, there were also a lot of struggles this past weekend for Americans abroad as well.

Overall there is a lot to like about the state of things with Americans abroad. The young kids are stepping up in the Bundesliga in meaningful ways. Brooks had good outing but he needs to show this on a regular basis.

But the concerns of the week center around Matt Miazga’s first step backward for Reading, a rough patch for Duane Holmes, Andrija Novakovich and Erick Palmer-Brown getting hammered in the Eredivisie, and finally the drop in minutes for Jonathan Amon continues.

Here are the weekend’s top stories for Americans abroad in detail.

Tyler Adams, 20, is off to a tremendous start to his Bundesliga career. After a strong first three games, Adams was only a late-game cameo last week for RB Leipzig in a draw against Eintrach Frankfurt. On Saturday he returned to the starting lineup for Leipzig and was first-rate, yet again.

Adams had the play of the game when he assisted on Yussuf Poulsen’s second goal to finish off the scoring at 3-1. It was his first assist in the Bundesliga and it couldn’t have been more impressive. It was reflective in how Adams has looked to be aggressive with his passing to get the ball into dangerous positions.


But aside from that, he led the game in tackles (four), two interceptions and two clearances. He is showing himself to be a true disruptive force. Coincidentally, that is something that new U.S. national team manager Gregg Berhalter stressed in his opening press conference as something he values greatly.


The finished product of Tyler Adams is going to be very valuable. He’s been such a big addition to Leipzig. 11 goals scored, 1 conceded with him on the field. Amazing assist today & he’ll be playing in the Champions League next year. Credit to #RBNY for his development

The bottom line is that Adams has now played in five games for RB Leipzig (with four being full 90 efforts). The team has scored 11 goals with him on the field and conceded just once – off a fluky handball to a teammate which resulted in a penalty. Leipzig looks as if it will safely finish inside of the top four this year in Germany and Adams will be playing in the Champions League next year.


Weah continues to impress with Celtic


Tim Weah, 18, has performed well for Celtic on his loan from Paris St. Germain. The native New Yorker has often been energetic and creative on the field to help create offensive opportunities. While most of his appearances have come off the bench, Weah has made the most of his minutes.

On Sunday, Weah came off the bench and played the final 13 minutes, hit the post and was a handful to defend. What stood out, however, was Weah’s yellow card after the final whistle. While it was a tough incident, Celtic fans were beyond pleased with Weah’s display of heart.


Don’t be surprised if Weah returns to Celtic next season on another loan.

McKennie steps up at right back


It remains to be seen if it is a good thing that Weston McKennie is being used at so many different positions at Schalke. Versatility is good but it is good for a young player to get settled in a position.

McKennie, 20, earned the start on Saturday against Freiburg and went the distance in a 0-0 draw where both teams picked up a red card. McKennie performed well at the position where he covered a ton of ground and completed 87% of his passes.


John Brooks, 26, is so maddeningly inconsistent for both club and country that you never know which version you are going to get: the world-class version or the total liability version. Last week as indeed a tough run for Brooks. But Saturday was a return to this top-form version.

In Wolfsburg’s 3-0 win over Mainz, Brooks was very important to the victory. His passing out of the back was near-flawless and he picked up seven clearances and three tackles along the way.


Fabian Johnson, 31, hasn’t played much for Borussia Monchengladbach this season in its hunt for Champions League spot next year but he did get the nod at right back on Sunday against Eintrach Frankfurt.


Johnson’s outing was unspectacular but that could have been due to rust more than anything. If he continues to play, however, he could sneak back into the U.S. team’s plans – but probably only for the left back position because that is where the most help is needed.


For many American players in England’s Championship or the Dutch Eredivisie, it was not a weekend to remember.

The most eye-opening performance was Andrija Novakovich and Fortuna Sittard which dropped a 6-0 decision to Heracles – a club that was just one point ahead of Sittard heading into Saturday’s game. This was expected to be a close game that could have been a big opportunity for the newly promoted Fortuna Sittard. Novakovich won a lot of aerial duals but only touched the ball 26 times.

Also in Holland, Erik Palmer-Brown earned the start for last-place NAC Breda against Ajax but was on the wrong side of a 5-0 decision

In the FA Cup, Duane Holmes and Derby County were bounced from the tournament with a 3-0 loss to Bright & Hove Albion of the Premier League. Holmes has been great since becoming a regular with Derby but has had a tough week.

Similarly, Matt Miazga had his toughest outing since joining Reading FC as his side dropped a 4-0 decision on the road to third place and heavily favored Sheffield United.

On the flip side, Cameron Carter-Vickers had another strong showing for Swansea City in a 4-1 win over Brentford. And in the Eredivisie, the oft-injured Desevio Payne made the bench but was an unused substitute for Excelsior in a 2-1 win over FC Emmen. Payne has always been full of promise but staying on the field has proven to be exceptionally difficult.


Michael Hoyos continues to be a mainstay for Guayaquil City in Ecuador and the winger started and played 65 minutes in a 1-0 win over Delfin on the road.


Since the Danish Superliga resumed from its winter break, United States U-20 winger Jonathan Amon has only been coming off the bench late in the games for Nordsjaelland. On Saturday he entered the game in the 81st minute as Nordsjaelland scraped by with a 2-1 win at home over last-place Hobro (American Emmanuel Sabbi went 69 minutes for Hobro and U.S. U-20 hopeful Christian Cappis was an unused sub in the loss).

Amon, 19, has shown a ton of potential over the past year but still is working to round-out his game. In the meantime, it is natural that he hit barriers along the way. Forcing his way through difficult times is part of development.

While he has earned a full national team call-up last year, the U-20 level internationally is a good spot for him. He should be able to play a lot of minutes at this summer’s U-20 World Cup and offer a measuring stick against players of his age group.