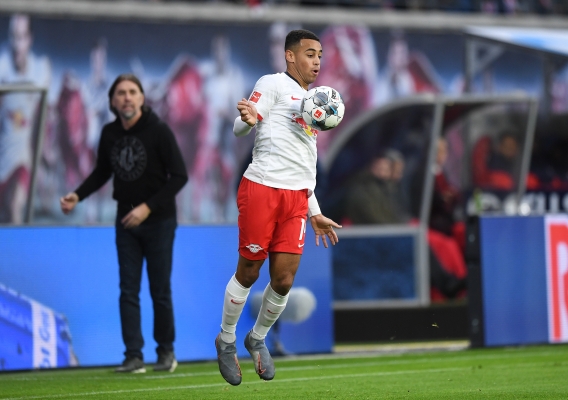 After months of murky reports and timelines, Tyler Adams is officially back and he got a start for the Bundesliga leaders in a win. While not everything was positive, Tim Ream, Alfredo Morales, and Zack Steffen all came up with big wins for their respective clubs. ASN's Brian Sciaretta reports.
BY Brian Sciaretta Posted
December 23, 2019
6:00 AM
AFTER TWO STRAIGHT weekends that were depressing for American fans and were almost completely void of any sort of positive news, this past weekend was a significant reversal for Americans abroad.

Sure, the schedule was light since the winter break arrived for many of the leagues across the middle of Europe and Christian Pulisic was an unused substitute for Chelsea after a few straight lackluster outings. But all things considered, there were some nice outings and, of course, a huge comeback for Tyler Adams who has missed most of the last nine months due to lingering injures.


So much for easing your way back after a long absence. Tyler Adams was given the green light to play for RB Leipzig and was immediately tossed into the starting lineup on Saturday for the Bundesliga leaders – where he went 86 minutes.

Most striking is that Adams was tossed into the lineup at right back where he made his one appearance with the national team under current manager Gregg Berhalter (a move that was controversial among U.S. national team fans).

Overall, it was a performance from Adams that should have pleased anyone watching. Outside of the first five minutes (when he came out very aggressive), he wasn’t involved much in the attack. But defensively he was outstanding and showcased his ability to play mistake-free, clean soccer. He has a unusually strong ability to sense danger before it happens and get himself into good position to break-out chances. This is true regardless of him playing as a No. 6, a No. 8, or at fullback.

It was smart for Leipzig to get him into the team before the winter break to give him momentum and reduce the learning curve needed under manager, Julian Nagelsmann.

Playing Adams at right back probably made sense in this game as well since it reduced the severity of any type of defensive mistake Adams might have made due to rust (by having coverage in the middle). A strong winter camp should see Adams gradually worked back into the middle.

But having Adams take the field in a winning effort for the Bundesliga leaders was a great way to end 2019 and reverse a dreadful few weekend for Americans abroad.

Steffen/Morales give Fortuna a win


Coming into this weekend, Fortuna Dusseldorf was playing horrible soccer. It was outscored 16-1 over its last five Bundesliga games and had conceded 19 goals over its past six games. That stretch sent it into the relegation zone.

The U.S. national team duo of Alfredo Morales and Zack Steffen earned the start on Sunday against Union Berlin and both played well in a surprising 2-1 win to reverse the recent skid. Steffen made five saves in the win. Morales was a key cog in the middle of the field on both sides of the ball.

The win moved Fortuna out of the automatic relegation spots and into the relegation playoff position of 16th place. That news came at the expense of Josh Sargent who is out injured but who saw his Werder Bremen team lose to Koln and drop into 17th place with its fourth straight loss.

Brooks sharp in loss to Bayern


It was always going to be an uphill climb for a Wolfsburg team that struggles to score goals (just 18 goals scored through 17 games this season) to get a result away at Bayern Munich. But for 85 minutes, Wolfsburg gave Bayern all it could handle and was playing well – including Brooks on the defensive side.

But Bayern finally came through in the end with goals in the 85th and 89th minutes for a 2-0 win. That performance was the perfect snapshot of the first half of the season or Wolfsburg. The quality is there, besides the finishing. If this team had even decent scoring, it would be at or near the top of the Bundesliga table.

Brooks is having a very, very good season by his standards and concludes 2019 as one of the best American players in the game.

The Rest of Germany


The rest of Germany was mostly weak for Americans.

Timothy Chandler made his third straight start for Eintracht Frankfurt after a rough 18 month stretch where he rarely played due to injury. He is back on the field, but it hasn’t gone particularly well as Eintracht has lost all three games. The last two, a 4-2 loss to 15th place Koln and Sunday’s 1-0 loss to last-place Paderborn, have been particularly brutal. The club has one draw and six loses in its last seven Bundesliga games.

There is still a huge number of players not playing in Germany – either due to injuries or just not be chosen by their respective managers. Weston McKennie, Josh Sargent, and Julian Green remain injured. Forwards Bobby Wood and Sebastian Soto remain two forwards who can’t get off the bench for their 2.Bundesliga clubs. Winger Kevin Lankford  also went as an unused substitute for St. Pauli over the weekend.

Jann George, however, notched an assist for Jahn Regensburg in a 3-2 away win over Bochum.

One of the better stories this season in the lower leagues is from Terrence Boyd who has ripped it up in the 3.Liga for Hallescher – which he joined this summer from Toronto FC. Through 17 games, Boyd has 10 goals and six assists – including on Saturday in a 1-1 draw vs. Uerdingen.


England has been a mixed bag for Americans this year and it continued in that trend over the weekend.

The Premier League gave American fans very little. Christian Pulisic did not play for Chelsea in a big 0-2 away win over Tottenham in a London Derby. DeAndre Yedlin only made a stoppage time cameo for Newcastle in a 1-0 win over Crystal Palace.

In the Championship, there was a healthy number of Americans in action.

The biggest win went to Tim Ream and Fulham which reversed a three-game losing skid with an impressive 2-1 win over a Leeds United team that is in contention for promotion.

Geoff Cameron scored a rare goal for Queens Park Rangers in a 2-2 draw with Charleton in a London Derby between two midtable Championship teams.

Also among Americans over 30 in the Championship midtable, Eric Lichaj went the distance for Hull City which he captained to a 3-0 win over Birmingham City.

A particularly concerning game for American fans was in Reading’s 3-0 win over Derby County. Not only did Matt Miazga not play for Reading due to injury but Derby County did not score – gain. Duane Holmes got the start and while Derby suffered an early red card, it still was held goalless. It now has scored just three goals over its last eight games. Wayne Rooney will soon be able to suit up for Derby but its offensive problems are so severe that it will be tough for him to turn them around by himself.


There were Americans in action throughout Europe that are noteworthy.

Chris Durkin, 19, continues to start in Belgium for St. Truiden and went the distance in a heartbreaking draw against second-place Royal Antwerp. The game was scoreless for most of the way by St. Truiden took an 87th minute lead but conceded the equalizer in the fourth minute of the stoppage time on a penalty.

Andrija Novakovich, 23, started and went the distance for Frosinone in a tough 1-0 away loss to Benevento. Novakovich has scored just two goals this season (both coming in one game) but Frosinone has had a nice first half of the season. After a slow start it now sits in third place of Serie B. Novakovich's hold-up play has been useful for the club which has been a factor in why he continues to start, despite the limited output.