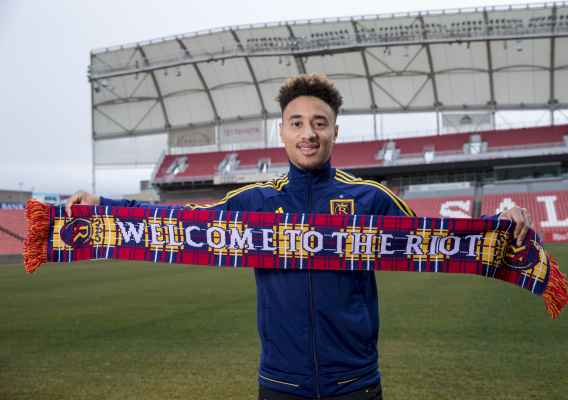 In 2011, Adam Henley was the top young American dual national in soccer when he broke through in the Premier League. Unfortunately for the Tennessee native, injuries took its toll before he could completely decide on the U.S. or Wales. Now with Real Salt Lake, Henley is looking to revive his once promising career.
BY Isaac Heath Posted
January 23, 2018
2:00 AM

One of the many beauties of professional sport are the diversity in routes to reach the highest level. Whether a relentless journeyman like Jay Demerit, or a prodigy like Christian Pulisic, all pros have experienced adversity that has forged them into a finished product worthy of top tier soccer.

Real Salt Lake's newest signing Adam Henley is all too familiar with the highs and lows of the journey of a professional soccer player.

As a 17 year old he earned a spot on Blackburn Rovers first team and found himself playing an important role at right back and was the second youngest player in the Premier League during the 2011/12 season behind only Raheem Sterling. Over the course of the next 6 years, Henley would play in nearly 100 games for the club as well as make 2 appearances with the Welsh National team.

In his first two games with the senior team he lined up against Liverpool on Boxing Day and helped Blackburn to a 1-1 draw. His follow up performance was even more memorable as he helped Rovers spoil Sir Alex Ferguson’s 70th birthday with a 3-2 victory at Old Trafford, the first for Blackburn since 2006.

Reflecting on his impressive rise to the Premier League, Henley can appreciate the accomplishment while drawing on the experience of that unique opportunity to serve him in his next chapter.

"It was exciting. As a young player you are not expected to go out and be the best player on the pitch, so the way I saw it I didn't really have anything to lose. It was a great experience to have right at the start of my career because I now know the standards to play in a top league and I can take that experience with me wherever I go,” says Henley.

Despite a dream start to his career at Blackburn, the team crashed out of the Premier League in 2012 and in May 2017 became the first Premier League champion to sink to the third tier.

Henley struggled individually as well, as a series of hamstring injuries kept him out of the first team for much of the last few years at Blackburn. Ultimately those injuries left him without a club at the end of the 2017 season and the American born Henley found himself at a new low in his career.

"At the end of the day that's football", says the 23 year old. "It's a rollercoaster that’s filled with ups and downs and you've got to keep yourself on an even keel throughout."

Rumors swirled through the summer that MLS teams were interested in the dual national. It all came to a head in the last few weeks when Real Salt Lake announced they were taking a chance on him.

If Henley can stay healthy he could end up being one of the big offseason steals in MLS. In addition to being a proven player at the highest level, because he has a US passport, he won’t be taking up an international roster spot.

Real Salt Lake GM Craig Waibel gushed about Adam Henley on signing day last week saying, “It’s a perfect scenario for us to bring in a young, energetic player that needs to prove himself.”

For the versatile fullback, the feeling is mutual.

“It’s a real forward-thinking franchise and it was an easy decision for me when they showed their interest. They just spent a lot on a brand new facility, and speaking to the coach and how they are looking to play. It was something I wanted to be a part of really,” explains Henley.

In addition to the prospect of jump starting his career in Salt Lake, Henley also is excited about the opportunity to be back in the US to be near family. After being born in Knoxville, Tennessee, he moved with his mother back to the UK when he was only 2, and while he has maintained close contact with the U.S. side of his family, his schedule the last several years has prevented more frequent visits.

“My dad and whole side of the family still live in Tennessee so this gives me a chance to spend more time with him which is great,” says Henley. “I am also lucky to have dual citizenship and I am just really happy to be back in the states to kick my career back on.”

When he skyrocketed onto the scene in 2011 the pacey fullback received interest from both Wales and US Soccer. Ultimately, Henley decided to play with the Welsh national program at the time and has since represented the senior team twice.

The concept of dual national recruiting, especially among young players, has been revived recently with the decision of Monterrey standout Jonathan Gonzalez to leave the U.S. program which he represented from the U-14 level through the U-20 team last year.

It is certainly a situation to which Henley can relate. For many, he was seen as the top young American dual national at the time of his Premier League breakthrough and the U.S. was actively pursuing him to switch. Henley remembers it being a hard decision.

“It was definitely something I had to think about,” Henley recalls. “It wasn't necessarily an easy decision for me. But you know at the time for me I was doing well in the Wales set up and doing well with my football and it didn't seem right to change anything at the time. For me it was definitely the right decision at the time at my age and how my career was progressing.”

There is the potential for that debate to revived, however, and it might not be resolved. Despite playing for Wales, Henley is not cap-tied as his two appearances have come in non-binding friendlies. While this leaves the door open for the United States to be back in play, at this point that debate seems to be secondary for him.

“International football is great and is something I always love to be a part of,” Henley discussed. “At the moment I am just concentrating on getting my football back on track and playing games and performing to the best of my ability, and whatever comes of that will be.”

When RSL convenes in Herriman, Utah for preseason on January 26th, Henley will get a much needed fresh start in a foreign land he was born in. After the setbacks of the last few years, he will get the chance to show if from the ashes of his struggles with injuries he will be forged anew and able to rise back to the top of his game.

“Injuries are always going to happen in football,” explained Henley. “I like to think it has made me stronger, not only physically, but mentally knowing how to deal with setbacks like that.”

Real Salt Lake and its fans hope that is the case with their new, experienced yet still young, defender. If Henley is able to succeed in his return, he has the potential to be a great star in MLS, which would make possible the opportunity for another fresh start. Perhaps a fresh start in red, white and blue.