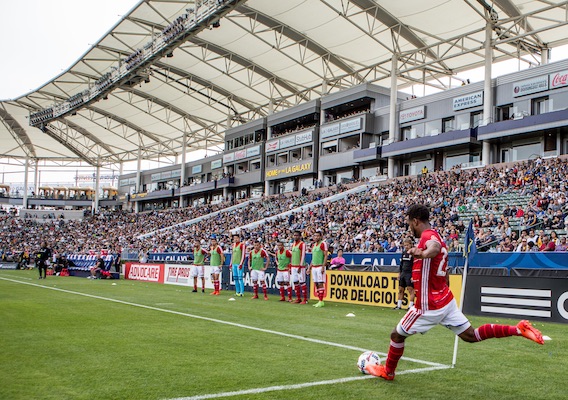 There is a lot to talk about on Thursday afternoon including a big interview from Landon Donovan, surgery for a U.S. international, and a big new feature coming for ASN.
BY Brian Sciaretta Posted
February 22, 2018
6:00 AM
The CONCACAF Champions League continues with FC Dallas in some trouble and two more teams opening tonight. Meanwhile, Landon Donovan opens up about a huge number of topics.

FC Dallas in a tough spot


FC Dallas fell to Tauro FC in Panama City on Wednesday night 1-0. The team has itself to blame as it had more chances than Tauro but could not find the back of the net. Instead, it fell asleep on a second half corner kick and dropped the first leg of its CONCACAF Champions League opener.

The deficit is not the end of the world for Oscar Pareja’s team but it was clear his team was still in preseason form as shown by the fact Mauro Diaz was substituted out of the game in the second half. Now returning to Frisco next week, FC Dallas will need to overcome the deficit while trying to conceded a devastating away goal.

Of interesting note is that a local report indicated that Tauro had been spying on FC Dallas well in advance of this game.

FC Dallas has other concerns in addition to its deficit in the Champions League is that it will be without Kellyn Acosta for roughly six weeks as the U.S. international is undergoing surgery for a hernia.

This will keep him out until the later stages of the Champions League, the beginning of the MLS season, and the upcoming U.S. national team friendly against Paraguay.

American Soccer Now has heard that the hernia has been bothering Acosta for nearly a year. It is expected that this surgery will greatly help the midfielder improve his play.

Most interestingly he expressed optimism about Carlos Cordeiro taking over and saying that he is very different from Sunil Gulati and would often stand up Gulati during board meetings when there was a difference of opinion. He also gave his reasons for coming out of retirement and playing with Leon and stated his desire to have an American become the next national team coach.

Perhaps most interestingly, he said he is pushing for more national team callups. Perhaps not to play, but also serving as a mentor to all the young players coming up into the team now.


As for our thoughts, Donvoan's insight on Cordeiro give more weight to the take that the new president of U.S. Soccer will be quite a bit different than his predecessor. Cordeiro’s decision to get into the race when Gulati still wanted the job was the best indication that Cordeiro was not happy with the status quo and wanted to make a change. The direction of the change remains to be seen, but there is more evidence than not that Cordiero will take a different approach.

On the idea of Donovan returning to the U.S. team, it could make sense if Donovan can play well on the field for Leon. No one is under any impression he will be in the team’s picture for a long period of time. With a lot of young players coming into the mix, perhaps the experience from the team’s most accomplished player could help. That being said, he does need to be able to step on the field and contribute if needed. A player that exists only as a mentor seems like a waste of a roster space. But one that can be a mentor while also contributing occasionally? That might be useful.


The news is slower these days but ASN is working on its MLS Minutes Matrix. It will be a weekly feature that tracks how minutes are handed out this season.

It will cover the most recent week and the season to date for the following 11 categories.