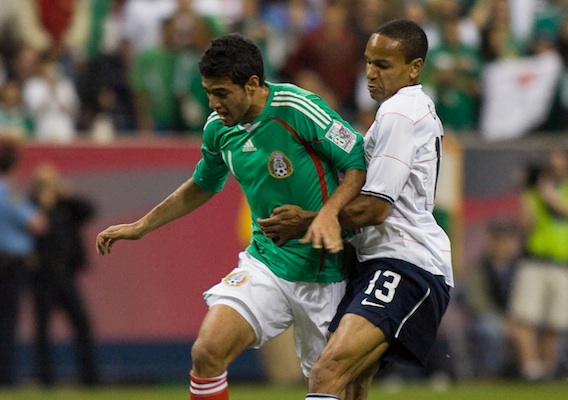 A Mexican Midfielder Nears a Return to El Tri?

In ASN's newest column, CONCACAF correspondent Jon Arnold takes a look across the region in search of USMNT opponents on club teams. Today: Carlos Vela, Bryan Ruiz, and many more.
BY Jon Arnold Posted
January 15, 2013
5:29 AM
Editor's note: Much of the talent on the teams the United States will face in the Hexagonal round plays for top European clubs. Each week, we’ll examine how several players performed.

Costa Rican midfielder Joel Campbell is gaining Real Betis manager’s Pepe Mel’s confidence, and he’s repaying the boss man. Campbell opened the scoring in Betis’ 2-0 victory against Levante (whose back-up keeper is Campbell’s countryman, Keylor Navas). Carlos Vela, a former Arsenal player himself, scored his eighth goal of the season for Real Sociedad. With the Hexagonal opener against Jamaica just around the corner, Vela has as many goals in Spain as Chicharito has in England, which makes a strong case for his return to El Tri.
Gol Vela @SpheraChannel by SpheraChannel

Gilberto Martínez didn’t play but was presented as a Lecce player. The former Serie A club was relegated and is now in the third division after match fixing penalties. Bryan Ruiz played the full 90 for Fulham in a draw with Wigan. Bryan Oviedo was an unused substitute for Everton.

Wigan captain Maynor Figueroa went the full 90 as the left back in a 3-5-2 formation. Roger Espinoza did not make his Wigan debut Saturday. Former Houston Dynamo forward Carlo Costly scored (finally, says Monday’s cover of Diez, noting he hasn’t scored in more than a year) for Veria, giving his Greek team a 1-1 draw with Panionios. After, he and his teammates performed a boat-rowing celebration. Yes, this was the only video I could find. Why do you ask? Celtic are on a break, but expect Emilio Izaguirre to play in Tuesday’s friendly against Steaua Bucharest before returning to league action this weekend. Andy Najar could make his Anderlecht debut Wednesday when they play Gent in the cup. Wilson Palacios might be good friends with American Maurice Edu. Both have seen very little time for Stoke. Palacios might make a move to join QPR, though Club America are also in for the midfielder. Anthony Lozano, the 19-year-old forward playing with Valencia B, helped his team to a 3-1 win over Gimnástic.

Defender Adrian Mariappa went the full 90 for Reading in their thrilling comeback victory over West Brom. Nyron Noseworthy played 90 for Watford in a win over Middlesbrough. Former Whitecaps and Red Bulls midfielder Dane Richards was an unused sub for Burnley, who beat Crystal Palace, 1-0. Rodolph Austin went the full 90 in a losing effort. Leeds dropped a 2-0 result to Barnsely. Motherwell midfielders Chris Humphrey and Omar Daley return to action this weekend. Ricardo Fuller came on as a late sub for Charlton against Blackpool. Also coming on as a sub was Birmingham City’s Marlon King, who played 12 minutes in the Blues’ 1-1 draw against Huddersfield. Nathan Smith spent the entire match on the field as Chesterfield defeated Northampton, 3-0. Keammar Daley did not appear for Preston North End.

Guillermo Ochoa, the most-capped keeper in the Mexico fold, kept a clean sheet for Ajaccio against PSG. L’Equipe, the French sport daily, named Memo the best keeper of the week in Ligue 1. Andres Guardado, who is often Mexico’s starting midfielder, went the full 90 at left back for Valencia. He’s been starting there for several weeks and has been quite effective for the club who are now on a three-match winning streak. Guardado said he is starting to feel comfortable in the new position. Giovanni Dos Santos lined up in the midfield for Mallorca and hit the woodwork with one of his shots in a 3-1 defeat. Chicharito didn’t play in Manchester United’s defeat of Liverpool. Former Mexico manager Javier Aguirre didn’t call Hector Moreno’s number for Espanyol.

Panama doesn’t have any active players in Europe’s top league’s but some of their exports are playing outside the region. Yairo Yau went the full 90 for Sydney FC alongside Alessandro Del Piero in a 2-1 victory. There are plenty of Panamanians in Colombia and other South American leagues but most of those are on break. Whose performance strikes the most fear in your heart? Have we missed any players who you think should be in the U.S.’ game tape rotation? Let us know below. Jon Arnold (@ArnoldcommaJon) is ASN's CONCACAF correspondent.