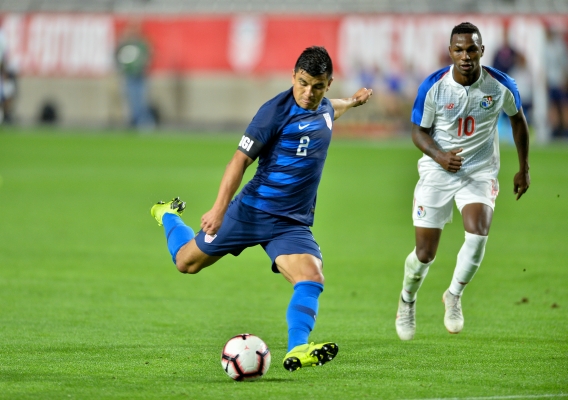 January camp is often a rare opportunity for many players out of the spotlight to impress. With a pair of solid performances, ASN's Brian Sciaretta looks at the winners from the first January camp of the Gregg Berhalter era.
BY Brian Sciaretta Posted
February 04, 2019
9:00 AM

THE FIRST January Camp of the Gregg Berhalter era is now over and it is hard to say it wasn’t successful. The players all looked as if they were enthusiastic to play under the new manager and there seemed to be a real system in place to build on. Of course there is a long way to go, but the first steps were promising at least.

Of course the level of competition was not high but the team never plays quality opponents for January camp and the team typically struggles. No matter the head coach, January camp friendlies are typically full of poor performances with players stuck obviously stuck in preseason mode.

When compared with previous years, this was a huge improvement. And what was clear is that Berhalter didn’t use his games to give everyone on the roster a chance to play. He took the opportunity to give repeated reps to the players he felt were the best options to be part of the team moving forward. Compared with previous camps, there were a lot of players who did not play in either friendly.

Of course it will be hard for many of these players to be on the roster during games when European players are options. But there still are spaces available down the line.

Here are the biggest winners from January camp.

The San Jose right back went from never having played for a U.S. national team at any level, to being perhaps the team’s second option behind DeAndre Yedlin. Lima was very good in both games and played the position how Berhalter wants it to be played in terms of cutting into the middle of the field with the ball and being someone that help the team both with creating chances and maintaining possession.

Lima, 24, trained at Hertha BSC during the offseason and reports are that he did very well. While nothing is imminent, it would not be hard to imagine him moving abroad at some point in the next few years.

Entering into the camp, it seemed as if Reggie Cannon had the leg up to play behind Yedlin, but Lima clearly passed Cannon – which is fine because Cannon should get plenty of time with the U.S. U-23 team over the next 18 months.

The LA Galaxy playmaker looked ready to take a big step forward with the national team two years ago under Bruce Arena after he impressed at the start of an important World Cup qualifier. But a serious injury set him back for a year and, as a result, he was behind most of last season.

Lletget, 26, was the man of the match against Costa Rica and clearly looked ready to handle better opponents. Starting for the U.S. team won’t be easy as Cristian Pulisic could play the No. 10 but Lletget looks like someone who is capable of being on a first choice 23-man roster and perhaps being an asset off the bench.

The NYCFC winger did not play much last season, which was strange in that he played well whenever on the field. Surprising to some but not to others, Lewis also looked very impressive for the U.S. team in his first two caps. He only played 44 minutes but picked up two assists during that span.

Part of the problem with the starting lineup for both of the recent friendlies is that Berhalter did not have nearly enough attackers in his front five who could beat defenders in a 1v1 situation. Lewis came into the game and effectively improved that weakness. With the ability to also hit an strong final ball, Lewis was highly effective.

There is a good chance that Lewis won’t be with the team come March when the European contingent is included, but Lewis will at least be an important player with the U.S. U-23 team. If he impresses there while also playing for NYCFC, he could very well pass others on the depth chart.

After winning the MLS Defender of the Year in 2018 while also earning his first U.S. cap in November against Italy, it was expected that Long would get a real chance during the January camp friendlies. To see him get the captain’s armband, however, was both a surprise and it was telling. Behalter is obviously someone who rates Long and will probably look to him moving forward.

Central defense is no sure thing with the U.S. team. It was only recently that Matt Miazga and Cameron Carter-Vickers began playing regularly again – with both playing in the second tier Championship. John Brooks still needs to show consistency for the U.S. team now more than five years since his first cap.

There are a lot of good options for Berhalter but all come with question marks. But even if Berhalter goes with Brooks, Miazga, and Carter-Vickers as his first three central defenders, Long seems to be fourth – at worst. If he starts, I am sure few would be shocked.

Like his partner Aaron Long, Zimmerman also improved his standing in the central defense depth chart. The tall central defender adds an imposing aerial presence from the position that most other in the pool do not have. He is likely in contention with Cameron Carter-Vickers for a spot on the team but there is also a chance that Carter-Vickers could focus his efforts on the U.S. U-23 team for now. That might give Zimmerman an extended stay in Berhalter’s rotation.

The U.S. national team winger had a great outing against Costa Rica. In the first half, he was the only player on the field able to attack in 1v1 situations. But what is great to see for Arriola is that his final ball has improved significantly – which was his weakness earlier in his career.

But what also helps Arriola is his ability to play defense. That will give him a leg up on others like Romain Gall or Jonathan Amon. Arriola can track back, force turnovers, and disrupt opponents well.

Arriola does not have a lock on getting called up when the full team is available but he clearly helped himself based on the Costa Rica game.

Michael Bradley only played against Panama and did very well in that game. He is in a peculiar situation given that he was the captain of the failed qualifying team and he is one of the rare players over 30 who is still in the contention for a roster spot. But his age might actually be to his advantage right now in Berhalter might want to have experienced guys on the team – at least at the start of his tenure.

There is a ton of competition right now at the No. 6 and No. 8 positions with includes possibly Weston McKennie and Tyler Adams depending on how Berhalter sees their roles.

The fact that Bradley didn’t wear the armband means that he is no longer automatic to be called up. He remains a very talented player and one who could help the team in certain situations. Whether or not he gets called up is game by game and Bradley said all the right things in camp.

It would hardly be surprising if Bradley plays better without the pressure of having to be the key player on the field or the captain. He might not be in the picture by the time the Qatar World Cup gets here but there is plenty of important soccer to play before then.

The young Chicago Fire playmaker played well against Panama but was uneven in the first half against Costa Rica. He improved in the second half against the Ticos before he was substituted out of the game. This will be a tough position to break into for the team when the European players are here but Miahailovic is in a great spot to see an increased role as the playmaker for the U.S. U-23 team.

If the U-23 gets to the Olympics and Mihailovic plays a role, he will be fully prepared to make a transition. It is easy to forget that Mihailovic missed most of 2018 recovering from an ACL tear and he only got a few games in before the offseason started. It was natural for him to be rusty. But the talent is clearly there and due to his youth, there is a path for him to play within U.S. Soccer before making the transition to the full team.

He remains a work in progress but one with a potential upside that could help the U.S team down the road.

No player played poorly over the course of both games but for those who did not get on the field, the camp must have felt like a missed opportunity.

For three players in Kellyn Acosta, Reggie Cannon, and Russell Canouse, it was particularly surprising that they did not feature. Acosta was cut halfway through camp and his previous call-ups to the U.S. team make it clear that he is falling behind others in those positions.

For Russell Canouse, he was instrumental behind DC United’s surge in the second half of the season and was one of the few central midfielders who only plays the No. 6. His play suggested that he was ready to get a deep look on the U.S. team to see if it would translate over. That did not happen and he will have to continue to impress at DC United to work for his elusive first cap.

With Reggie Cannon, the news is not as much of a setback as Cannon is eligible for the U.S. U-23 team and will have that avenue to impress before trying to earn another shot with the U.S. team.