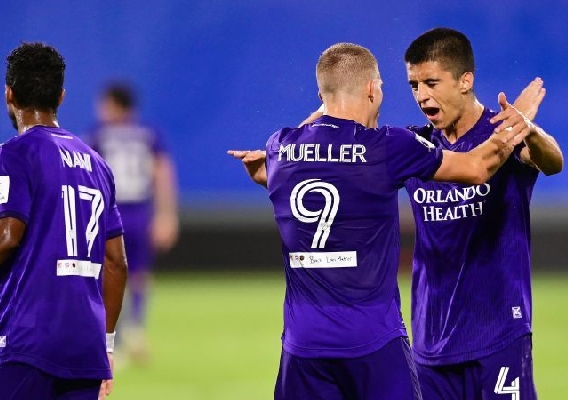 Orlando won the MLS opener on Wednesday night and Philly looked like a contender in downing NYCFC. In Europe, Antonee Robinson is a great success story and Erik Palmer-Brown is surging in Vienna. Brian Sciaretta with a detailed breakdown.
BY Brian Sciaretta Posted
July 09, 2020
1:05 PM

THE MLS IS BACK tournament opened up on Wednesday and it saw Orlando down Inter Miami in and up and down game. Meanwhile abroad, the English season’s latest series of game took place as the season entered into its final weeks.

Earlier in the midweek, Christian Pulisic added to his phenomenal run since the restart with another great goal in a 3-2 win over Crystal Palace in a London Derby. In the five Premier League games since the restart, Pulisic has either scored (three goals) or drawn penalties (two drawn penalties). The sky is the limit for Pulisic right now and he still hasn’t even turned 22 yet.

And his latest round of numbers.

Also earlier in the week, Cameron Carter-Vickers put in another mixed outing for Luton Town in a 1-1 draw with Barnsley. It was a matchup between the two last-placed teams in the Championship. Carter-Vickers was good defensively in clogging the middle but his passing hovered around 50% and he was 0/10 in his accurate long ball. Luton Town is heading towards relegation but the test for Carter-Vickers will simply be to find a club in the Championship that will buy him so he can end the loan-army route and grow.

As for Wednesday’s action, here are the top stories.

The MLS is Back tournament opened on Wednesday in a matchup between the two Florida teams in Orlando City and Inter Miami.

Orlando City ended up coming away with a 2-1 win and it was deserved. Nani and American winger Chris Mueller were the two best players on the field and were simply too much for the expansion Miami.

Here are my thoughts from the game.

The game was very rusty, overall. But given the circumstances that none of the teams have played in four months, the circumstances around the globe are murky, and off-field arrangements in Orlando aren’t idea, it is unfair to expect anything else. Especially between two teams that are lower-half in the league.

After a brutal first half, things picked up for both teams in the second half by way of opening the game, taking chances, and creating opportunities.

Chris Mueller was the MOTM. His passing was 30/31 and his work-rate was very impressive given that he hasn’t played in four months. Nani also had a big impact but Mueller was good throughout his 82 minutes, even in the tough first half.

The result was deserved. Miami was undone by their sloppiness in the back. They were simply lucky that they didn’t concede even more goals out of backline errors. That is a big problem for this team now. The final goal was simply a lack of paying attention.

Dom Dwyer’s errant elbow on Andrés Reyes was brutal and tough to watch. Dwyer has always had rough moments but his scoring would overshadow that. With him not scoring nearly as much, these incidents from Dwyer standout more. But they’re nothing new.

Kudos to Nani for turning in that kind of effort in this stage of his career and in this type of environment without having played much recently. Many of the “older foreign imports” in MLS haven’t payed off. But Nani delivered a goal and an assist in this one. His second half effort was commendable.

It is quite puzzling how Mueller never earned a January call-up earlier this year. He’s been very underrated for Orlando.

Philadelphia gets past NYCFC

This was a bigger game than the opener because it featured two better teams, but Philadelphia came away with a big 1-0 win over NYCFC and emerged as the team to beat in Group A.

Overall, the game was better played than Orlando-Miami and the first half was actually quite lively, despite being scoreless. Neither team was close to midseason form but both were less rusty than Orlando or Miami.

The game turned in the 63rd minute when Alejandro Bedoya took a loose ball following a blocked Brenden Aaronson shot and fired a low ball past Sean Johnson for the game’s only goal. That was all Philadelphia needed to win.

Philadelphia showed why it will be a tough out in this tournament. It came up with great goalkeeping and Andre Blake made some huge saves along the way. Philadelphia’s defense was also solid and U.S. U-23 defender Mark Mckenzie led the way with six clearances.

Philadelphia was more dynamic in the attacking third and had a few plays that fell apart only at the final ball. In a preseason game this would be a promising sign and it is only a matter of time before things click for the Union.

Brenden Aaronson was very good in the first half and at the start of the second half. Shortly after the goal, Aaronson tired and was not having the same level of impact. But he has shown a lot of growth so far in his second season after a pretty good first year in 2019. He is physically stronger and more dynamic. His finishing still needs work.

Big 1-0 win for Philadelphia over NYCFC.
Thoughts
- Blake was immense.
- Better game than ORL-MIA
- Philly will be a tough out
- NYCFC is 0-3 to start 2020
- McKenzie solid. 6 clearances
- Aaronson strong in 1H. Tired in 2H
- Bedoya is the ideal veteran leader on a young team

The heat is going to be very tough for some teams. After a four-month layoff and no real friendlies to prepare for this tournament, adjusting to meaningful games in the heat of Florida is a massive challenge.

New York City needed to create more chances. On the few it created, it was denied by Blake. But NYCFC has now lost its first three games of the season. This season is going to be shorter and these losses are far more costly. Another loss and the playoffs are going to slip quickly out of reach.

There have been some compelling stories in American soccer in 2020. Pulisic’s rise within one of the world’s “super clubs,” the coaching accomplishments of Jesse Marsch and Pellegrino Matarazzo, MLS being the first men’s league in the USA to return to play, and the emergence of Gio Reyna are all the most talked about ones.

But Antonee Robinson is without a doubt one of the best. Wigan Athletic’s American left back has been terrific since the restart. While that is interesting enough, the context is everything.

Consider in January he was supposed to earn a seven-figure transfer to AC Milan. That deal collapsed when the medical in Italy detected an irregular heartbeat. During COVID shutdown, Robinson underwent a procedure to correct the irregular heartbeat. When played resumed, Wigan was in a relegation battle but with four wins in its first five games since the restart, things appeared to be in a good situation. But then an ownership and financial scandal now has the club staring at a 12 point deduction with speculation growing that Robinson will be sold soon after the season.

Attitude from every single lad has been different class, all we can do is carry on the fight ???? pic.twitter.com/pDPy8rMaXw

That is an extremely difficult set of circumstances thrown at Robinson and he has handled it all extremely well. But he always has in his career. When he was a teenager, he had to undergo a risky microfracture surgery that jeopardized his career before it even started.

Like he did then, he has rebounded impressively.  He is currently on the Championship team of the month. He has adjusted his game and is playing differently. Normally he was known as a fullback who could use his speed and athleticism to burst forward into the attack but in his current run, his defensive numbers are standing out.

It is likely that Robinson will be on the move this summer and joining a Premier League club is very realistic at the moment.

Duane Holmes hasn’t had an easy going for Derby County since the restart. On Wednesday, the American playmaker was taken out in the 42nd minutes. Following the game it was announced that Holmes picked up a hamstring injury and is doubtful for Derby’s next game on Saturday vs. Brentford.

With that win, Austria Vienna is into the final of the Austrian Europa League playoff final where it will meet Hartberg (first leg on July 11, second leg on July 15). Should Palmer-Brown and Austria Vienna be successful, it increases the odds that Palmer-Brown will remain at the club next year with an extension of his current loan from Manchester City.

This has been the best season of Palmer-Brown’s career and he’s quietly been doing it under the radar. Austria Vienna is typically one of the better clubs within the country and Palmer-Brown could be a player that helps the club find more success next year.

Rough game for DeAndre Yedlin who earned the start for Newcastle United against Manchester City. The Seattle native hasn’t played much recently and will want to forget Wednesday’s 5-0 loss. Yedlin wasn’t good but was far from the team’s only problem.

Weston McKennie, David Wagner and the rest of Schalke are heading into rough times. This club could very well face a relegation battle next season. At his age, McKennie is one of their most valuable assets. It is very easy to see him getting sold.

"We're in a financially critical situation."

Will Zack Steffen head to Manchester City to be the backup goalkeeper? This report says so. He’s beyond the age where being on the bench, even for a great club, is going to offer him much. But perhaps his knee has been giving him so much difficulty that maybe avoiding the wear and tear of regular games makes sense for a season.