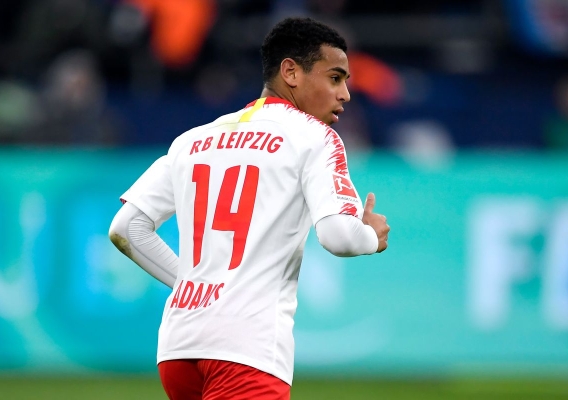 In his weekly column, Brian Sciaretta looks the numbers behind Tyler Adams at Leipzig, Miazga and Holmes helping each other, big weekends from Wooten and Palmer-Brown, on much more.
BY Brian Sciaretta Posted
April 01, 2019
1:00 PM
EVEN WITHOUT the injured duo of Weston McKennie and Christian Pulisic, it was an eventful weekend for Americans abroad. By now everyone has seen the assist from Tyler Adams but even going beyond them, there was still plenty of noteworthy performances.

Not everything was great, of course. And let’s get the bad news out of the way first.

In Germany, John Brooks and Wolfsburg lost in heartbreaking fashion to leaders Borussia Dortmund 2-0 with two late goals. Fabian Johnson and Borussia Monchengladbach fell to Fortuna Dusseldorf 3-0 with Alfredo Morales not even dressing for the victors.

Josh Sargent saw a few mop-up minutes for Werder Bremen’s 3-1 win over Mainz. The best news from that game is that Aron Johannsson was finally healthy and went as an unused substitute. Bobby Wood didn’t dress for Hannover’s 1-0 loss to Schalke – with Hannover trying to make a claim as the worst Bundesliga team in over a decade.

For a trio of Americans trying to make their case to be part of the U.S. national team, it wasn’t a great weekend. Tim Weah did not get off the bench in the Old Firm derby as Celtic won 2-1 over Rangers. On Monday, Romain Gall did not play for Malmo in its season-opening 1-1 draw Haecken. Joel Sonora started for Talleres against River Plate but were overmatched at home in a 2-0 loss.

After a knee injury, Danny Williams was able to make his first appearance since early December for Huddersfield when he came off the bench in the 80th minute of a 2-0 loss to Crystal Palace. The loss, however, officially relegated Huddersfield out of the Premier League for next season.

There still was plenty of good news

“The Assist” from Tyler Adams


Tyler Adams had another great game for RB Leipzig in a 5-0 thrashing of Hertha BSC. The numbers Adams is putting up at Leipzig are phenomenal.

Of course, everyone has seen the assist by now. In case you haven’t, here it is again. It’s one of the more incredible plays made by an American player in quite some time.


This assist from Tyler Adams for RB Leipzig .. wow pic.twitter.com/52S8EFh4fM

But the assists are nice, but Adams brings a lot of cohesion to the team and Leipzig’s performances with Adams on the field are almost unbelievable. Here are some nuggets for you.

Adams is certainly crushing it right now but that brings about talk over his position. The decision of U.S. manager Gregg Berhalter to play Adams at right back was controversial but a little patience is necessary. It was one friendly at the start of the cycle. Adams still had an astronomically high 119 touches in the game.

Berhalter certainly did not sound married to the idea of Adams as a right back and fans shouldn’t think Adams will be glued to the backline. It was a worthy experiment and it probably could work well against a good number of opponents where the U.S. team will control possession because Adams will essentially play as a No. 6.

The problem is what happens when the team plays against high quality opposition? As seen in the staggering numbers above, that defensive edge is where Adams shines the most. Berhalter seemed fine with moving Yedlin to right back against a better Chilean team despite everyone thinking Yedlin was a winger. There is no reason to think Berhalter won’t be flexible.

Holmes & Miazga have big games to help each other


In the Championship, Duane Holmes at Derby and Matt Miazga at Reading both had huge games to help each other. Holmes was massive for Derby in 6-1 romp over Rotherham United. Rotherham was chasing Miazga and Reading for survival but this result gave Reading the opportunity to move further away from the relegation zone with a win. Reading seized that opportunity with a 2-1 over a Preston North End team that was competing with Derby for a promotional playoff spot.

Reading looks like it will avoid relegation and Miazga has been instrumental in the club’s improvement. On Saturday, the New Jersey native had a game-high nine clearances and three tackles (tied for a game-high).

Holmes, meanwhile, had a goal and an assist as he continues to impress under Frank Lampard. It remains to be seen where or if Holmes is on the U.S. national team depth chart but it is certainly possible that following the Gold Cup the pool might expand a little as the team has friendlies and the CONCACAF Nations League to work with. For the Gold Cup, Berhalter has only had January camp and one FIFA window prior to the start of Gold Cup preparations.

If Holmes continues to impress for Derby, there is certainly no reason to rule him out for a call-up.


Erik Palmer-Brown had another important outing for NAC Breda over the weekend in a 1-1 draw with VVV-Venlo. There is no saving NAC Breda from relegation but Palmer-Brown is only at the club on loan from Manchester City. If he plays as well as he did on Sunday, he will put himself in line for a better loan next season.

In the game, Palmer-Brown went a full 90, had a staggering 10 clearances, blocked 3 shots, had 1 interception, won 60% of his duels, and had a 92% pass completion percentage.

The former Sporting Kansas City defender needs to play on a regular basis and his minutes have increased the second half of the season. He probably won’t move to a Top 5 league but he will have interest from places where he can play.

Internationally, Palmer-Brown should be a leader of the U-23 team. He has the experience of two U-20 World Cups and while he hasn’t earned the attention of many other young Americans in Europe, his ceiling is still high.


Andrew Wooten has played one time for the U.S. national team. At 29 and with a new manager at the helm, that is probably all he will ever play for the Stars and Stripes.

But right now, Wooten is Superman for his club, Sandhausen as he is almost singlehandedly saving them from relegation out of the 2.Bundesliga. Three games ago, Sandhausen was given slim odds to stay in the league but on Saturday the club won for the third straight game to move two points clear of the relegation zone.

Wooten has scored in each of the three wins and two of the goals have been match-winners in one-goal games. In Saturday’s 2-1 road win over Ingolstadt, Wooten scored in the 90th minute to give his club a valuable three points. His 11 goals on the season have him eighth in the 2.Bundesliga in goals.

It was a very nice finish indeed.


In the 2.Bundesliga, Sandhausen moved out of the relegation zone thanks to Andrew Wooten’s 90th minute winner. Wooten (Age 29, 1 #USMNT cap) has 11 goals on the season which is 8th highest in the https://t.co/KJZnsneFZ4. He has goals in 3 straight, all big wins. Today’s winner pic.twitter.com/YNmPXnq2yU


Christian Cappis made his first career professional start for Hobro on Saturday in a 3-3 draw against Vendsyssel. The Houston-area native went 70 minutes and the result helped Hobro in its quest to avoid relegation.

This is very important to the U.S. U-20 team as Cappis recently was a standout at the team's last camp where he scored an equalizer against France and a winner against Japan. He is in a tough competition to make the U-20 World Cup roster and head coach Tab Ramos wants his players to be playing regularly. If Cappis continues to start for Hobro, he will be tough to leave off the team after his recent camp.


Novakovich and Green get lucky goals

Sometimes its better to be lucky than good. Such was the case for Americans Andrija Novakovich and Julian Green who scored in unusual ways.

Novakovich scored his eighth goal of the season on Saturday when he took advantage of a dreadful goalkeeper error. Fortuna Sittard lost 3-2 but Novakovich is having a good season for Fortuna and is only at the club on loan. He should be in good position for a step up (or a return to Reading) next season. After scoring impressive goals this year, he earned his luck.


Not quite a goalazzo from #USMNT & Fortuna Sittard forward Andrija Novakovich but he was in the right place at the right time to make the keeper pay for a massive error w pic.twitter.com/eIOi4G1OkP

Meanwhile Julian Green also saw his shot take a fortunate bounce for a goal as his Greuther Furth played to a 2-2 draw with Arminia Bielefeld. Green has three goals on the season for midtable Furth.


Check out this shot from Julian Green today. Off the post, off the keeper, into the goal. A rocket from the Florida native helps Greuther Furth to a 2-2 draw vs Arminia Bielefeld pic.twitter.com/Dz7Q7cv6RS