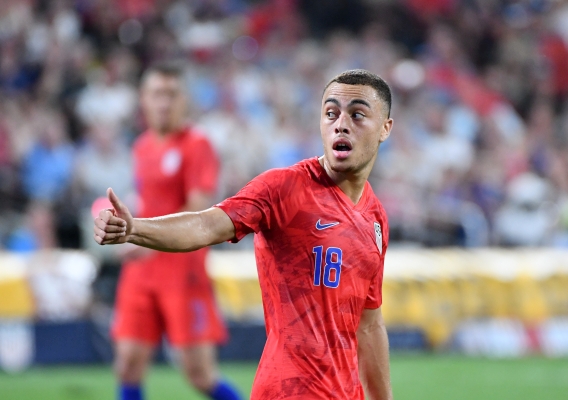 Sergino Dest will represent the United States national team moving forward. The annoucement came on Monday and it brings a bit of welcome news to a team that needed some. ASN's Brian Sciaretta gives you his thoughts.
BY Brian Sciaretta Posted
October 28, 2019
10:00 AM
ON MONDAY MORNING, Ajax fullback Sergino Dest announced that he had made his decision over his international future and that he has opted to represent the United States over his native Holland. The decision helped provide a needed boost the U.S. national team.

Dest, 18, has enjoyed a breakthrough in recent months where he as earned the starting right back position for Ajax and has impressed in both Eredivisie and Champions League games.

While he was born and raised in the Amsterdam area, Dest’s involvement with U.S. youth national teams is extensive. In 2017 he played for the U.S. team at the U-17 World Cup. Earlier this year, he played for the U.S. U-20 team at the 2019 World Cup. In both occasions, the U.S. team advanced to the quarterfinals. In September, he made his senior team debut for a pair of non-cap tying friendlies.

But as Dest became more successful, the Dutch federation began its public pursuit of Dest in hoping to convince him to use his one-time switch of national team affiliations.

Here are a few thoughts on the matter


While Jonathan Gonzalez opted to leave U.S. Soccer for Mexico in 2018 and Neven Subotic left for Serbia in 2008, U.S. Soccer’s record with dual nationals is actually strong despite the two high-profile defections.

This year, it has brought in players like New Zealand-born Tyler Boyd (whose stock was soaring with Ankaragucu in May) and American-born, English-raised Duane Holmes who has been effective with Derby County.

But this dual national recruiting win is unique for a variety of reasons. It essentially involves having a player commit to the U.S. program over Holland where that player was born and raised in the Amsterdam area, was a Champions League starter for Ajax at 18 years old, and had concrete and public interest from a Dutch federation that is has far more prestige in the sport compared wtih U.S. Soccer. With all of those factors working against U.S. Soccer, U.S. Soccer pulled it off.

When looking at some of the other recruits, Brooks and Johnson had youth national team interest from Germany but not to the degree of interest the Dutch federation showed in Dest. Also, neither Brooks nor Johnson started for any of Germany’s biggest clubs. Ajax, meanwhile, carries the prestige of being a prominent starting-point for many of Holland’s best players.

Dest may or may not work out. He might never reach the level of other dual nationals who have worn the U.S. national team jersey. You can only judge these things in the moment they’re won and right now, this was the most impressive recruiting victory.

Won at the youth levels


For sure, Earnie Stewart and Gregg Berhalter deserve credit in how they handled this in recent months. These two essentially sealed the deal and it likely helped that both players have ties to Holland. Obviously Stewart has a background very similar to Dest – born in Holland to an American father and grew up playing the sport professionally in that country. Stewart also became a technical director to several Eredivisie clubs and is well connected there. Berhalter began his career in Holland where was successful before moving to Germany and England.

Berhalter and Stewart called Dest up shortly after he made his professional debut. They also were publicly understanding when Dest wanted to take the October window off to think about his future. They also flew over recently to make a final pitch.

But in not taking anything away from the good job Berhalter and Stewart did in this case, the most important factors in winning Dest’s commitment were at the youth national team levels. The John Hackworth’s 2017 U-17 World Cup team and Tab Ramos’ 2019 U-20 World Cup team gave Dest many positive experiences with U.S. Soccer. It allowed him to bond with other top young American players and bond with the crest.

So while he built a deeper relationship with U.S. Soccer, the Dutch federation was nowhere to be found.

There are plenty of other factors here that helped U.S. Soccer in this case too. The fact that Dest had an American parent was key. It also helped that his generation of American players is promising – to help give him confidence in the program’s future.

But it can’t be understated enough that getting these players into the system at younger ages help build a real bond that lasts.

Letting Dest decide on his own


It was also refreshing that U.S. Soccer did not pressure Dest and did not try to call him up to the full national team in a cap-tying situation before he was a first team player - just for the purposes of cap-tying him.

Instead, U.S. Soccer allowed Dest - at a ripe stage of his career and after giving him all the time he wanted to think about it - to make an informed decision. Dest is now a U.S. national team player not because U.S. Soccer won a mad race to cap-tie him, but because after time to think, Dest made the decision that this is what he wants to do with his international career.  Sure, Holland is a tough team to make but Dest could have waited longer to see if he rose to that level. Instead, he decided that this is the team he wants to play for.  That only increases the likelihood that Dest will be at his best when playing for the U.S. team.

Dest won’t turn the team around


The last international window was concerning for the U.S. team and it left many supporters correctly feeling disappointed. The lack of “desire” among the players was particularly alarming.

Dest will not change that. The problems of the U.S. team have not been fixed and there is a ton of work to be done to turn the team around. The problem at the moment is that the players as a unit are playing below the sum of their parts.

But if or when the team gets things turned around, Dest will be an important part of the equation. He brings a ton of talent and he has a very high ceiling. He is also likely thinking about things in the long-term too. He will be 21 at the 2022 World Cup, 25 when the U.S. cohosts the 2026 World Cup, and 29 at the 2030 World Cup.

But for now, this is a nice win for a U.S. team that still has just as many challenges as it did before Dest decided to play for them.