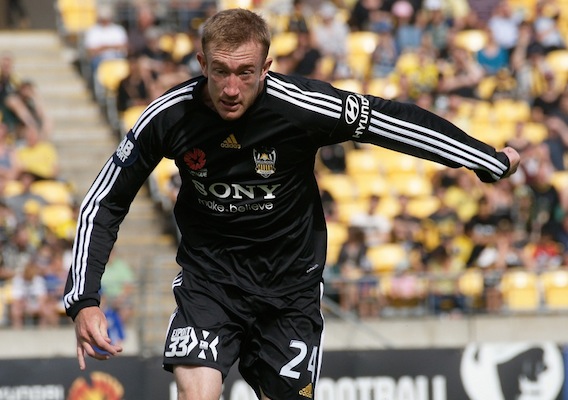 An American Athlete Finds His Way Down Under

Alex Smith moved to Australia for reasons other than playing soccer professionally, and yet today he's doing just that as a midfielder for the A-League's Wellington Phoenix.
BY Brian Sciaretta Posted
October 22, 2012
9:56 AM

The new A-League season is now underway and the league’s only American, Alex Smith, has helped Wellington Phoenix get off to a strong start.

Smith, 27, joined the league's only New Zealand-based club prior to the beginning of last season. Although he was signed as a forward, the club converted the former Souther Methodist University player to central midfield where he has excelled. Last season, he was a key factor in the club’s surprising best ever fourth-place finish.

This season has begun in a similar fashion. Although the Australian media picked the Phoenix to finish near the bottom of the table, the team has five points through three games.

“It actually spurs us on a bit,” Smith told ASN on the initial low expectations of Wellington. “I think we thrive with everyone saying we’re not going to do any good. It seems to happen every year where they give us the wooden spoon. They think we’re going to be eighth or ninth but we finish pretty high. It’s been a good start this year, definitely.”

Smith is very optimistic on the team’s chances this year.

Smith, who played defensive midfielder last season, sees his role within the team is evolving. Wellington coach Ricki Herbert moved his charge into a slightly more attacking position to start the 2012-2013 season. So far it has paid off, as he has created numerous chances in the first three games including forcing a handball to draw a penalty in a 1-1 draw with Melbourne Heart.

But Smith is a well-rounded player, and this was most apparent in the opening game of the season when Wellington cruised to a 2-0 win at home against Sydney FC. That game drew enormous attention in Australia and New Zealand because it was the debut of Alessandro Del Piero, the league’s marquee, David Beckham-like, signing this past summer.

Herbert tasked Smith and Maltese international Manny Muscat with shutting down Del Piero. For the most part, the pair succeeded in limiting the Italian's playmaking ability. Smith also nearly had a goal when his header in the first half forced a great save from Ivan Necevski.

“It wasn’t about beating him,” Smith said of playing against Del Piero. “We were just trying to contain the impact he had on the game. It was an absolute honor to play against him and match up against him. You could tell he’s a world-class player. Just the way he saw the game was pretty incredible even though I was trying to get the ball away from him.”

“He’s a great signing for the A-League,” Smith added. “Hopefully it inspires a few more people to come over and take notice of our league. I think it has already. It’s just a great situation for everybody.”

While Smith did play a big role in spoiling the star’s debut with Sydney, he is happy that the former Juventus leader along with other big names like Shinji Ono and Emile Heskey made the decision this year to play in the A-League.

It's been a long road to Australia for Smith. He played under current FC Dallas coach Schellas Hyndman at SMU, but lost his college eligibility after training with Shrewsbury Town and Walsall in England. Smith tried to play in MLS with FC Dallas but was not focused and simply quit soccer. He moved to Australia for no other reason than he enjoyed himself on a vacation there.

A local scout for a lower league team discovered Smith during a pickup game. He excelled there and eventually moved up to the A-League. His first team in the top flight was with Gold Coast United who, in order to free up a foreign roster spot (each team gets five), bought out his contract. Smith found success, then moved to Wellington. Smith’s contract is set to expire at the end of this year but he hopes to open negotiations soon for a long-term deal.

“As a footballer, you’re always thinking about the future, especially when you’re on a one-year deal,” Smith said. “Hopefully I can keep playing well and sit down with the club, hopefully sooner than later, to see if I can stay here beyond this year. I love Wellington and I love the club. I love everything about it. I don’t really see a reason to go anywhere else.”